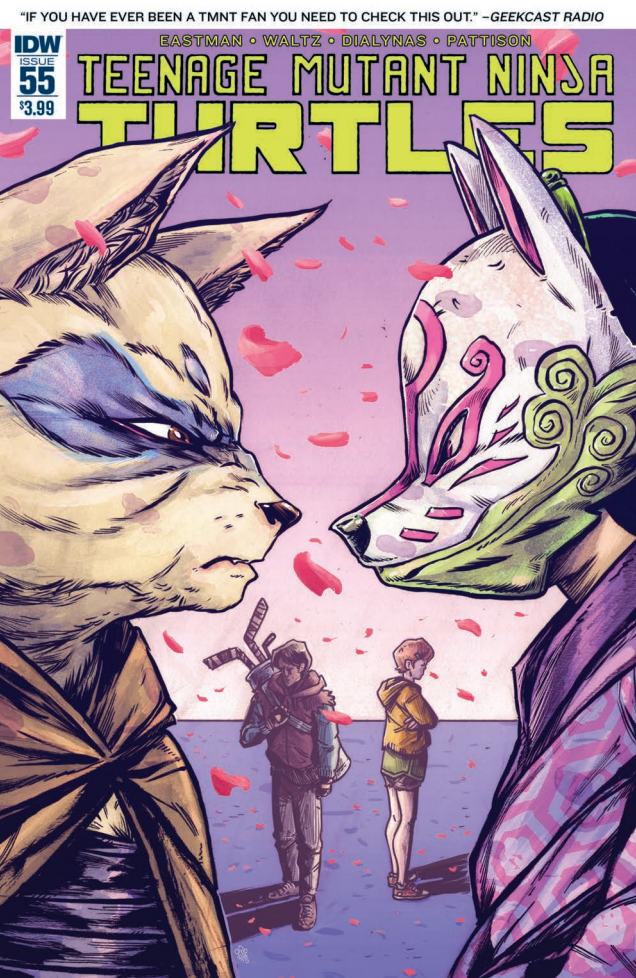 This world of the Turtles…it’s pretty entertaining, y’know?

Tom Waltz & Kevin Eastman have built quite a cast of supporting characters for the Turtles over the past few years with this run at IDW, many of which have become as compelling as the heroes in a half shell themselves. As I read this issue I found myself impressed with the depth of characters across 4 different story beats, each one hooking me in a different way and getting me interested in what was coming next for that particular character or group. There’s quite a bit going on in issue #55, with several different settings and groups in play, but Waltz bounces around deftly. At no point does this issue feel jerky or like it has odd pacing with the different story beats, nor is there a weak link in the chain of not-fully-related events. This is a testament to Waltz’s work building this world in Teenage Mutant Ninja Turtles, a world that doesn’t need the primary 4 on a page to make that page work. In fact, there were points I hoped I was reading a spinoff title so that I could simply get more story about that particular plot beat….while not sacrificing pages for any other subplot either!

The strength of Waltz’s writing is in how likable he makes these characters without making it sappy. This comic has some grit to it without being too dark, like some kind of noir take on TMNT, but it isn’t a fluffy take either. What Waltz has done with this licensed title is very impressive, and an easy argument could be made that this is the best licensed book in comics right now. He writes the Turtles the way creators attack creator-owned books, really digging deep into the characters and not staying at the superficial level that some licensed books do. It is obvious that nobody is leaning on the title to sell this book – they are building compelling stories with strong characters that will win over more than just die hard TMNT fans looking for nostalgia.

Michael Dialynas and Ronda Pattison handle the art duties in this issue well, capturing the personalities of this wide cast of characters nicely. Dialynas’ style suits the story well, and he pencils this group with a great amount of skill. He handles the action sequences of the issue very well, but I think his work is strongest during scenes with April & Casey. He shows a great deal of range throughout the issue, and Ronda Pattison rounds out the artwork nicely with her colours. She uses a palette that maintains the cartoon-ish feel of the TMNT world without making it neon crazy silliness. That’s not an easy balance to strike and she does it will in this issue.