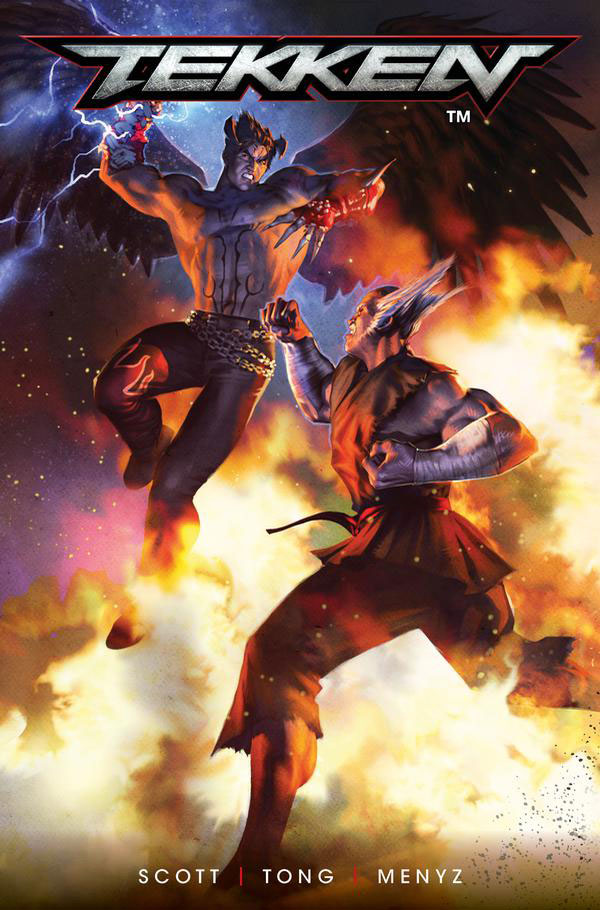 Where is Jin Kazama?

After his attempt to rid himself of the Devil gene, Jin has made himself a wanted man. In an effort to reclaim him, Kazuya begins hunting down Xiaoyu with the help of Anna Williams. Nina and Paul, though, have other plans, and as they all meet with the long gone Jin, his father shows up with a menacing army of robot soldiers. And Anna.

Cavan Scott had a lot to handle in writing this story, given that there have been numerous games and plot changes in Tekken’s 23 year history. What Scott gets right is the complicated and detailed history between the characters, from the Mishima genes to the Williams sisters’ feud. Each story element feels like it fits firmly within the canon of this longstanding tournament, and I think that is a wise choice. However, I also see how this could present a challenge for someone who is unfamiliar with the games, and once you remove that context there may not be as much of a grab depending on the audience.

I like Andie Tong’s grasp of action, but there are times when the art feels awkward or stiff. Whenever things have slowed down, I don’t get a sense of building drama. Instead, I am able to pay more attention to details that don’t quite land for me. In a fight scene, Tong is an excellent choice, and I can even see the signature styles of the characters at play. Otherwise, some moments don’t feel quite as cohesive for the entire story.

Tekken is a rough though stylish video game series, and Marcio Menyz gets that just right through colors. The urban cityscapes match the darkness evident in the Mishima line, as well as the often sinister undercurrent of the King of Iron Fist tournaments. Menyz touches on the spirit of the series and its penchant for punches and explosions through dark these dark colors.

If you’re familiar with Tekken lore, I think this series will be more of a grab for you. Otherwise, there’s a lot of history to fill in blanks and the story may seem like a more difficult investment. It hits the beats regarding fight scenes and motion, but more calm pages seem discordant with the rest of the issue. I think there will be plenty of action ahead that captures a fighting spirit, but Tekken may be a hard sell for newer readers.