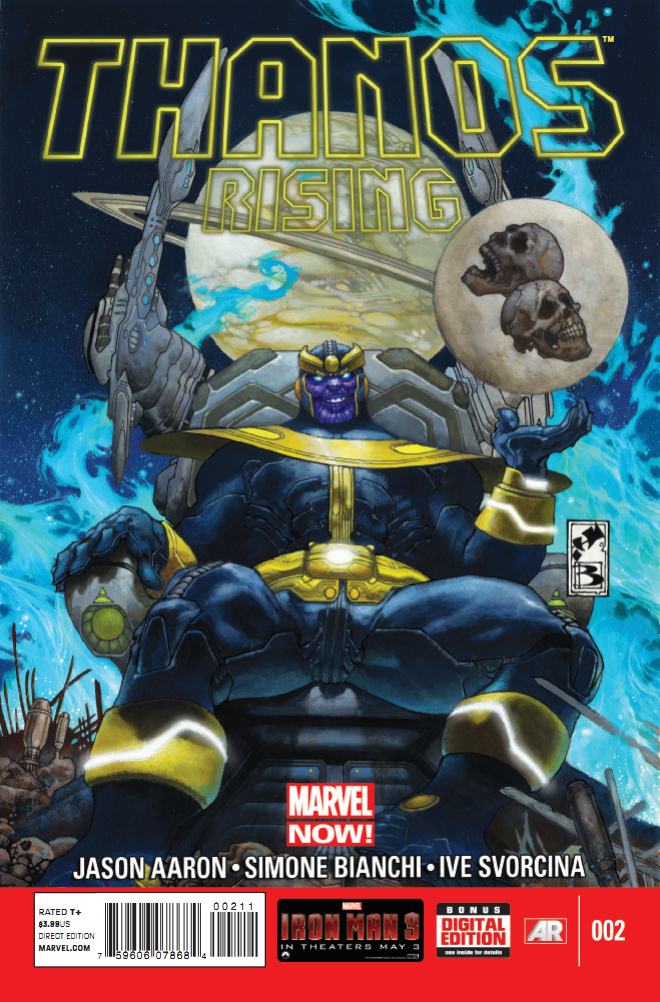 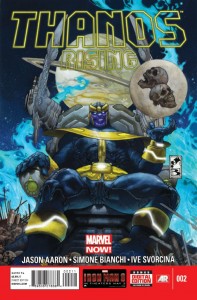 Nature versus Nurture is a fascinating framework for examining human nature. How much of who we are is destined to be, and how much comes from the individual choices we make? Thanos of Titan is so undeniably Evil-with-a-Giant-Capital-E, and has been for so long, that it seems clear he is 100% Nature. No amount of nurturing could save him. This issue chronicles Thanos’ “coming of age” as a monster, and rather unexpectedly left me feeling incredibly sad for the Mad Titan.

Jason Aaron did a lot to surprise me, if I’m honest. My initial reaction to how dark things became was “well THAT escalated quickly”, which I know shouldn’t have been the case since no book about Thanos is going to be about butterflies and rainbows. His grim adventures with Creepy Girl Who Totally Isn’t Death just go so wrong so quickly, it was jarring. Until the last few pages, the first issue could have been called THANOS OF TITAN: FRIENDSHIP IS MAGIC. I think the dramatic shift in tone helps drive home the inevitability of Thanos’ descent.

I’ve never really considered Thanos a tragic villain, but Aaron gives him pathos. He knows what he’s doing is monstrous, and he does not want to be a monster. He tells himself he’s doing these things for the sake of knowledge. When he finally accepts the awful truth that he is enjoying what he is becoming, he desperately tries to reach out. The “I just wanted to be loved” motivation for a supervillain can be a clichéd trope if written too haphazardly. Aaron does it well, as I was overwhelmed with sympathy for the lost and lonely Thanos. Even on that gruesome final page, I still felt bad for him. He knows there is something wrong with him, something missing, and he wants nothing more than to find out what and fix it. But we, the readers, know that Sui-San’s little boy never really had a chance.

Simone Bianchi’s art manages to make even horrific torture chambers look pretty, and that is a feat worthy of recognition. The varied settings of Titan are distinct and beautiful. Most of all I enjoyed Ive Svorcina’s colors. The bold jewel tones and the mixture of warm and cool color palates make the art pop. Again, it makes the immensely disturbing oddly nice to look at.

Weaving a backstory for an established villain like Thanos is not an easy task, and Aaron should be lauded for delivering such a compelling personal narrative for a character who becomes the Avatar of Death. We know where this ends for Thanos. This is only issue 2 of 5, and I’m overwhelmed with morbid curiosity for the next stage of the journey.