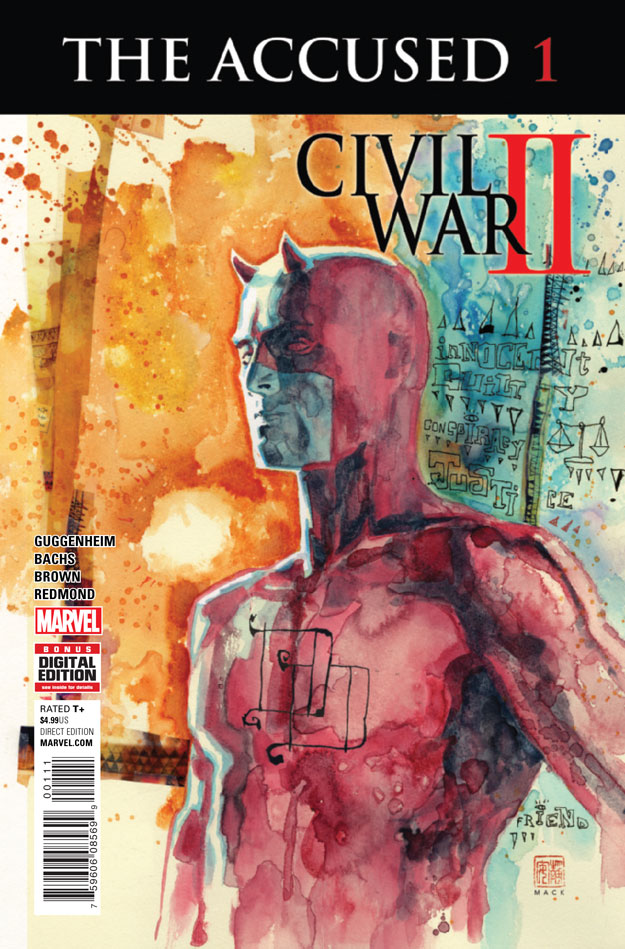 After Hawkeye’s finishing blow to Bruce Banner, Clint stands trial for his actions. Will he be charged or acquitted of murder?

Guggenheim,  Bachs, Brown and Redmond investigate the scenario through a summed up court case with Matt Murdock leading the prosecution. The Accused may be an extension of Civil War II, but it is one you can easily read with no knowledge of prior events due to a summation at the beginning.

For the most part, I like what Guggenheim wrote. Matt’s need for a fair trial as well as his scathing questions to Clint bring a case ridden with conspiracy to a more level playing field. The quickness in which they go through the trial in this issue as well as the conspiracy crammed into it feel a bit weak, but the court scenes are well written. The Accused finds its strength in the debates it poses on its audience, like when is it okay to kill, what amount of premeditation is at play, and if Clint’s actions are justifiable.

The art is breathtaking. Choices like the arrow shaped panel, the style of all the characters, Captain Marvel gazing down at the viewer from above—Bachs and Brown are masterful at their craft. Pairing their artwork with Redmond’s coloring sets the scene on a whole different level. Redmond’s shadowing techniques are just hypnotic. Combining their efforts, they make the grimy backdrop of Hell’s Kitchen and Clint’s flashbacks mesmerizing.

My favorite scene is when Matt asks if Clint thinks what he did was right. There’s this pause; a dark orange background makes the lighter orange jumpsuit stand out; Clint’s pupils and irises blend in with the shadows of his face as the whites of his eyes pop hauntingly; His eyes darken to an almost complete black in the next panel as Clint says, “I honestly don’t know”. This is the most powerful moment created by the collaboration between Bachs, Brown, Redmond, and Guggenheim.