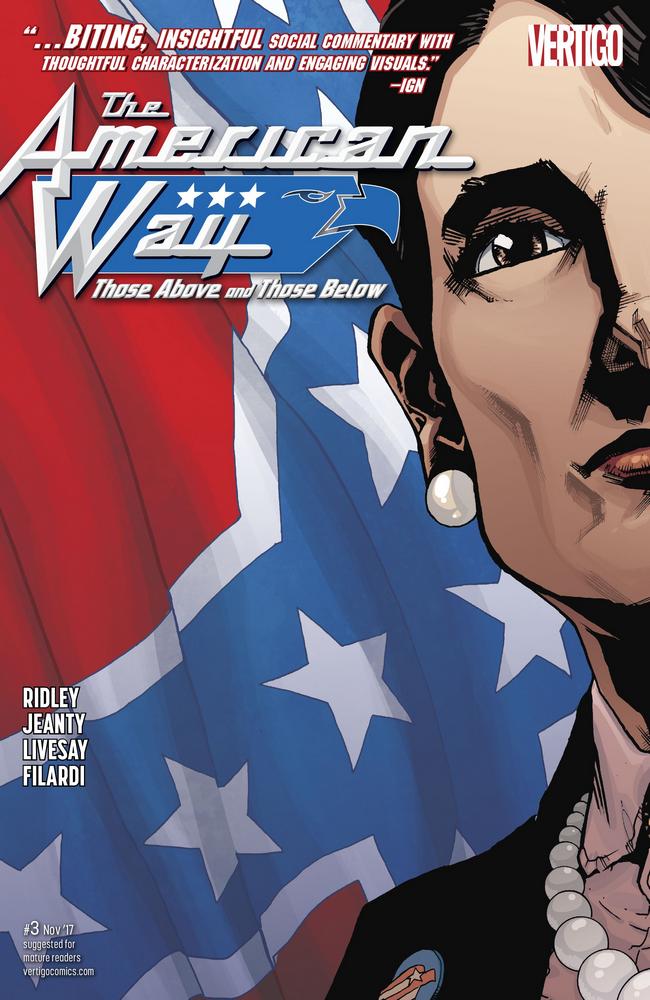 THE AMERICAN WAY: THOSE ABOVE AND THOSE BELOW #3
Written by John Ridley
Art by Georges Jeanty, John Livesay, Nick Filardi, & Travis Lanham
Published by Vertigo Comics
Release Date: September 27, 2017

The lines that separate Missy, Jason, and Amber are beginning to blur as conflict escalates around them. As one steps to the podium to declare her position, another questions her choices, and one tries to reconcile his alignments. Over time, those that surround them begin to weave these singular threads together, forcing each of them to confront a potential uprising.

The third installment of The American Way: Those Above and Those Below is a slight deviance from the preceding issues. Rather than a more honed focus on the three main characters, they instead fade more into the backdrop of the story, allowing other characters to emerge and add nuance to the overarching narrative. Everything that transpires seems to happen on a much slower scale than before, giving us time to see how our three protagonists are dealing with deepening problems and how secondary characters fit into this struggle.

John Ridley examines each character’s driving force and allows new perspective to influence the comic’s narrative. The emphasis placed on secondary characters rounds out the mission of the protagonists, offering a new perspective on each of their roles in the story. Ridley incorporates new faces in a way that better fleshes out the complexities of the politics which surround Amber, Jason, and Missy.

Ridley also creates this story with a heartbreakingly timeless feel. Though the years which dot the temporal setting of the comic are beyond my own existence, they feel starkly similar to current events. Even without knowing the direct impact of politics during the time that the story is set, it does feel as though it can fit into multiple historical eras. Ridley discusses the vilification of liberal or left causes as a tool for spurging nationalism, a story element which is vital to Missy’s character. Taking a group, often marginalized, and using their vocabulary or tactics against them is a tale as old as time, and what Ridley approaches is unsettling, though a nigh perfect mirror through which to examine our current epoch.

Georges Jeanty doesn’t seem to deliver the same caliber on pencils compared to the previous two installments of the series. Some characters’ expressions don’t quite match tone or dialog, even from the beginning of the issue. Crowd scenes are well executed, however, casting many people in diverse experiences, especially when a superpowered human decides to make his entrance.

John Livesay’s inks feel appropriately dense in this issue. They seem to have a quality which fits the themes of the comic and what it likely evokes in readers.  Through Livesay’s work we get to see a different dimension of Missy’s hesitance, Amber’s indecision, and Jason’s dilemma with how to deal with what is unfolding around each of them. Livesay feels particularly strong near the end of the issue as a superpowered individual attacks during a rally held by Missy. Lines are thick around the crowd, giving this character a significant presence as he uses his powers, a burning ember among them.

I like that Nick Filardi’s colors allow drama to take center stage. The overall scheme does not seem to change between panels, but I appreciate how muted earth tones keep the story from being too fantastical or completely bland. Filardi uses color in a way that feels like the characters live in the era their supposed to. Though the writing easily fits into now, this colorwork helps to anchor the story in its specific time period.

The American Way: Those Above and Those Below #3 remains an unsettlingly similar reflection of our own world. Though there may be some slight anachronisms, I can imagine characters saying the same things many people do today. This chapter explores the difficulty of choice and how oppressors can take our own language or actions and twist them to exacerbate bigotry. With the inclusion of more characters, I imagine that this comic will continue to address the varied ways each of us show up and why they matter in the larger scheme of social justice for all.