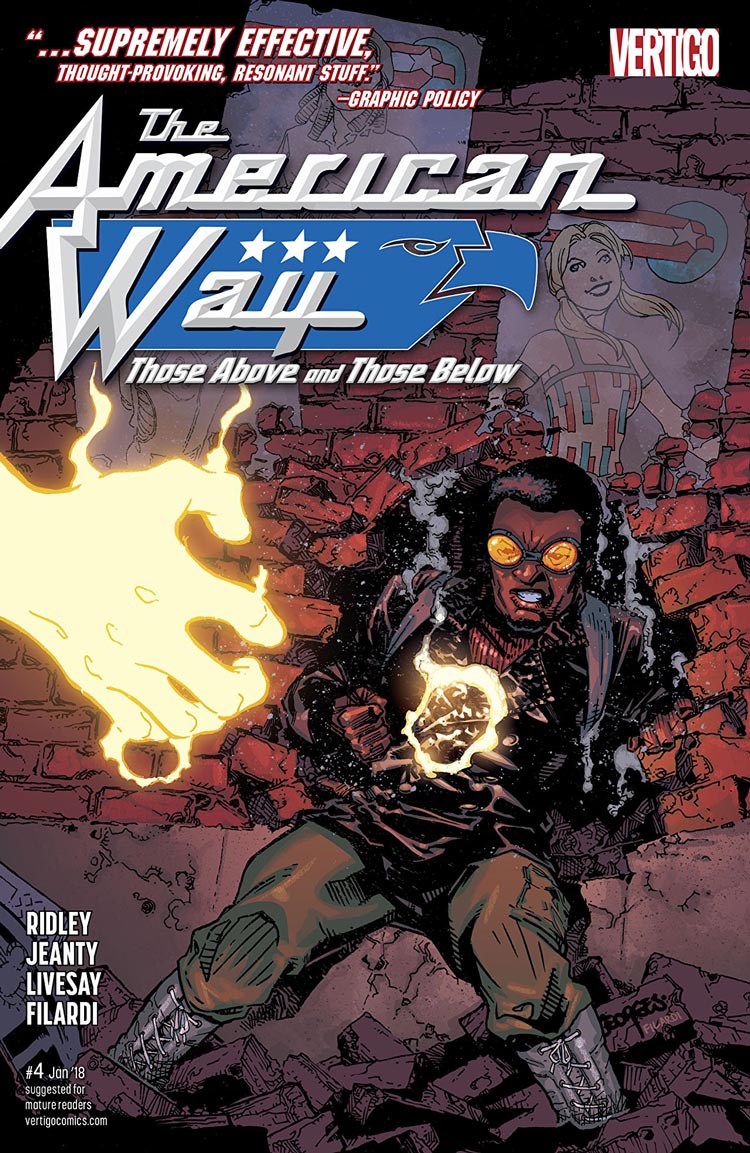 THE AMERICAN WAY: THOSE ABOVE AND THOSE BELOW #4
Written by John Ridley
Art by Georges Jeanty, John Livesay, Nick Filardi, and Travis Lanham
Published by DC Comics/Vertigo
Release Date: November 15, 2017

Jason tries to talk Amber away from the edge while a conversation with Missy is out of the question. Each of them are reeling from the fallout of the last issue, dealing with their own struggle and doing their best to fight for a world they believe in. Jason in particular decides to play detective and is immediately put in the crosshairs of this conflict.

Those Above and Those Below #4 is beginning to more closely tie its threads together. In particular, the relationship between the protagonists is one of the major plot elements and it underscores their actions in this latest issue. While they are all still dedicated to their plans and individual motivations, Jason, Missy, and Amber are feeling tremors that leave them unsettled and uncertain.

John Ridley finally brings our main characters together in a very revealing manner. Jason still occupies a sort of middle road between Amber and Missy, but this time we see the particular nuances of their perspectives. Jason rightfully calls out Missy’s racism and the fact that her own detractions against Amber are in many ways hypocritical. Ridley takes time to examine the nuances in the characters’ stances, leaving things far less clear cut than they may have appeared previously. In particular, Missy is much more overtly racist in this issue, showing that her advocacy of her people is underscored by bigotry, a hint we saw as early as the first issue.

Georges Jeanty’s pencils seem different in this issue. More of the people seem nondescript compared to the more detailed portrayals seen in previous issues. Amber in particular looks more worn down, though I can easily see how this fits into the developing story through this miniseries. Jeanty definitely gets the emphatic expressions of many characters, which is helpful for the more important emotional beats, but this issue also seems to capitalize less on these moments, leaving the art to feel less impactful.

Just as Jeanty’s pencils seemingly take on a new presence, John Livesay does not seem to be one to let up on inks. What such a technique means is that everything is treated as vital, and important facet of the story given the plot. Each scene has significant relevance, so casting everyone with heavy lines reflects the importance of every event. Livesay makes every panel feel as though it is an integral part of the story, and this consistency helps convey the emotional atmosphere of the comic from cover to cover.

Nick Filardi makes this issue far darker than any of the previous. Tonally, this use of color works to highlight the growing tension between the primary characters and the escalating issues that surround them. A very interesting effect involves Jason’s trip to Missy’s home, which is arguably the brightest scene in the issue. From a storytelling standpoint, it almost seems to address the fact that Missy’s true politics are coming out. Filardi’s use of shadowy color works well with the story at large and I like how it meshes with this particular chapter of the series.

I think there are appropriate stakes and developments for Those Above and Those Below #4. There’s a significant change from the previous issues and the ones that follow are sizing up to be monumental. I like that the politics are beginning to blend in a more intentional manner, and we get to really see how the protagonists of this series are truly connected, as well as who they may truly be. This ongoing political discussion is intriguing and, though heartbreaking, its parallels to our world now give it a hefty weight and relevance.