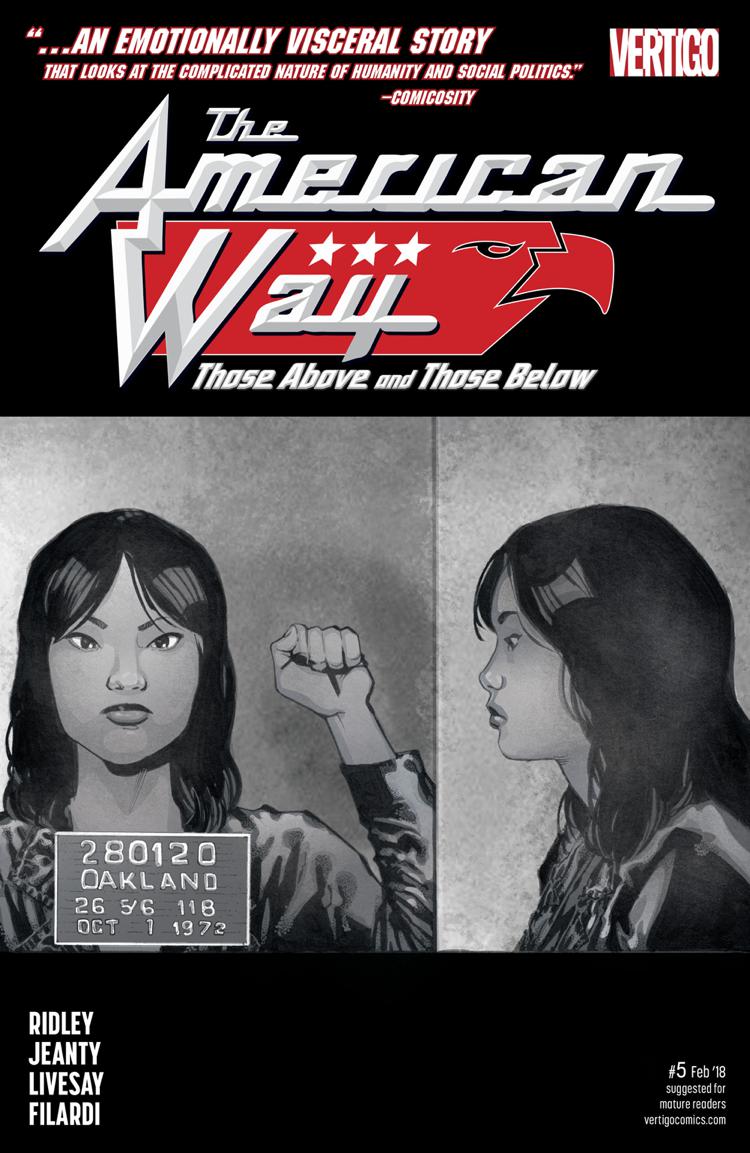 People don’t change; they just become more of who they are.

Jason’s fight with Samuel leaves him a bit worse for wear. Missy makes a declaration that immediately sets a racist audience against her. Amber has made a new choice. Each of these people are drawing closer to the end of their current dilemma and they are all finding the consequences of their actions are never what they expected.

This is arguably the best issue of the Those Above and Those Below thus far. The opening fight, the overlay of panels, and the development for each of the main characters are all stellar aspects of this story. The previous issue was an obvious build-up to where we are now, and it’s nice to see how things are coming to fruition. With one more issue left, I’m waiting with bated breath to see the conclusion.

John Ridley gives characters choices that are disparate from their original goals but that feel like natural progressions in the plot. Missy and Amber both turn things on their head, one with a revelation and the other with a declaration. Jason on the other hand is more steadfast in his ideals, but this seems to change in the last image of the comic. Ridley continues to write a story that capitalizes on the reality that life is pretty much making choices and dealing with what comes after, even if that means you come across a fallout.

Georges Jeanty is at top game especially in the opening pages. In seven pages, the fight between Samuel and Jason sets the pace for the rest of the issue through every punch and piece of rubble. Jeanty’s structure of this scene is integral to how the rest of the issue is perceived, particularly in the moments where Amber is shooting up and in the jarring final moments recounting Samuel’s loss of Avery. In these wordless pages, there is a meaning which pervades every other, a more literal account of fire, anger, and rage that provides the foundation for the metaphorical parallels which emerge later.

Through the rest of the issue, Jeanty captures violence and anger in many shades. There is the revolt of the crowd, the indignation of friends, and the dehumanizing tragedy of lynching. In all of these moments, the emotional fallout is palpable, which makes this issue compared to the others incredibly impactful.

Throughout most of this issue, John Livesay and Le Beau Underwood use a heavy hand on inks, further deepening the tone of the overall story. This changes in the final scene, where memory is represented by hazy, soft lines. Livesay and Underwood’s touch on this issue works well with the other layers both visual and written, helping to communicate the deep, affectual faultlines that run underneath the story and that give this comic its political and emotional significance.

Nick Filardi dims the lights on colors to incredible effect. Samuel is the only major representation of brightness, but the intensity in how he is crafted is reminiscent of actions fueled by passion. As a plot point, his image stands out against the desolate atmosphere in every other page. Compared to Samuel, the dark tones through the rest of the issue provide an appropriate atmosphere for the story’s elements. All of this comes together for a powerful effect as Jason reads Samuel’s journal. These pages have a slight glow to them, drawing upon his powers over fire but also the tragic circumstances through which he loses his brother. Filardi’s touch helps to evoke the right feelings at every turn.

Beyond the amazing introduction to this issue, two scenes stand out to me. For one, Missy telling her audience about the truth regarding herself, Jason, and Southern Cross is a telling demonstration of racism and the support of white supremacy. This part of our society is strong and endemic, but the crowd’s reaction to her shines a light on what happens when folks cater to the whims of bigotry in any manner. No one waits to hear Missy out; instead they immediately hurl epithets at her. This scene encapsulates the fact that when you have the support of bigots, their feelings are also conditional. One wrong move and they could immediately turn against you. This stands as a lesson not just for everyday people, but for comics in particular.

Second, Samuel’s journal shows something that was hinted at earlier in the issue. For most of this series, Jason has fought against violence on all sides, to the point that he is sometimes seen as a traitor. His devotion to making sure Samuel does not kill, going so far as to call him psychotic, clouds his discretion in understanding why his foe acts the way he does. He is not a wanton killer; instead, he is acting in revenge for his brother, a young man blamed for something he didn’t do and paying the ultimate price, one which many black people have faced. This recollection is vital because it peels apart justice and what it means to follow the letter of the law versus the intricate reality marginalized people face in America, in this case people of color.

The American Way: Those Above and Those Below has been a ride since its first issue. This creative team pulls together different talents to make this story what it is. I appreciate the parallels between each of the characters and the overt happenings around them. The creative departure in this issue is a sight to behold and certainly contributes to an exciting installment of the series. There’s no telling what’s up next, but this chapter of Those Above and Those Below makes me feel as though something incredible, even if heartbreaking, is in store for the finale.