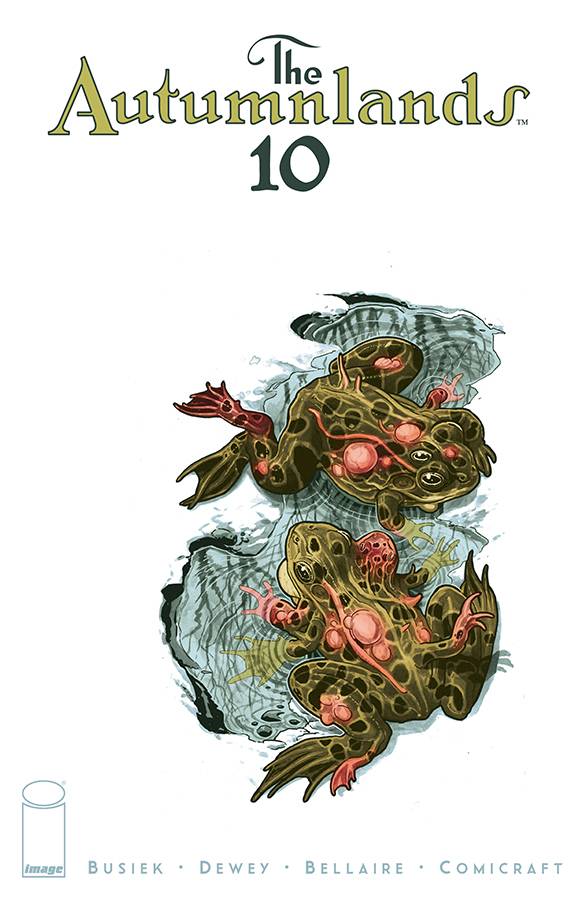 One of the best damn comics there is just keeps on truckin’ with another fantastic issue. Busiek, Dewey and Bellaire are an unstoppable force of awesome and The Autumnlands continues to impress me more with each issue that is published.

Busiek’s voices for these characters are amazing and the buddy duo of Learoyd and Dusty is one of my favourite character pairings in comics. Learoyd’s propensity toward profanity delights me to no end, as it isn’t something normally found in fantasy, but it works in The Autumnlands. His gruffness plays on Dusty’s youth perfectly and this man and anthropomorphic dog are growing to be one of the best relationships I’ve read in comics in the past couple years. The different patterns of speech and accents that the duo are coming across as they run into new characters keeps things interesting and you can immediately tell what accent Busiek is expressing with each species of animal. The new character Learoyd and Dusty stumble upon in this issue is a hilarious, over the top creature that took me by surprise and gave me a few chuckles as the issue progressed. Small moments with characters new and old are Busiek’s greatest strength, in my opinion, and the very conversational dialogue set in this fantastical world of anthropomorphic animals, magic and high fantasy is a perfect combination. This issue hits all the right story beats and I am simply blown away by how awesome Busiek’s work is in this issue.

The awesome doesn’t stop with Kurt Busiek. Benjamin Dewey and Jordie Bellaire, as they have since the first page of the first issue, deliver top flight work that rivals any other comic on shelves today. This is an art team that works immensely well together to build a world where both Dusty and Learoyd make sense and where the events of the final page just make sense. Fantasy stories are not easy, as they can get corny and clichéd very quickly. Dewey and Bellaire are what keeps that from happening. These visuals are so awesome that The Autumnlands could never be thought of as a generic fantasy tale. Many artists in this genre can either build the world or focus on the characters and this team can do both, seemingly with ease. They are master storytellers working with a great writer and the net effect is one hell of a good comic.

The Autumnlands #10 is a must read, as is the entire series for anyone who enjoys fantasy stories…and even for most who don’t. This comic is unlike any other on the stands today and Busiek, Dewey and Bellaire are delivering masterful work with each issue. I want issue #11 in my hands right now, and you will too after you give this one a read.