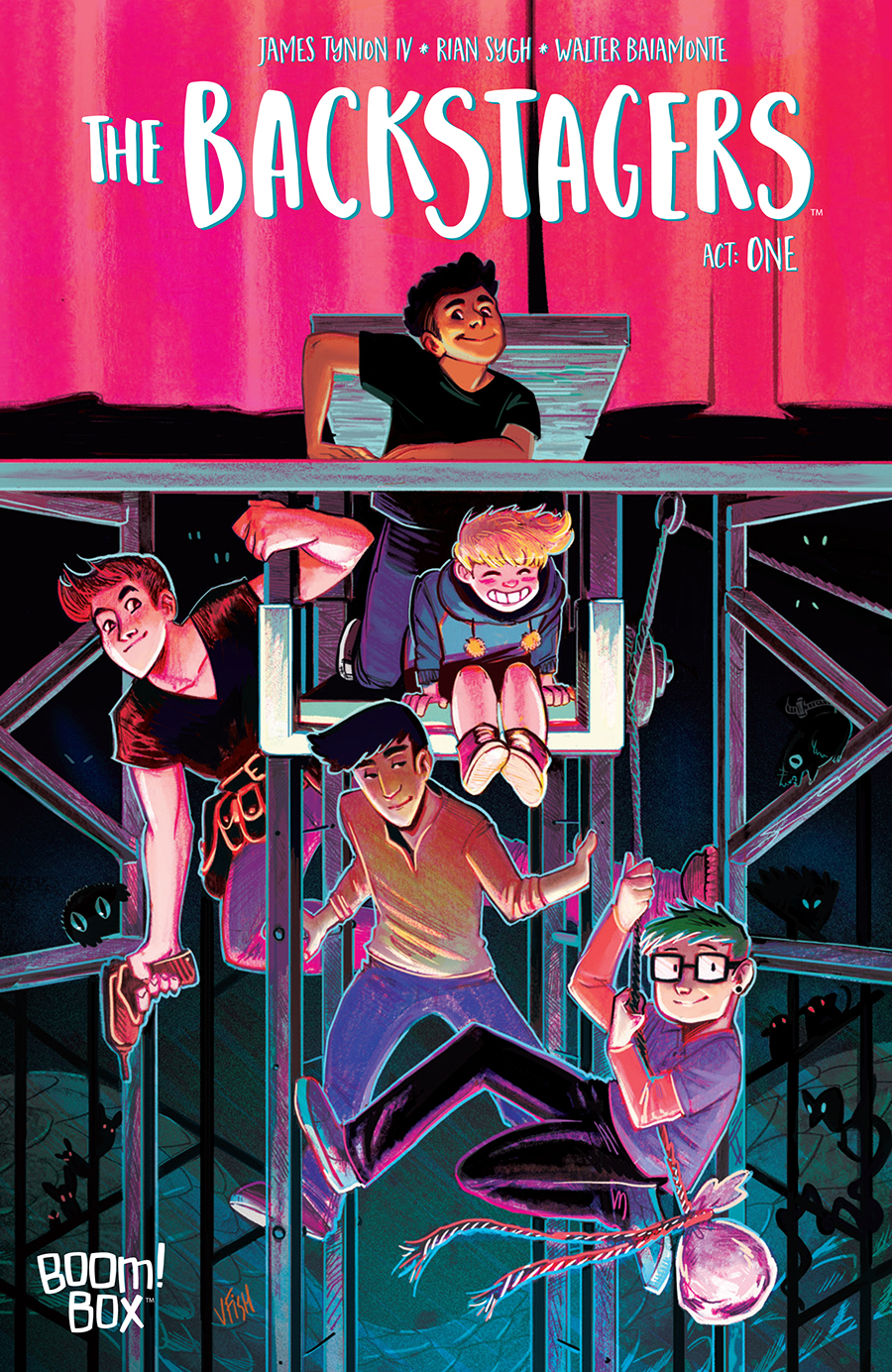 Jory is at an all-boys school and he is not too enthused. After finding a club her marginally fits in, he comes across the Backstagers – Sasha, Aziz, Hunter, and Beckett. After corralling a crew of tool mice, Jory discovers that he’s found his new home in a and wonderful strange place.

In a world where many comics are dominated by dudes, The Backstagers dash the status quo by incorporating young men who vary in terms of race and sexual orientation. There were many points in this issue that gave me a wordless joy that I hope many other young queer and/or men of color feel. I can see myself in Jory, which is not an experience I often have.

The ensemble of the major characters, especially the Backstagers, reminds me of parody animes that poke fun of male stereotypes in the genre, and the execution within this comic addresses not only stereotypes, but quashes them through the complex interaction and presence of all the characters.

James Tynion has written a comic that feels real and reminiscent of queer men’s daily life, in the sense of both positive and negative experiences. The McQueens are what the queer men around my area ironically call the “Alpha Gays,” men who assume authority and superiority that was never really earned, while the Backstagers represent the parts of our community who accept each other despite the lessons we learn from mainstream media and the gay community. These distinctions are vital from a narrative standpoint, and I appreciate that Tynion captured them within the realm of the stage, a world in which queer men thrive but that also holds its own biases and misunderstandings.

Even though most of the characters don’t drop a beat and much of the story is assumed normal, Ryan Sygh and Walter Baiamonte infuse fantastical elements from cover to cover. Sygh captures the diversity of human form and environmental elements like clutter and various objects, moving from a state of structure to one which is much more diverse by the end of the issue. This visual journey reflects Jory’s own trip into the world of the Backstagers from what he considered “normal” before and provides an excellent artistic framing in conjunction with the story.

Baiamonte’s colors are really just delightful, and there’s not much more praise I can offer beyond that. I like the shifts in schemes that accompany emotional and tonal changes in each scene, particularly the ones meant to portray grandeur and admiration. Baiamonte helps to convey the adventure and kinship evident between the Backstagers, even as Jory relatively quickly comes into the fold.

I remember when Tynion announced The Backstagers, and I remember being excited. Reading this issue though? It brought out something that I think should be present in more comics. I recognize the drawback to having an all-male cast, but I also recognize the power in such a setting being doing right. There’s diversity of race, sexual orientation, and gender presentation among men that hits on something important for men of all make-ups.

The Backstagers is the comic you present to the young queer men and men of color in your life, and to yourself if you fit those and you happen to have a time machine. I seriously wonder if this comic could evoke the same experience and joy that we know from Lumberjanes, and in a way that affirms anyone who identifies as male in a world where we’re told that our emotions, our presence, and our feelings for other men must fit within restrictive and repressive boxes.