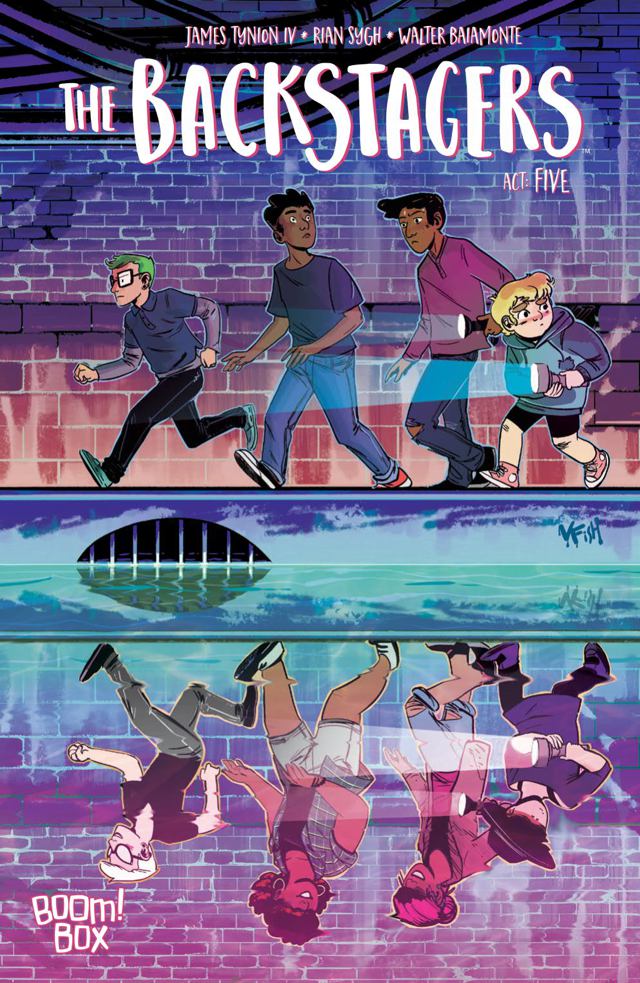 Canada? What is it even?

Les Terribles is over and the crew needs some down time. Aziz and Beckett recommend the ultra-intricate tradition of Total Conquest, and just as they are getting set up, something sounds from the deeper bowels of the Backstage. Beckett sees some familiar faces before Sasha sees another whose presence is maybe more menacing than either stage crew expected.

Mythology is one of the core parts of Backstagers and it’s great to see it expanded yet again. The Backstage is a mystery that seems like it will never fully be solved, but each member of the stage crew dives in with equal enthusiasm, wonder, and fear. The reality that the Backstage may be a nexus for all theaters is a really cool development because it opens the world in a way that could mean any number of encounters with people potentially across the globe. With an already wonderfully energetic and diverse cast, there could be any number of new arrivals in the future.

The parallels between the Penitent Angels’ Techies and the Backstagers are a delightful look into the characters we’ve seen thus far. Many of their mannerisms are astonishingly similar, and even the differences aren’t too far off. It’s easy to spot who’s supposed to be the analog of who. The Techies are also yet another example of Backstagers and its ability to have an incredible variety of people increasing rep for many groups that aren’t typically represented in comics. One of the biggest examples of the team and their dedication to diversity is Adrienne, who uses an assistive device for hearing. Her device is one small yet immensely important detail in the vibrant series and a wonderful display of the team’s dedication to making sure everyone gets to show up on the page.

James Tynion’s character work is superb. Utilizing such a grand mix of personalities and demeanors is no small task, but each of them mesh to create a multifaceted story that doesn’t diminish any of them. Even though the new arrivals show up in the latter half of the issue, they still feel as though they get ample and equal time among the series’ main characters. Tynion’s skill is well suited to this story because it thrives on differing personalities, and the same gradient we see physically is manifest expression and dialogue. Without missing a beat, both the characters and the plot move together with matching vivacity.

Rian Sygh’s best moments are in each character’s expressions. Many of them are so outrageous they steal scenes, panels, and entire pages. From Sasha’s paradoxically sinister expression to Beckett’s sarcasm and intelligence, these images make the story that much more delightful. Just as I enjoyed the Techie’s as narrative parallels to the characters, I admired Sygh’s visual parallels of each of them. While they correspond to specific characters, the Techie’s also take on a nice gradient of body sizes, types, and skin tones that helps to maintain the representative spirit of Backstagers.

Per usual, color is a world all its own in Backstagers #5. Moving from the normalcy of the St. Gensius stage to the enigmatic Backstage, the colors transform and move beyond realistic restrictions. Walter Baiamonte crafts their world in brightness, maturing the adventurous personalities of the main characters. In this issue, however, the last pages have a haunting and electric presence of color. The bright pinks create an eerie vibe in each scene, ending with an unsettling display of energy in the last page.

You never know what you’re going to get with each new issue of Backstagers, and the fifth provides ample changes to keep any reader interested. I love the liveliness of the characters and the small details that build up into this inclusive comic. If you have a penchant for mystery, fantasy, incredibly convoluted games of global conquest, and, most of all, a story that gives a voice and a face to marginalized characters, pick up this issue.