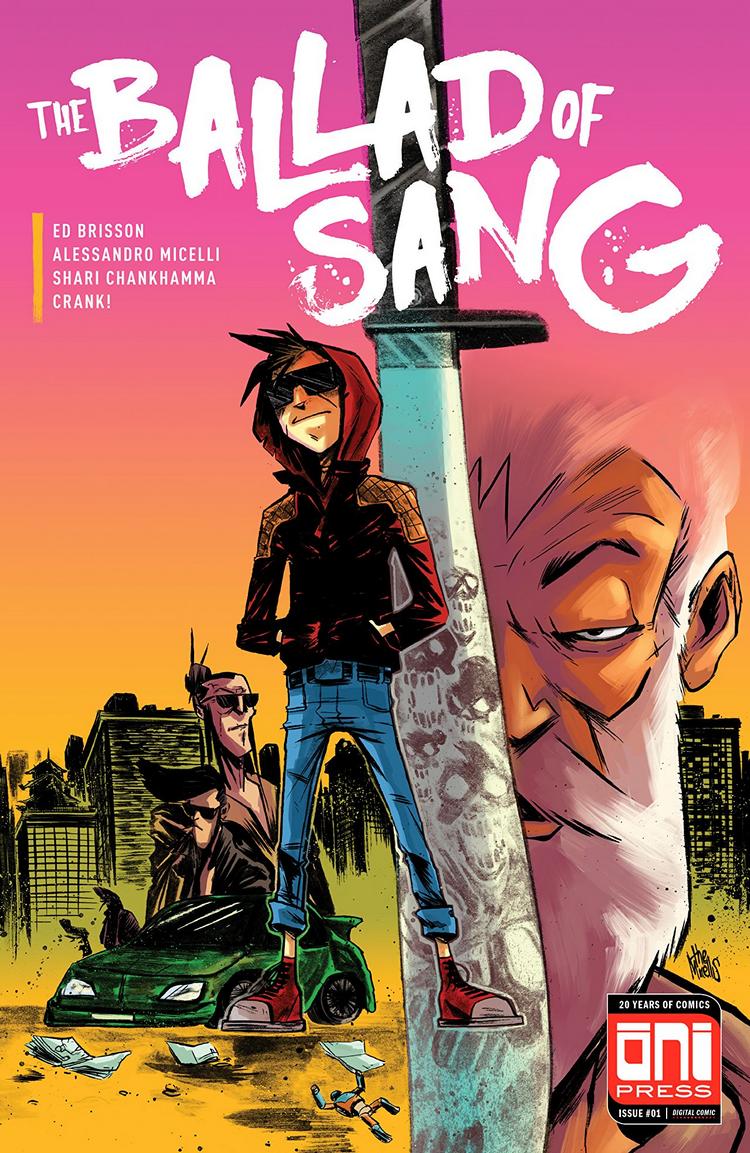 By my count, there are two cardinal sins an ultra-violent work can commit. One is to be visually uninteresting. The other is to have nothing to say. Individually, these sins can be forgiven if everything else falls into place— a shallow work that has breathtaking fight choreography is easy to forgive, as is a work with uninspired action but brilliant character work. But as Ed Brisson and Alessandro Micelli’s The Ballad of Sang #1 proves, it’s almost impossible to recover if you begin by fully committing both of these sins.

Following in the footsteps of so many ultra-violent works before it, the comic is the story of an absurdly talented (and mute) child assassin (the eponymous Sang) mentored by a grizzled veteran for unknown purposes. The eponymous lead character and the aforementioned absurd talents are introduced mid-assignment, with the issue opening on Sang cockily strutting into the HQ of yakuza boss Don Sato, striking down every single one of his henchmen before delivering a series of poorly written notes demanding Sato repay rival boss Don Minchella.

Typically, this introduction style serves as an opportunity to dazzle the audience with a preview of the thrilling battles to come. Instead, in this instance it shows that while Micelli and colorist Shari Chankhamma are well suited to the grime and noir of anonymous urban spaces, they’re less adept at action. Micelli draws characters that are as interchangeable as Streets of Rage sprites and the kill shots are just as unimaginative, chock full of the sliced mouths and severed limbs that are becoming such a staple of the post-Logan comics environment.

Chankhamma’s reliance on a color palette based on various shades of dirt also means nothing really pops in this comic except for visuals that ultimately don’t matter, like the green strobe lights in Sato’s club or the random shock of blue hair on an assassin who gets a phone call announcing the bounty on Sang. It’s immensely disappointing when the most vivid visual element of a comic is one of its variant covers (in this case Marley Zarcone’s variant, which provokes more interest in the story and the lead character than anything happening behind the cover). Sang seems designed for an over the top, visceral artist like Tradd Moore but Micelli is too often muted and understated, especially with Chankhamma’s colors, so the comic lacks power and vibrancy, like decaf mislabeled as a morning blend.

The Ballad of Sang doesn’t fare any better in the storytelling department, though, and that’s perhaps even more confounding because Brisson usually writes the kind of ultra-violent stories that serve as effective commentary on the cycles of violence without sacrificing entertainment value, such as the aptly named The Violent. Brisson’s script for The Ballad of Sang, however, has the flat rhythms and stilted dialogue of a rightfully forgotten exploitation flick. You could fill out a bingo card with all of the gangster beats it hits, particularly once Sang heads back to his mentor’s humble home to fill him in on the details of the hit and gets a monologue about honor and how things used to be better in the old days. Old dude even makes sure to tell Sang “Even if I’m not truly your father, I will treat you as though you are my own flesh and blood.” Bet you can’t guess what happens to him next.

At the end of the first issue, The Ballad of Sang indicates that this was all set up and the real story is what comes next, as Sang ends up on the run from Minchella, framed for a murder he doesn’t think he committed. But there’s nothing to engage or hook readers enough to make them tune in for Sang’s escape, not when we’re living in what’s arguably a golden age for ultra-violent stories about criminals hunting each other down. This is one ballad you should feel free to tune out.