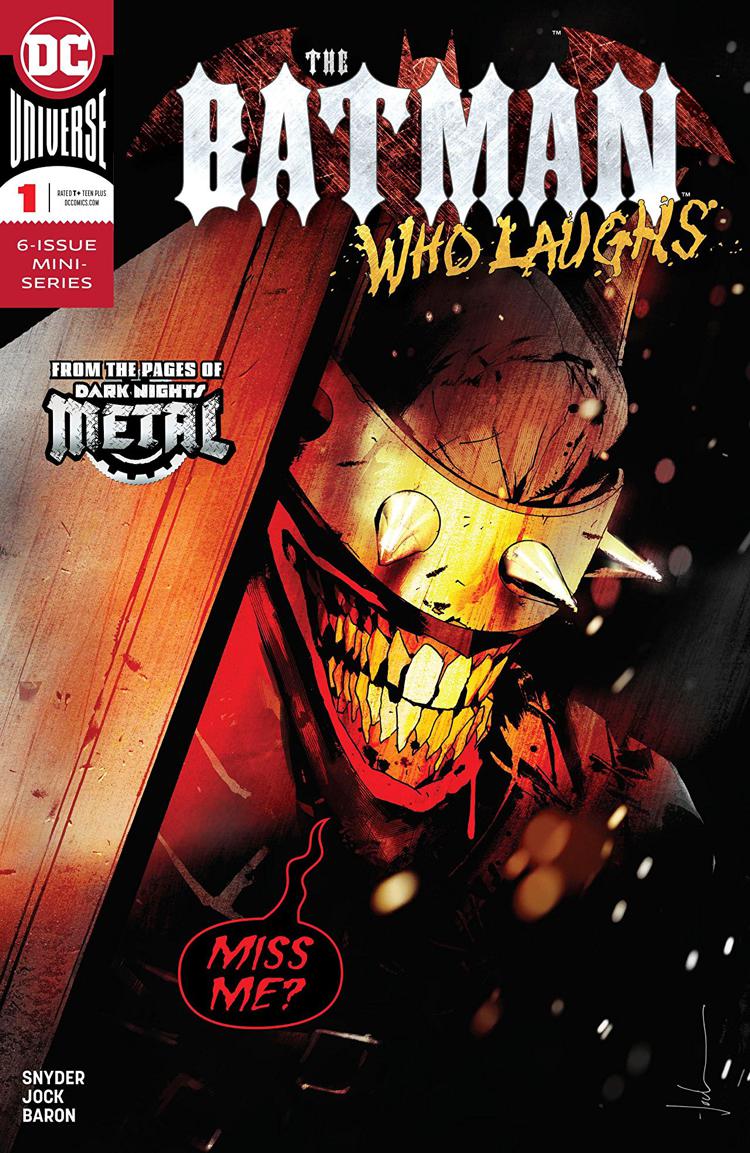 The opening act to Snyder and Jock’s glimpse into the Batman Who Laughs character is, to be blunt, a bit of a misfire. While this comic is worth a read, I am going to say this might be a book to keep an eye on as issues come out and then, around Issue 3, make a choice to get caught up on back issues and then stick with it to the end. Otherwise, this may well be a book better digested as a Trade Paperback. I am not normally one to make this kind of a statement, but let me be clear as to why: some things in this story may or may not jive with what various readers ‘see’ Batman as, particularly where his relationship with Joker is involved.

Ever since the return of Jason Todd, I have been aware of two camps of Bat-fan. The first are those who think Batman would, for obvious reasons, mentally think about killing Joker, even if he never acts on those thoughts. The second camp are those who think Batman wouldn’t have that kind of relationship with Joker, i.e.: wishing him dead but not acting on it, regardless of anything Joker has ever or will ever do. Snyder takes a particularly weird middle-road with this mini, that being he has thought about killing Joker, but not for reasons to do with his moral code explicitly. I emphasize the word “explicitly” because, while Snyder may well be holding true to valuing Bruce’s views on murder, his rationale for not killing Joker in this mini come down to the issue that there is something dangerous about actually killing Joker in a physical sense. This is something touched on in Batman’s mythos before, but suffice to say the position Bruce has here is a big part of what makes the comic tick. Take this for what you will, but there are clear positions Snyder establishes for 1) what Bruce thinks about Joker privately and 2) he has a particular reason for not wanting Joker dead which are in addition to any normally canon rules Batman follows, i.e.: no guns, no killing, etc…

This is all to say, there is some wild stuff in this comic that I am not sure about and I am not sure how to address it without explicit spoilers, but … here I go. An iconic character is seemingly killed on a page by an alternate Batman (not Batman Who Laughs) who uses a flamethrower. There is no reason for this character to survive said attack, especially when you know who this character is. I know comics have a rule about “no body, no death,” but this stretches my limits because of how the sequence is handled. Basically, [spoiler!]’s character is lit up like a Christmas tree, complete with ominously horrified screaming and poignant comments about being on fire, and then we never see this character again. There is then an off-hand comment about this character having been “almost killed.” I am not sure if my lore on this character is up to snuff, but my guess is this was a sequence to include shock for shock’s sake. I was, in fact, stunned when I first read this sequence in full. The loss of it’s impact, in a way, sort of highlighted what is probably going to be the toughest thing about this book that is true for many comics, but perhaps it bears repeating here:

Stakes are going to be nigh impossible to pull off because of “what” characters like Batman and Joker are. Neither can die or suffer lasting impact, thus the burden of the writer is to tell a good story while the audience knows nothing will actually change. Plenty of great comics can (and, do) happen where no major character dies, right? This is certainly possible with this comic, but because Joker plays such a massive role at the heart of it, and considering how this comic ends on Issue #1 … I don’t know.

This is probably the hardest review I have ever done because on one hand, look: it’s Snyder and that, for me at least, entails a certain level of quality. That quality is here, but it’s burdened by a narrative that is almost forcing readers to acknowledge the permeance of characters even while they’re being lit on fire or shot in the heart. It’s a lot to ask for, and comics with Joker as a focus are always hard sells.

So, again: keep an eye out for this series because there is a lot of interesting ideas being brought in, but also be honest about what you want from a Batman/Joker story. Speaking for myself, this isn’t the kind of story I think I want to read, but that doesn’t mean you shouldn’t give it a shot with Issue #1, keep tabs on it, and ultimately consider checking it out as a TPB later on. Pick your poison, if you will.

Jock’s art is going to run the range of excellent to poor, some of this having to do with the colors and posing of characters. For example, much of this comic is taken up by an action sequence involving Batman and a portable house (yes, you read that right). In these sequences, with lots of tremendous action and explosions, Jock’s sort of jagged/sharp angles seem great and it fits the flow of the panels. In other places, particularly with close-ups and panel sequences where characters are handled head on, the art comes off as rushes because the colors are very broad. Joker, for example, comes across as a little unreadable because his white color scheme has little definition from certain angles, where in others they pop because of the red used around his eyes. I am not implying every artist and color team can strike the right balance on every page, but the later pages feel worse for ware than the first half of the story. However harsh I may sound, let me say this at least: Jock’s version of The Batman Who Laughs is gross and chilling enough to be worth the issue, should you be a Jock fan in particular. He brings a tangible sharpness to the character that oozes dread and agony, so it is a pity the character really isn’t in this issue at all.