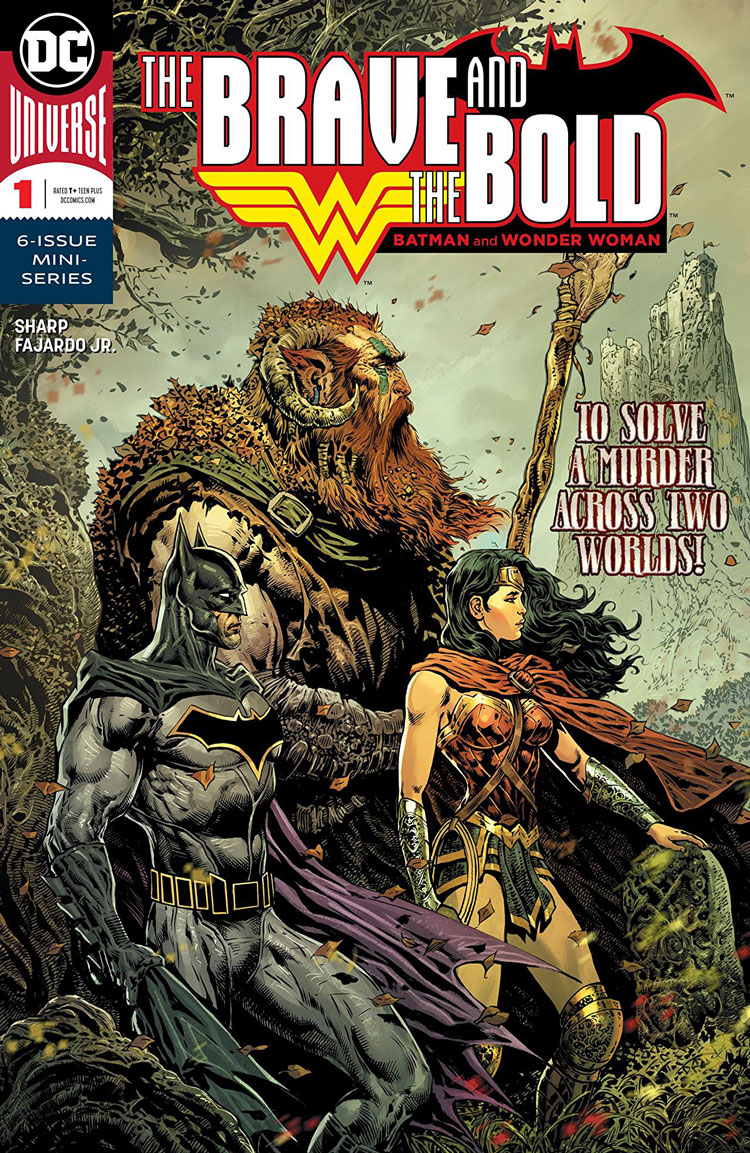 Where Bruce admits he was wrong.

Strange and mystical occurrences are manifesting, and one of our heroes is accustomed to them while the other is left aghast. In Tir na nOg, things are not as they should be, and Diana accompanies Cernunnos to remedy the situation, while Bruce faces something far different than what he expected.

Bruce and Diana represent dualities in meaning and representation in this story. Diana is vastly familiar with the everyday lives of gods and Bruce is someone who works to remain grounded in everything he does. This dynamic is shown not just through the story but through the images that serve as another layer to it.

Whenever Diana is present, everything feels structured, embedded within imagery belonging to deities and myth. With Bruce, however, we see often distorted images, particularly in the last pages. They may be in separate locales at the moment, but I am excited to see how these separate themes will blend together over the course of this mini-series.

Liam Sharp employs interesting effects when writing both of the main characters. With Diana, a god asking her for help feels ordinary, as though someone teleporting while you’re in a tryst is no unexpected thing. Bruce seems to embody a disbelief, the idea that if it is not firmly enmeshed within logic and reality that it must not be real, so his incredulity at the end of the issue is a nice nod to what will come after.

I like that Sharp gets Diana’s sense of duty and reverence, marking her as someone who recognizes the importance of Cernunnos’ request. I also like a sensitive and emotive Bruce, and Sharp does well in portraying him as someone who is uncertain and who is feeling.

Sharp is behind the brush on this issue, too, and one of this comic’s best effects is that it feels like an epic. Drawing upon images and symbols from Irish mythology cements this story within a world that almost feels more fantastical than that of super-heroics. I love how Sharp renders every environment because they all have a sense of mysticism attached to them, one which I feel is going to be integral to the larger story.

One area of contention I have with the visuals is Diana represented by softness and the fact that she is clotheless for at least half of her appearances. There’s a couple of ways to interpret this: for one, there’s the interplay of demure femininity and rough masculinity, which you can see in every character through the story; for two, I think this visage for Diana can represent the ease at which she accepts that something otherworldly is going on; for three, it does still fit within the common use of women in comics as sexual props.

It feels as though Sharp was intentional with how characters are portrayed, but I do see a mixed message in how Diana is shown. An obvious comparison is the fact that Bruce initially shows up as shirtless, too, but his representation isn’t grounded in a framework of sex and shirtless men do not hold the same messages as naked women in most media.

Romulo Fajardo Jr.’s colors evoke a darkness that works within this narrative and that, like the rest of the story, puts Diana at odds with her environment. Diana’s bright red is a major contrast to the detritus of Tir na nOg. Compare this to Bruce, who ironically blends into his setting at every step even though things apparently do not make sense to him. Fajardo Jr. imbues a shadowy atmostphere in every page that walks in step with the story, even the scenes where things seem bright and airy.

The Brave and the Bold, at this point, feels like a story that involves building from destruction, and Fajardo Jr.’s talents are well suited to this tone.

I’m a sucker for Brave and the Bold stories because they so often involve the melding of different worlds. Bringing the magical aspects of Diana’s world into Bruce’s is a great jumping off point for challenging his perception of reality while elucidating hers. There may be some imagery that feels off for this inaugural issue, yet I’m willing to trust this creative team in crafting a tale that is deliberate at all levels. I’m ready to see what comes next and I think the level of intrigue in this issue is enough to warrant curiosity for the next.