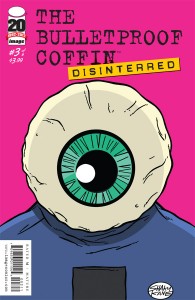 Bulletproof Coffin is a trip through the sordid underbelly of a depraved society. A beat poet film-noir. With every page turn, I expect to see Stan and Jack sitting in a bar, ingesting who knows what, weaving tales that lapse into the occasional moment of sanity. But this story is all Hine, a sometimes superhero story that is more Burroughs (William S.) then Batman. A twisted Toy Story where the hero of the piece seems more likely to destroy the world than the villain. The writing is ideal for every scenario, speaking to any one of numerous personalities.

The art by Kane is abstract enough to be effective, and detailed enough to be disturbing. On first look, you aren’t sure if it is meant to be serious, or a demented take on a classic look. If one can possibly do both, then this is one more area where the book succeeds.

This is a book where the anticipation itself is a drug mainlined through your eyes and directly into your brain. Every time that I sense it going down a path that feels familiar, it soon after detours into an unexpected train-wreck of consequences. Most comics of this ilk are satisfied rehashing that which has come before purely as homage, Bulletproof Coffin purees its references into a fresh new take on a comic style we have all loved at one time or another. The only reason that I am not giving this book a perfect review, is the fact that there are still 3 more issues to go, and I want it completed right now.