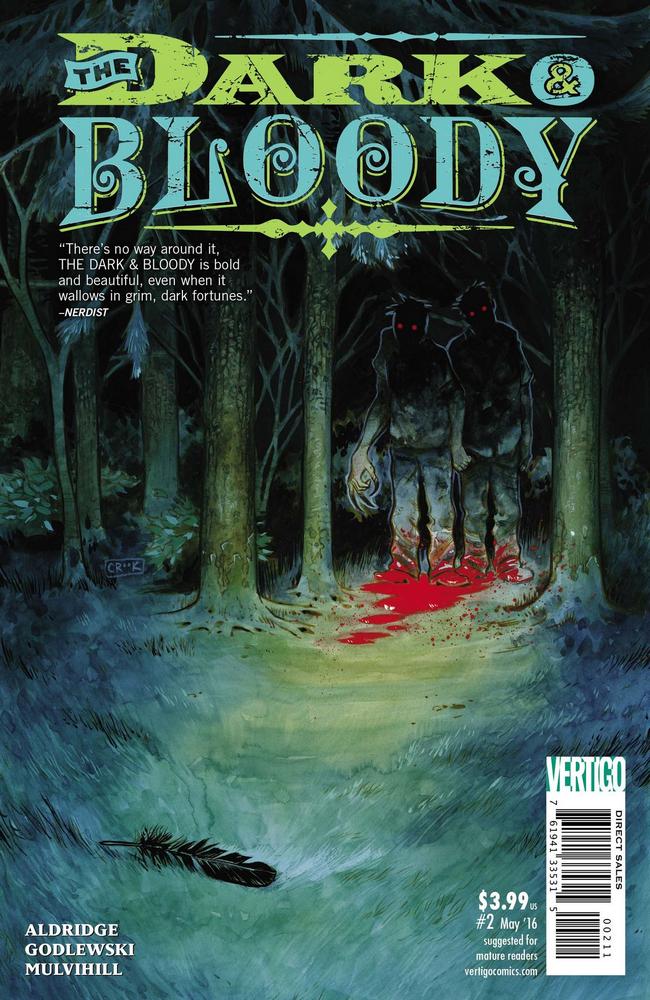 Well. To say that The Dark & Bloody has knocked me off my feet again would be an understatement. I’ve been anxiously awaiting issue two to hit the stands since the debut issue from writer Shawn Aldridge and artist Scott Godlewski came out last month. And here it is, and here I lay, typing this review from six feet under because this book absolutely slayed me.

The Dark & Bloody #2 does everything right, leaving no stone unturned. Every creepy moment is terror achieved, every emotional scene leaves you raw. In the first issue, we were introduced to Iris Gentry, his past demons, his current predicament, and the shadowy evil lurking in the woods. In this issue, we dig a bit deeper into Iris’ former life as an Armed Forces soldier, and we start to see hie life unravel with the more forward appearance of the dark things that go bump in the night. This issue ends with some serious familial repercussions for Iris, and a whole lot of questions that leaves me wanting issue three as soon as possible.

One thing I’ve really enjoyed about this series is that the creators have jumped in with both feet, full speed ahead. Right from the get-go the plot has been charging down a powerful path. This issue is no different, moving the plot forward with some interesting supernatural-horror high points that are as intriguing as they are genuinely creepy. This is a comic perfect for horror fans, but also for those that like a deep and emotional portrayal of less-than suburban living, much akin to Southern Bastards and The Violent. This issue tugs deep at your heartstrings all while causing your heart to hammer in fear.

Scott Godlewski is an incredible artist, and this issue really showcases his talent. His work on Copperhead proved just how much of an effective storyteller he is, one of the best at facial expressions and emotive scenes I can think of. His work on The Dark & Bloody echoes the talent of his previous work, but is also different, wonderfully fitting the tone of this book. His work is certainly darker; the wonderful colors by Patricia Mulvihill work magic in this issue. The team certainly works well together to produce a shadowy style that shines in all the right places. Godlewski’s art goes a long way in making Iris a sympathetic character, projecting his emotional turmoil seamlessly on every page. So much of this story can be progressed through art alone, something that not every artist can achieve so cleanly.

However, that is not to say anything negative about Aldridge’s writing. This story is completely engrossing, from cover to cover. The dialogue progresses the story, the narration pulling you deeper into Iris’ world with every panel. The characters are allowed depth, and each relationship enjoys sufficient exploration in this issue. I’ve enjoyed this series because of its layers upon layers that are already unwinding beautifully, and I’m looking forward to digging into the intricacies of this plot as the story progresses. My only real gripe about this issue is that not all scenes are understandable (yet, at least), but that’s not even close to a deal-breaker here.

Aldridge and Godlewski have created something unimaginably powerful in this story. The Dark & Bloody is without a doubt one of the best stories to come out of Vertigo’s new line-up, and I know it’s one I’ll read to the end. The Dark & Bloody offers a visceral and emotionally powerful take on the horror genre. There’s not a thing about this book that’s anything less than enjoyable.