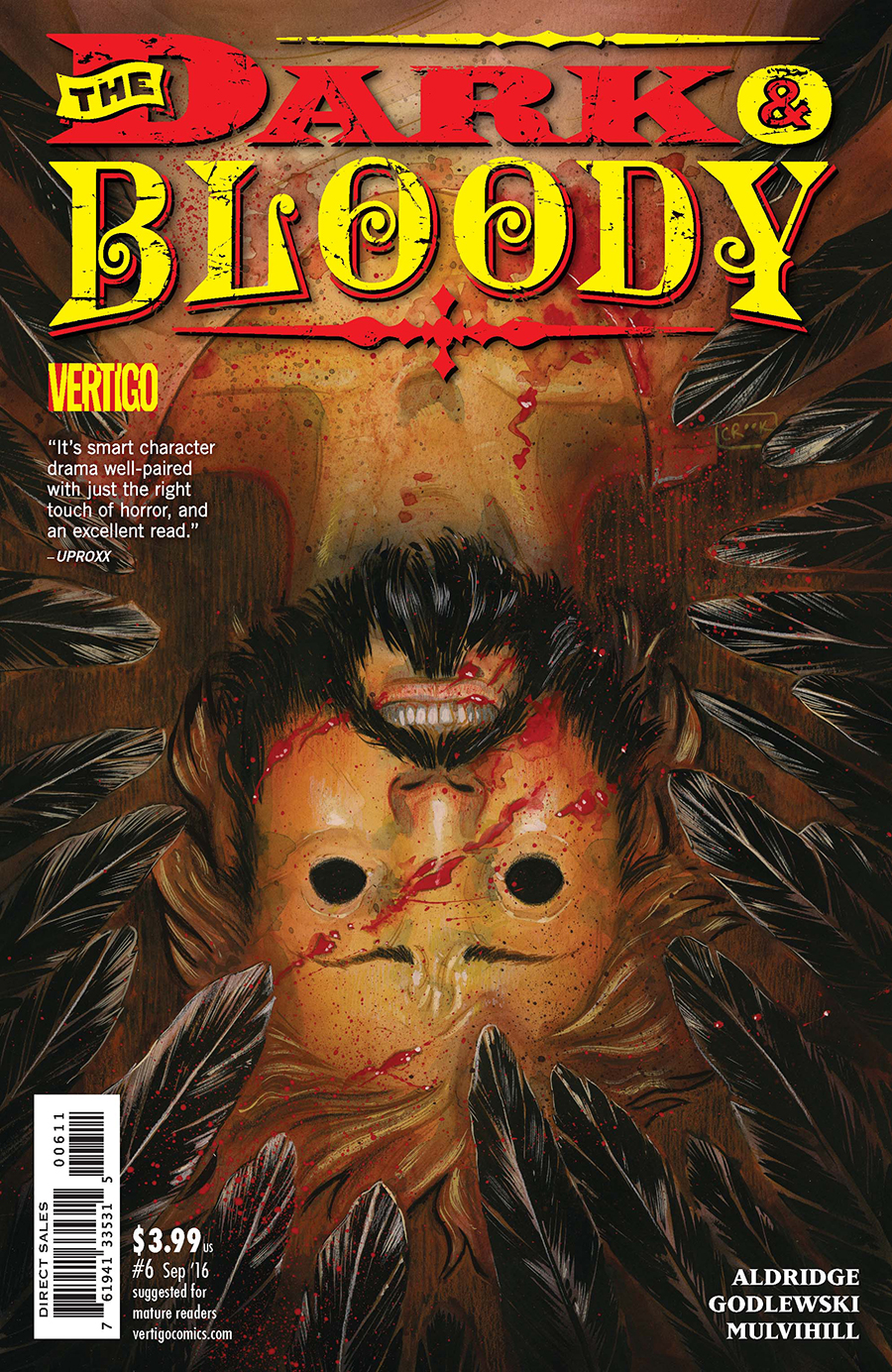 At long last, Shawn Aldridge’s story of pain and loss that starts in Iraq and ends in Kentucky comes to a close. While Iris ushered up a bloody final panel at the end of issue #5, the ramifications of that previous event, as well as numerous others, get left behind as Aldridge’s story closes out with a neat bow on top.

Fortunately, there is enough positives at the end of the story to outweigh the cons, yet there may well be readers who find the closing unsatisfactory. Ultimately, this may be the point Aldridge desires to make — that the circle of violence and cause/effect is never truly done with (and there are panels which provide such views). If there are those who come to the final pages of issue #5, they are at the very least in for a good time as issue #6 of The Dark and Bloody is … well … plenty dark and bloody.

Perhaps the greatest strength of issue #6 is that, at last, all the cards are on the table. What is it that the entity within Ayah desires? How will Iris’ “payment” matter in the end? Will the magical possum critter come to anyone’s rescue again? The five previous issues worth of build-up pay off when Iris confronts the demon, and this payoff is fantastic due to Godlewski’s monster designs and panel layouts.

The transitions between violence panels moves smoothly, allowing readers to follow any and all action without fuss. The presentation of the demonic entity within Ayah remains as striking and as gruesome as when it first appeared, but now the stakes of its violence are higher than ever. The coloring deserves mentioning since the contrasts between the blood-red world of the forest and the colorful, vibrant domain of limbo in which Ayah and Iris visit work well to show how terror can exist in many, many vibrant tones. The panel and design work of Godlewski and the coloring of Patricia Mulvihill make the pages sing together wonderfully.

Aldridge handles drama well as he believably crafts a conclusion to a story that, in some parts, was rushed. The focus remains on Iris and his desire to atone for his past actions, to save his son and family, and to make it to see his next sunrise. The character drama between Iris and Ayah towards the end, a sequence which stands out as one of the best, unfortunately highlights some of the flaws.

Yes, Iris and Ayah have a spectacularly written sequence together … yet it raises questions, specifically questions regarding the nature and background of the bird-like entity and its ties with Ayah’s family. These questions, as mentioned before, dangle, teasingly-so. They tease because they are indeed interesting. Aldridge builds a story with weight and tension, so it is understandable that some readers may well want to know more (I know that I did!), yet if this is the worst criticism than you should consider The Dark and Bloody #6 a success.

The resolution of Iris’ actions from the issue #5 could have resulted in something more than what it winds up yielding, yet I doubt many people will consider the end-game conflict a poor one. I would have loved to know more about so many characters, yet no character remained weakened by their omission of details. I would have perhaps loved more background on Elijah and his possum companion, but alas, perhaps they can have their own comic someday.

In the end, The Dark and Bloody has as much to say about responsibility, compassion, and family bonds as it does about grief, violence, and fear. Aldridge and Godlewski have poured their talents into a good collaborative effort which yields up a bounty of monstrously good art, a moving story, and a satisfying ending, despite some characters being left behind here and there.