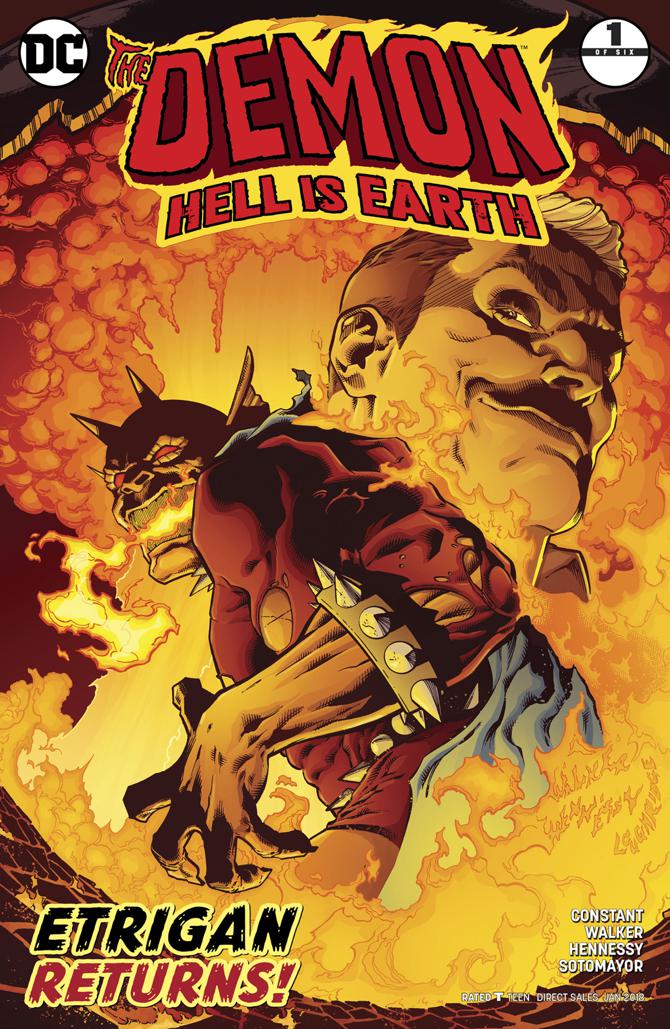 If there’s one thing DC Comics has done right this year, that would be celebrating the contributions of Jack Kirby. But let’s be honest, they’ve done quite a bit more than that right this year. That said, they have really done a fantastic job of revisiting (and in some cases refreshing the core concepts and explosive imagination) of Kirby’s Kreations. Naturally, The Demon: Hell is Earth #1 puts another of those creations in the spotlight.

The opening chapter of a miniseries written by Andrew Constant, drawn by Brad Walker (check out the interview with both here), inked by Andrew Hennessy, colored by Chris Sotomayor, and lettered by Tom Napolitano, The Demon: Hell is Earth #1 introduces readers to Jason Blood, his timesharing demon, Etrigan, and a situation set to bring out the best (worst?) in each of them. Blood is starting to feel his leash on Etrigan slipping away, so he takes some desperate measures, which we all know makes for better drama.

This doesn’t discard anything, nor does it prop itself up on anything. Constant takes Etrigan, gives him a proper dusting off, and then looks at the pieces of Etrigan’s life (and Blood’s) and around his immediate sphere of influence that make sense to keep around. There’s a pinch of humor, a sizeable chunk of darkness, and a whole bunch of potential.

Constant writes Blood as a defeated man, on his last gasp, trying so very hard to keep his (literal) demons in check. Twenty pages of that would be taxing, but Constant intersperses scenes with a plot device family and an old ally of Blood and Etrigan. The change-ups keep the book moving nicely and offer just enough reprieve to ratchet up concern for Blood. Constant’s pacing is smart, his dialog theatrical, but appropriate, and his plot twisted just enough to be a fresh take on a familiar idea.

To say Walker does a good job drawing all that would be as much of an understatement as my earlier assessment of DC’s creative output. Walker doesn’t just draw it all and make it sharp and snazzy, he owns it, co-signing Kirby’s designs with enough of their original intent to homage the legendary creator, while still defining his own take on things, like Etrigan’s footwear and fingernails/claws. Etrigan and Jason Blood share more panels than I expected, and Walker does a stunning job illustrating the size difference between the two. I’d buy a Walker-drawn comic of those two jawing at each other.

The “ordinary” family filling out the cast of The Demon: Hell is Earth #1 is brilliantly plain, which makes their role in the story even more enveloping. A strong, detailed artist like Walker requires honest, loyal inking, which is exactly what Hennessy delivers. Any Etrigan story is going to have shadows – metaphorical and literal – and Hennessy sublimely presents all of the shady parts of this comic book’s soul in equal, deep measure.

Sotomayor’s colors are intense and brilliant, equally worthy of Kirby’s art as Walker’s. The colorist locks every scene into existence, bringing just as much theatrical lighting to the affairs in The Demon: Hell is Earth #1 as the story requires. And then a little bit more. Sotomayor isn’t afraid of Etrigan’s red top disappearing into flames, and easily presents an educational range of warm tones throughout the issue.

As much of the issue is dialog between Blood and Etrigan, much of the lettering must define their discussion. Etrigan spends a great deal of the story off-panel, but Napolitano provides the perfect match between word balloon and caption box to define Etrigan’s speech throughout the story. When a third, demonic party enters The Demon: Hell is Earth #1, Napolitano brings another style to that party’s dialog, and it all stays within the confines of this comic. Walker dances through the page construction of the story, and Napolitano proves to be a wonderful match, hitting each step in the story without compromising the art underneath.

My only gripe with The Demon: Hell is Earth #1 is that this really should have had a double-sized debut, as this issue moves so quickly while packing in so much. That’s not bad, mind you, especially in an era of trade-waiting, but I definitely closed the back cover of The Demon: Hell is Earth #1 wanting more, despite my satisfaction with the story.