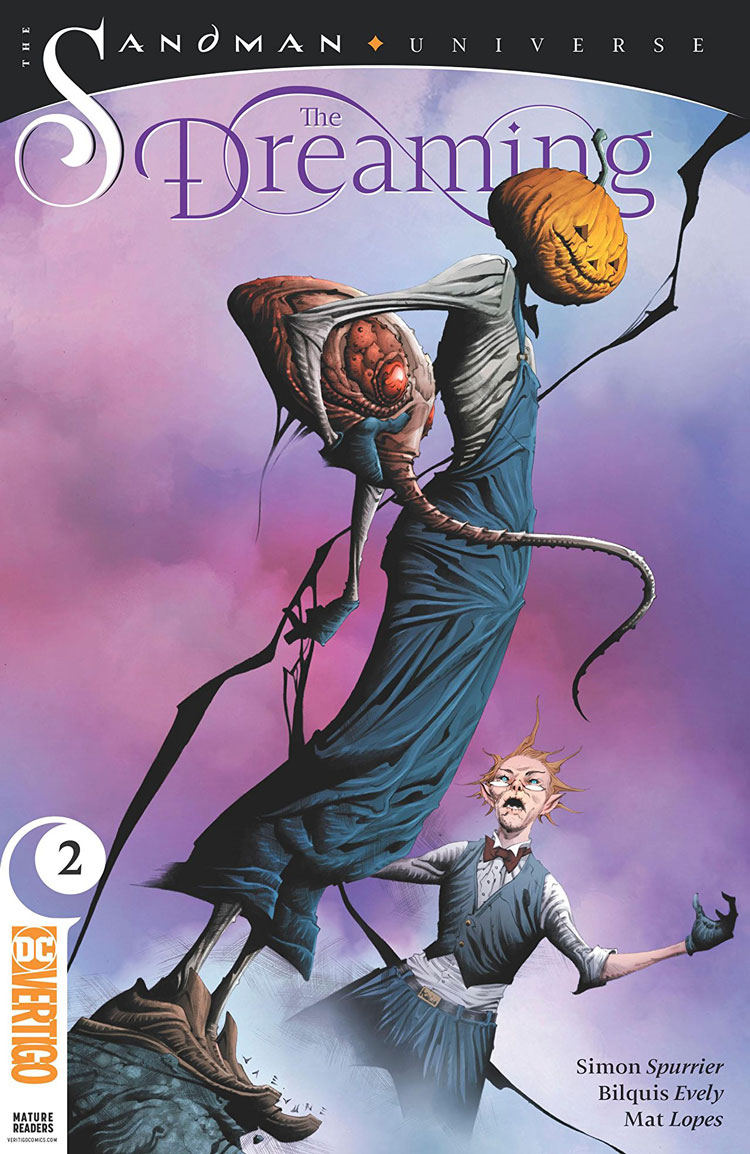 Merv spins a tale of the degradation of the Dreaming. For him, the world is chaos, and that’s saying something. Dealing with the presence of Dora, the loss of his crew, and the clandestine actions of Lucien is all a bit much for him, leaving Merv to make a choice that could be catastrophic.

The Dreaming continues to be a comic that is wildly imaginative. No lie, it’s a dense read, but there are some important themes that arise from it. What would you do if everything you knew was continually broken down, leaving your understanding shattered? Each of the characters is working to figure out how to deal with the loss of their lord and the subsequent confusion, and I think you can draw a lot of meaning from them and their narratives.

Simon Spurrier has created a story about loss and grief in this second issue of The Dreaming. Merv as a focal point is interesting because in some ways he mirrors a lot of conservative thinking, at least from an American perspective. His focus on meritocracy and hatred of outsiders is a cover for her deep sense of loss (though this is not to say that such ideas are justified in the world of the Dreaming or our actual reality). Spurrier creates an excellent build-up to reveal this truth about this issue’s protagonist, which makes his decision in the end that much more provocative.

Bilquis Evely makes this issue more wild than the last, which I find incredible. There’s a lot of shifting throughout the story, whether it’s literally through Dora changing her shape or just the nature of the environment itself. Evely is able to portray a world made of all the things our mind can conceive and more, helping readers see just how outrageous the setting is for this comic.

One of my favorite parts of this story is the blocks that appear when Merv visits Cain and Abel. They are striking considering they are one of the few solid and organized structures, and they help you see the distinction between order and the chaos that exists everywhere else in the story.

Mat Lopes on colors moves us through a wide range of feelings and atmospheres. As the color schemes for various scenes change, Lopes evokes new emotions. In general, the colors feel more muted in this issue, and I think that works with the story that Merv weaves and how his story is revealed to have come from a place of hurt.

There’s so much to unpack in The Dreaming and this second issue cements that idea. The characters are all strange and diverse, and they exist in a world where really anything can happen. Yet, one of the major themes emerging from this story is the fact that many people can experience pain in different ways, and no matter how fantastic their world, they can experience the same complex emotions we do.