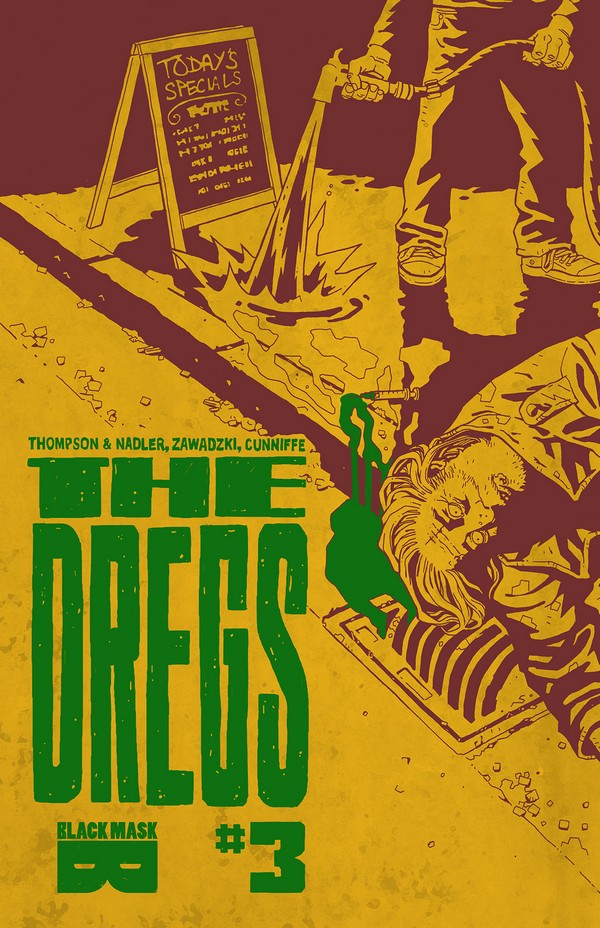 Fictional detective Philip Marlowe once observed that dead men are heavier than broken hearts. In The Dregs #3 derelict Arnold doesn’t know if his friend Manny is dead but his disappearance weighs heavily on his drug addicted mind. In this issue the reader continues to follow his investigation as he retraces Manny’s steps and comes closer to an answer. Though the truth is becoming clearer it is unclear if Arnold’s mind is.

The Dregs is a comic book that could be very easily dismissed as just another book using shocking imagery to wow readers. Once you start reading it, however, you discover that it is so much more. The series was written as a deeper look at the homeless community of Vancouver British Colombia Canada, but there is a deeper message here as well. The foundational theme is a story about the human quest to uncover the truth of one’s reality when it is buried deep within the trappings of the world. Creators Nadler and Thompson use Arnold’s experiences and musings to show the reader that truth can be hidden under addiction, lifestyle, or marketing.  They have impregnated the pages with symbolism and references to literary characters like Philip Marlowe, Don Quixote, and Sisyphus as it takes us through Arnold’s own personal journey. They send the reader along with Arnold and experience the world as if lodged in his skull and looking out of his eye sockets. They continue to demonstrate that he is not a bumbling fool but a smart man that has had his brain fogged by drugs, loneliness and failure. The literary references point to him being a modern day knight and possibly the only good character in the story. He is willing to give up personal comfort for the truth. Even his use of drugs is made more palatable by his reluctance to take them and when he does it’s only to clear his head so he can continue his search.  The writers effectively immerse us in his feelings and we find ourselves getting wrapped up in experiences of withdrawal, confusion, or even being drenched in cold rain.

As mentioned before Nadler and Thompson have infused the book with lots of symbolism. Throughout the series and in this issue especially we see allusions to Arnold being a Don Quixote type figure. There are many references to windmills or the basic shape of a windmill and of course there is the restaurant whose name recalls the famous Man of La Mancha. Though in Cervantes famous book the main character is chasing after imaginary monsters here Arnold is chasing after monsters that are all too real. In this issue Nadler and Thompson do a great job of showing how Arnold’s view of reality and the real world is merging. We see outfits, cars and some people that appear to be straight out of a Marlowe mystery mixed in with modern day counterparts. Even Arnold himself begins to lose himself in the role of Marlowe as he starts to put the pieces together. Nadler and Thompson’s experience as filmmakers show through in the visual way the book communicates truth to the reader through action words, and vivid description of smells.

Without Zawadzki’s talent on this book the message would be lost. He has done a masterful job at painting the picture of Nadler and Thompson’s ideas and giving them life on the page. It is obvious that every single page has been deliberately laid out with much forethought. He immerses us convincingly into the confusion that is Arnold’s mind. One page in particular communicates this disorientation through mixed up pieces of his face across a nine panel spread. Another time we find Arnold immersed in a sea of dialogue that to him it’s just useless information that drones on and on. Something interesting to look for is the intentional change in rendering of the panel borders. Sometimes they are drawn carefully and straight while other times they are free handed and wobbly. It seems to be Zawadzki’s way of communicating to the reader when Arnold is experiencing life on a drug high and when he is not. Shadows are almost another character in this book as they envelop most of the story both literally and figuratively. The inking is used perfectly to drape each scene in these profound shadows. In this issue we are beginning to see a number of transformations both in Arnold and in his surroundings.

The world around him is becoming cleaner and more organized and in Arnold’s mind we find him taking on a Marlowe persona. The reader may ask, though, are things becoming more convoluted as he comes closer to the truth?  Dee Cunniffe’s colors are outstanding and cover the page with hues that have a dirty look to them. A watercolor wash communicates a dirty patina that seems to cover everything. Interesting to note is that there is a page that is completely free of this dirty coating both on Arnold and the character he is talking to. There are some outstanding examples color in a couple of  panels particular in this issue. Arnold takes a ride in a police car and as he looks out the window we see the colors of the lights around him reflected on the glass. Beautiful.

If you are not reading this book you should be. The story is immersive and the art is some of the best of the year. Read and then reread and take a step back and let it all sink in. There is so much more here than just another comic book. There is truth to be revealed in the story and in a deeper meaning of the book as a whole. Take the time to investigate it just as Arnold is; just don’t let yourself get fooled by what is on the surface.