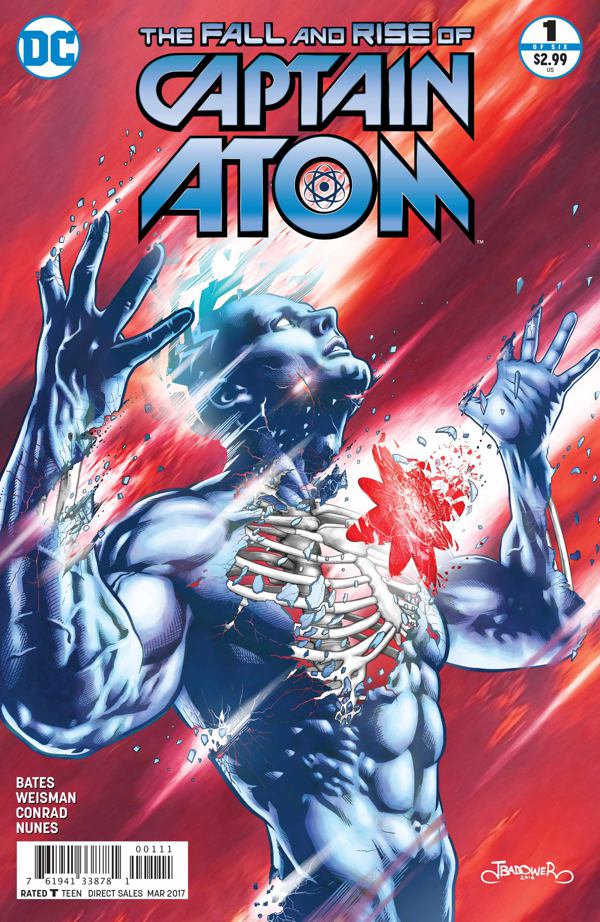 Full disclosure: I truly enjoyed Captain Atom’s post-Crisis on Infinite Earths origin and series. On the flipside of that, the New 52 adjustment of the quantum-fueled Nathaniel Adam fiercely disappointed me.

As with most things Rebirth, DC has decided to examine the winning formula. For Captain Atom, they need to look no farther than the writer who launched Captain Atom #1 in 1987: Cary Bates. To add incentive, however, DC also brings in fan favorite writer (of both comics and television): Greg Weisman. Together the duo crafts the tale of The Fall and Rise of Captain Atom.

Titled “Blowback”, The Fall and Rise of Captain Atom #1 opens with the good Captain alone in a laboratory setting (labeled “The Continuum” via caption box) before checking in to a control room where readers meet Doctor Megala and General Eiling. The latter duo is trying to bolster Atom’s confidence and apprise the nuclear hero of his current situation.

Through this opening scene, Bates and Weisman have the readers by hand, providing personal introductions to the cast and a tour of Captain Atom’s world. The mystery at the core of The Fall and Rise of Captain Atom is one we share with Atom – we know as much as he does, and vice versa. Why is he in that room? What is he so worried about? And thus, one of the most powerful characters in the DC Universe becomes truly human, and Bates and Weisman make the readers participants.

The way I see it, there are two very slight missteps in the story: locking this series into a date, both through a reference to 2013 as well as the date on the final page of The Fall and Rise of Captain Atom #1. Easy to overlook and accept, but in a few years that could be as dated as Tony Stark’s visit to Vietnam. The other point where The Fall and Rise of Captain Atom wobbles for me is that the banter between Captain Atom and Doctor Megala feels like a Firestorm/Ronnie Raymond/Jason Rusch and Professor Martin Stein conversation. Megala needs a pinch more manipulative Niles Caulder to distance himself from the comparison, but this is only the first chapter in a new series. There’s plenty of time left for these two characters to grow. Slight missteps. Nits I have now picked for you to ignore during your own read.

On the art side of this comic, there could not have been a better choice than Will Conrad. He excels at detail, like a modern day Bruno Premiani. The detail enhances the story, but envelops the reader. The limited cast helps Conrad fully define each character so that when three members of the Justice League join the adventure midway through the issue. Colorist Ivan Nunes turns in career-best work, employing a very unstable, but appealing color palette. Letterer Saida Temofonte carries that through the dialog and set notes, using the sharp color choices, that include Columbia blue text on the burgundy caption boxes to balance a range of word balloon styles indicative of different communication devices.

Overall, The Fall and Rise of Captain Atom #1 is a pleasant surprise. Like so many of the more enjoyable Rebirth stories, this is a throwback to what made the character great: mysterious adventure tinged with uncertain comic book science and pending doom. Oh, and great character beats to succinctly define the players in the adventure without Bates and Weisman having to build soliloquies or villainous monologs into the plot. I’m not going to declare this entire run a complete victory yet, but this sure is a bombastic, fun start.