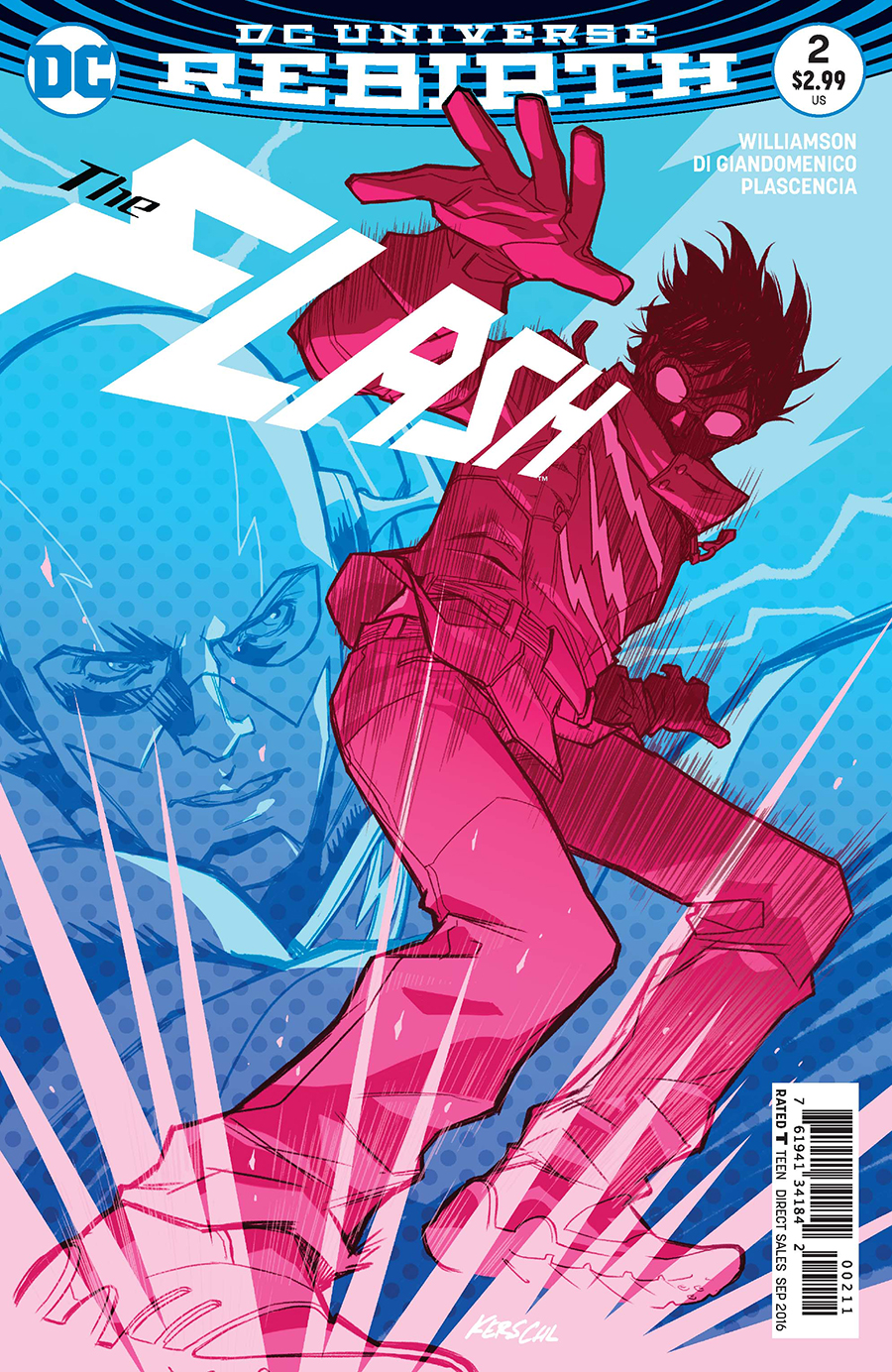 Barry is helping his friend August adjust to being one with the Speed Force, teaching him all the things he had to learn on his own. The two friends clash over ideals as Iris finds herself in danger, and later rescued by the two speedsters. Before everyone can rejoice for too long, a familiar storm looms over Central City, sparking a new development sure to change Barry and August’s life.

Rebirth is truly shaping up to be a wonderful rebranding and Barry is definitely a part of that. The developments within The Flash #2 are awesome and they look to change dynamics between characters, especially with the significant changes in the last pages of the issue. Here, we have a Barry who sticks to his morals, characters who conflict with him, AND an appearance of Wally. This issue captures the hope and resolve of Barry, while presenting challenging narratives.

Josh Williamson obviously has a good grasp of Barry, who is written to embody a resolute sense of justice. I like this Barry because he acts through his values and does not move from them. August also has a strong sense of justice, but his comes from facing the tragedy of losing his brother to violence on the job. These two personalities mix to provide an intriguing story that challenges the conception of what is just and how to pursue it. What I hope is that this important dynamic continues to play out through this first arc and that it leads to meaningful consequences and changes in each of the characters.

Carmine Di Giadomenico’s skills are well suited to convey movement and activity. Many of the characters’ clothes look like they actually live in them, and there is some kind of movement in each panel. These effects deftly portray the world of the Fastest Man Alive and I appreciate that the artistic choices mirror some of the themes of Barry’s life as the Flash. In contrast, the backgrounds are structured, polished, and incredibly detailed in each setting. I like that much of the artistic focus is on the characters, but that their settings are not neglected.

Ivan Plascencia’s colors capture the vivid nature of the Speed Force with striking clarity. The scenes with Barry, August, and Wally using their powers are my favorite because of the lightning effects surrounding them. Another great moment from Plascencia was Barry being struck by the antagonists’ gun, as Barry’s speed and the colors of the ray provide a wonderful technical effect. There are wonderful atmospheric colors that range from crisp and clean, like in Barry’s office, to dark and chaotic in the last pages of the issue, all provided by Plascencia.

There is one part that didn’t sit too well with me. Barry plays by the rules, while August wants to use his powers to be proactive. Barry’s argument is that things must be done by the books and he seems unwavering, while his friend has a starkly different position. Given the state of the nation with regards to police violence against people of color, this sentiment reminded me of the white racial privilege in believing that law will ultimately get things done.

As we’ve seen in the case of Philando Castile, following the rules can still get you shot. This scene reflected the racial politics of today in a way I’m not sure how to feel about, and I hope it leads to a major development of Barry’s character rather than a regression of August to the white societal mean, as would be the case in many other stories where this dynamic emerges.

This was a Flash story that I’m actually excited to finish. While there are politics involved that strike a chord in me, it is truly a great story. I do like the Barry is a static force of good, which reflects his character, and August provides a new dynamic to play off of as a man of color in law enforcement. It was a bit strange to see more elements from the TV show play out in this issue, but they didn’t detract from the story. There’s going to be a great buildup within this new Flash and this team is a great one to see it through.