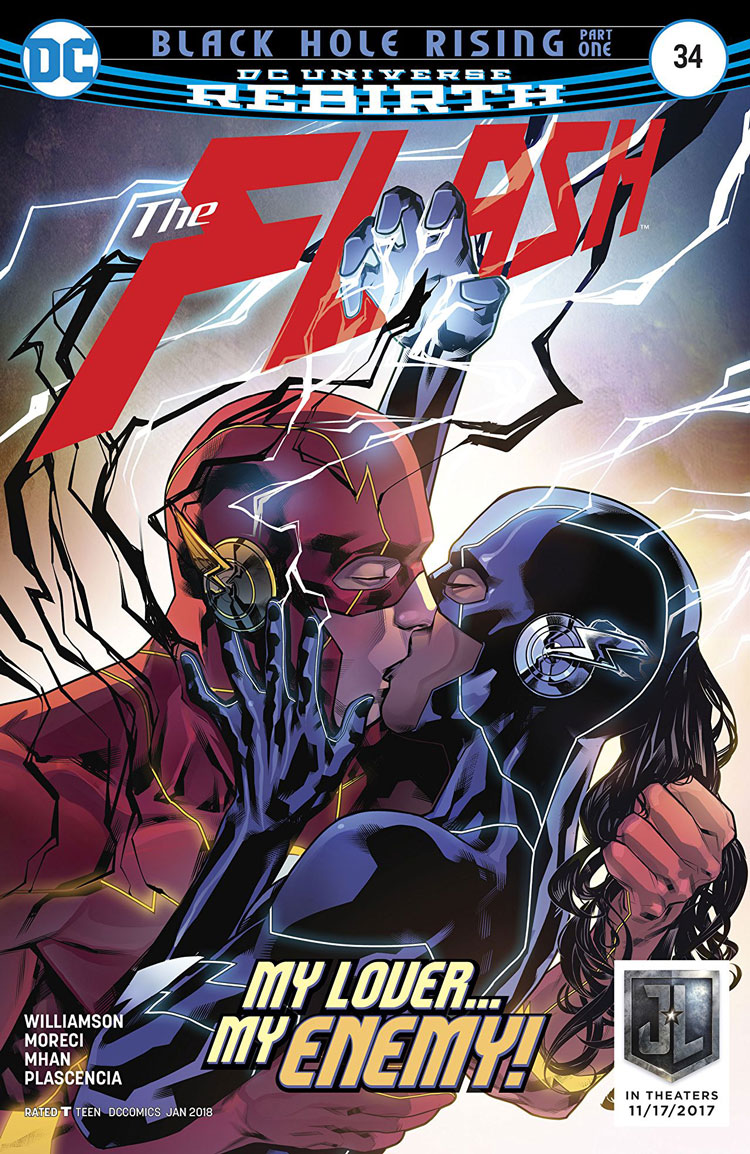 Remember Meena? That STAR labs scientist that Barry fell for in the first arc and got sucked into the Speed Force?

Well, she’s back, has a black version of Barry’s costume, and is just a little too interested in Barry’s new negative speed-force powers. That’s the premise and it’s painfully obvious where the story goes. The cover explicitly telegraphs it. But it wasn’t the predictability that bored me.

It was Meena. Again, we were briefly introduced to her in the first arc and didn’t really get the chance to know her before she was jettisoned into the speed-force. All we know about her is that she is a scientist and had a fling with Barry. Their romance never blossomed on the panels, the connection between them was never fleshed out, and then she got popped into the Speed Force before I could even remember her last name.

I didn’t really care when she left and I don’t really care that she’s back. It’s just something for Barry to be upset and confused about for the next few issues.

I guess her motivations are there. I would be upset too if I got sucked into the speed force and the girl I was dating didn’t make an effort to try to figure out what happened. I mean, I’ve ended things with people because they were flakey with texts. But the heel-turn would have more impact if we had more time with the character and they had appropriately built up her relationship with Barry.

There’s nothing functionally wrong with the issue. Joshua Williamson and Michael Moreci are doing a fine job with the words and I truly enjoyed Pop Mhan’s sketches and lightning effects. Back that up with Ivan Plascencia’s colors and the subtle, yet very demonstrative, way he shades the normal speed lightening and the negative speed lightning and this issue looks phenomenal.

It’s just a shame the plot can’t keep up with the pictures.

The issue is perfectly functional in regards to writing but the villain is too weak to carry the conflict. It’s only the first issue in the arc, but Meena’s motivations just don’t intrigue me and she’s too much of an unknown for me to take her malice seriously. The arc may serve to remind Barry how lonely he is as a result of the strain being The Flash places on his life, because that seems to be the overall narrative Williamson is going for with his run.

And, of course, we’re probably going to see Iris and Barry together for the first time since before Flashpoint, but I don’t need to be here for this part of that story.

The Flash #34 feels like the start of a mediocre and meandering chapter in the life of Barry Allen. I’m sorry for being so blunt, but I have to be honest. This issue is boring.