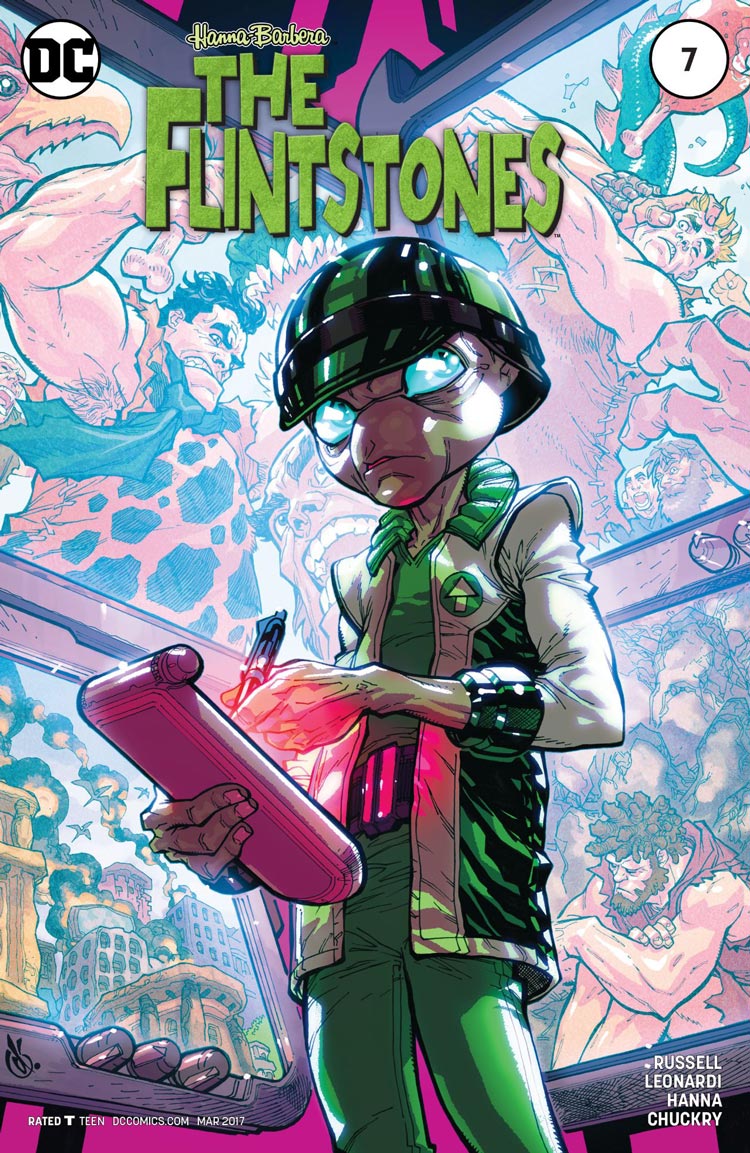 The Great Gazoo is stationed on Earth to monitor the rise of human beings, to protect them from outside invaders, but also to judge. And what he sees in humanity doesn’t make him think they have much of a chance for survival. Can you blame him?

Man, some weeks a book like this would just make me laugh and go on a deep dive into the history of Roman Catholic indulgences and the corruption of Judeo-Christian religions that goes back centuries and weaves its way into our government and corporations to this day.

This is not that week, as so much of what Mark Russell and guest artist Rick Leonardi are weaving through this issue is just a sad reflection of an even sadder state of affairs in the United States, circa January 2017. I didn’t much want to deal with the real world before reading this issue. Now. Eeep.

The truth is, I never felt this way about Prez, Russell’s last satiric series for DC Comics, because it functioned in a startlingly different fashion. When I read that series, one year ago, I laughed at its ludicrosity, smiled and said, God forbid we end up there, even though it seemed like the path ahead.

One year later, that future tale isn’t even as outrageous as real life. It missed its moment of truth between fictional future and “gee, if only it was that simple” by a mere few months, leaving us now with a book that reaches far into the past (in both a literal and meta sense for fans of the original Flintstones television series, something that occupied a much more innocent time for most of us) and shows us a bit of how glaringly heinous our culture truly is today.

“To care for people who mean nothing to us.”

How simple it seems. And truly, Russell gives us a genuine populist hero in Fred Flintstone. A man who loves his family, who works hard, who wants a better life, but isn’t willing to step on other people to get it. He’s willing to defy his boss, who is inches away from insisting a man die under rubble rather than spend another moment thinking about him.

And yet, I don’t get to the end of Flintstones #7 with the sense that Fred Flintstone is the hero, the shining epitome that makes the other things seem so obviously wrong. The corruption, the uncaring corporate bottom line, the alien observer placing odds on how soon a civilization will die out.

Part of why I can’t get to that redeeming moment is because Leonardi, Hanna, and Chuckry do their jobs too well. They’ve woven this pre-historic world into something of a modern day post-apocalyptic-slash-right-outside-your-window scenario, giving us a mindfuck of past, present, and future on every page. Gazoo’s posture and dress — like something out of a Korean War-era television series — juxtaposed with Pebbles, Wilma, and Fred’s clean, bright feel amid the grey stone and dusky lighting, makes me feel like the tension hangs thick.

And doesn’t it? No matter how principled Fred is, does it matter when he’s surrounded by a civilization looking to outdo itself in fear, anger, and hatred? Fred is the everyman, but not in the heroic sense, and Russell captures that with perfect, sublime sadness. Fred is every one of us that wants to not watch the world slide into darkness, who want to do their part. But some weeks, that doesn’t seem like enough. This is one of those weeks. Hopefully, next week isn’t.