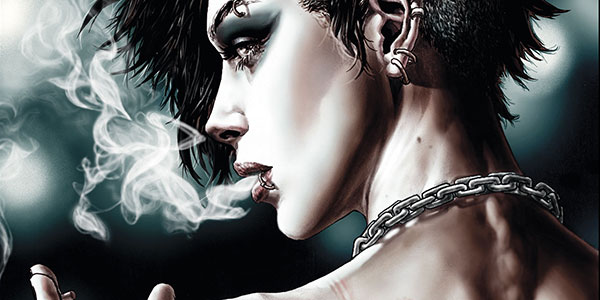 THE GIRL WITH THE DRAGON TATTOO Volume 1
Written by Denise Mina (adapted from the original novel by Stieg Larsson)
Art by Leonardo Manco and Andrea Mutti
Release Date: November 7, 2012 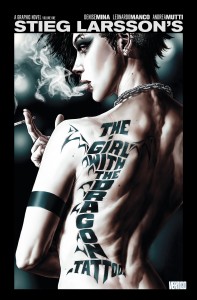 The lives of two people — journalistic crusader Mikael Blomkvist and isolated punk genius Lisbeth Salander — begin to circle the vortex of a forty year-old mystery surrounding the disappearance of a rich man’s niece. The heir to one of Sweden’s most prominent corporations, Harriet Vanger vanished off the family island in a single day, never to be heard from again. Meanwhile, a cruel joke continues to be played on her aging uncle year after year, and the time to solve the mystery has come.

Based on one of the most popular novels of the last decade, this first volume, published by the Vertigo imprint of DC Comics, is as much a character study of the leading protagonists as it is an introduction to a sincerely fascinating murder mystery. A mystery novelist in her own right, Denise Mina is adapting directly from the original novels (and not, in fact, from the slightly different, though equally popular Swedish and American films), so one can’t particularly credit her with the merits of the story itself. Where Mina excels, however, is in translating that story through smart pacing and careful editing to the graphic novel page. Blomkvist’s back story is incredibly detailed both in novel and film form, but it feels as if Mina has pushed forward just enough about his past in order to make him a compelling figure, without overwhelming the reader with unnecessary text. This adaptation is actually relatively light on narration by comparison to many other efforts to convert novels to the comic page, leaving room for the artists to expand out the story through setting and facial expressions. Mina truly excels at pacing and self-control, where a more verbose writer might be inclined to fill in the gaps.

The graphic novel is gifted (or burdened, depending on your perspective) with two pencillers, dividing the labor more or less along the lines of character introductions — Manco handling the development of Salander’s history and Mutti portraying that of Blomkvist. By far, Manco’s pages are the most stunning, exhibiting a level of detail and sad beauty to the Girl herself page after glorious page. The vulnerability Manco draws into Salander’s soft visage, the focus on every wrinkle in her former guardian’s face, and even the doughy sadness of her hacker’s expressions all add up to creating a magnificent pathway through her life and environment. While the gruesomeness of her encounter with her new legal guardian can’t match the sheer terror that same scene imparts in the original filmic version, Manco delivers a frightening progression that will leave even the most overexposed viewer disturbed at the sight.

Mutti, by comparison, does a fine job at depicting the bulk of Blomkvist and Vanger’s portion of the tale, but can’t hope to match Manco’s sheer artistry on the page. I would be disappointed, perhaps, if I didn’t feel that a more standard comic book art-style betwixt spreads of highly detailed — extremely graphic in some cases — line art actually benefits the reader’s eye. To cleanse the palette with a more easy-going, lighter style amid the heavy nature of Manco’s content and delivery is Mutti’s very important role to play in the overall production of this adaptation.

Not for the faint of heart, this adaptation follows through on all of the novel’s major themes, including extreme images of rape, sexual exploitation of women, Nazism, and the moral bankruptcy of corporate society. If you have a strong stomach, and want to experience a beautifully rendered tale of a horrific series of events, this is the book for you.

One other side note: in addition to traditional print format, The Girl with the Dragon Tattoo graphic novel is available in digital form through the Amazon Kindle and Apple iBooks, but not, as of yet, through the Comixology app or digital website. As I have almost exclusively consumed my digital comics through Comixology, I was curious about this decision, but took it as an opportunity to compare platforms. My purely anecdotal result? Kindle and iBooks has a long way to go to match the pure functionality Comixology continues to develop to mimic — or in some cases exceed — the print experience for this comic book reader.