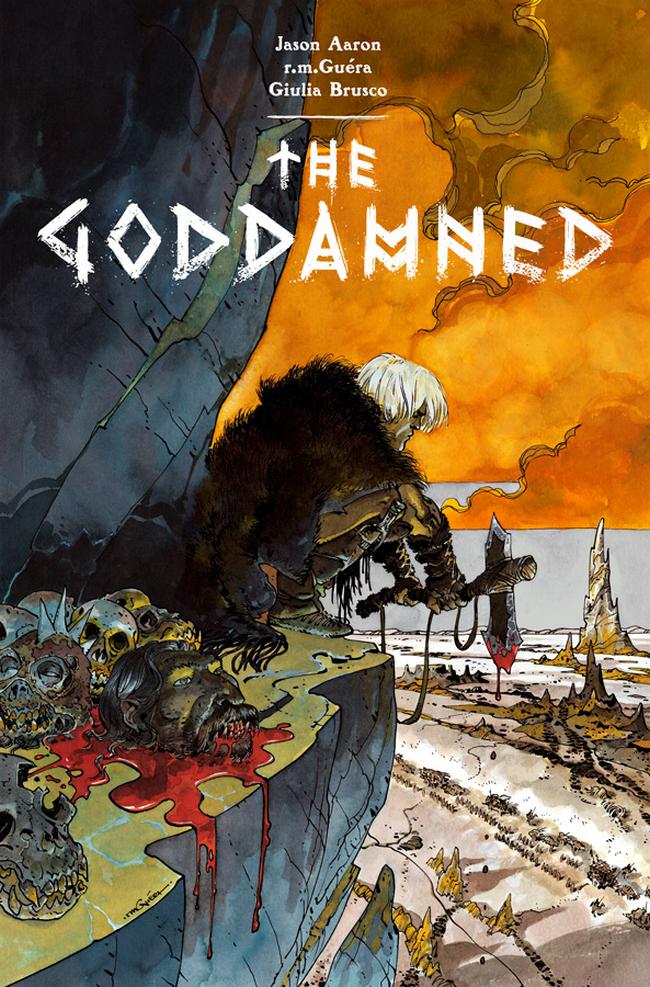 Who would have guessed that a story opening with an offbeat little boy peeing on a mysterious deity in a watering hole would have been one of the best comics on stands today? Well, if you’re at all familiar with Jason Aaron and r.m. Guera, you should have known. The Goddamned #1 marks a brand new series from the creative team that brought us the critically-acclaimed series Scalped, and it’s safe to say that Aaron and Guera have truly outdone themselves on this title.

The Goddamned follows a mysterious stranger, who lives and dies, and lives again. He seeks to destroy the pack of warrior men who were responsible for his not-death, and wreaks a whole lot of violent havoc along the way. The middle third of this issue contains a giant dose of ass-kicking and some of the most brutal fighting I’ve had the pleasure of consuming in comics. The final ten pages provide the backdrop for this story, detailing the stranger’s family and its biblical implications.

There is not a moment in this issue that I stopped cringing. This is a title that truly earns its “mature” rating in the best way possible. Every sentence, every movement is loaded with the coarsest tone. This first issue reads like a pane of perfect glass that’s been gouged by boulders, and it’s truly wonderful. This might be a portrayal of a less than civilized society waaaay back in time, but The Goddamned contains some of the most fluent uses of swear words I’ve ever seen. But the glorious harshness of this issue aside, this first issue is one of the greatest examples of story-telling out there. Aaron drops you right into the mess of things in the first panel, and you are taken on a wild ride from there. The reader is forced to figure things out in a slow, yet startling manner. There’s plenty to wonder about, but just enough there to make you crave more once the hook is revealed.

Guera is a serious powerhouse with this first issue. Every panel has some of the greatest landscape work I’ve ever laid eyes on, bulging with a gruesome mixture of arid drylands and muddy swamp. And, speaking of bulges, Guera captures the rippling musculature of the biblical characters with an unbridled pencil, pushing the contours to god-like proportions without making the characters seem too inhuman. Every panel, every character is detailed — no matter where you place your eyes, there’s something new and beautifully disgusting to look at. Giulia Brusco’s colors are right at home in this setting, providing a mythical, yet realistic palette to this issue. With her colors, the landscape is allowed to be detailed, yet breathe in all the right places. Bodies are accentuated perfectly to allow for an easy discerning between characters. The artwork, simply put, is stunning.

The Goddamned is the kind of book that uses biblical story-telling as entertainment infused with its reference material. This opening issue knows no boundaries, and that complete openness is truly a sight to behold. The Goddamned will punch you hard in the gut with its twist on the familiar tale, rendered beautifully on every page.