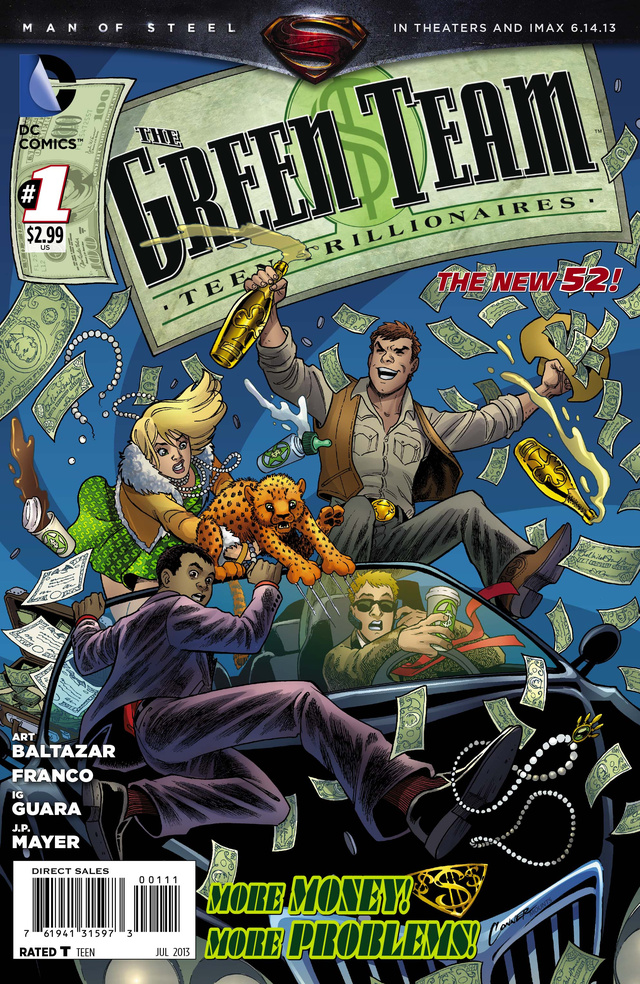 THE GREEN TEAM #1
Written by Art Baltazar and Franco Aureliani
Art by Ig Guera and J.P. Mayer
Release Date: May 22, 2013 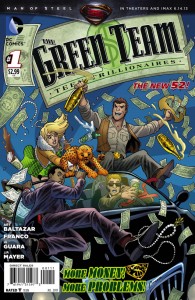 Being a teen in the DC Universe is usually a pretty sad affair. You’re likely an orphan, adopted by some grim vigilante, or some mad science experiment gone wrong. Maybe (if you’re lucky!), you’re just out on your own fighting the good fight and you don’t get your arm ripped off or get kidnapped by an extra-dimensional force of one kind or another. At the end of the day, you’re probably not having nearly as much fun as you thought you would when that lightning struck or your mom revealed you were secretly a princess.

It’s easy to approach The Green Team with a lot of skepticism. Packaged alongside The Movement (somewhat oddly as we’ve now discovered) as the other side of the Occupy phenomenon we now hear so little about, the book turns out to be less about corporate greed and more about millennial values. And contrary to popular belief (among older generations generally), those rarely are consist of being self-involved or unfocused. Art and Franco have made the transition here from DC Kids line to the New 52 with an exceptional representation of teen values at their very best among those who were born around the days of Y2K. Their main characters — a group of teen trillionaires who spend their time in search of new technology and innovative ideas — are surprisingly likeable and stray very far from the stereotype of the spoiled Richie Riches and Lindsey Lohans we’ve come to expect from our pop culture media. Commodore comes off smart and secure, but not patronizing. Cecilia, the young movie starlet, is fun and witty without reducing herself to Marilyn-style vapidity. Mo is a little starstruck, ironic for the prince of a small country, and it adds to the potential depth of each character that they exhibit just enough charisma and honesty to let the reader know she or he will be dealing with unique protagonists.

The appearance of the villain, Riot, is a nice antithesis to the glamour the Green Team seems to exude even in a dusty old warehouse. Guera’s treatment of his look, particularly in contrast to the subdued, but expensive outfitting of the teens, is a key part of how this first issue begins to pick up its pace. Art and Franco had a bit of set-up to do here with character, and I’m glad they took the time, but the overall pace of the book felt slow until Riot’s arrival as a result. Otherwise, Guera maintains a rather clean, classic style that keeps you interested even amidst a series of talking heads moments — leaving me feeling like every scene still had a lightness and enthusiasm to it that many readers have felt has been lacking in mainstream comics today. Far from a dark drama, The Green Team is poised to be a roller coaster of fun the likes of which we’ve been clamoring for from DC Comics for some time.

There’s no question this title remains tied to The Movement, if only in its complete opposite nature and perspective on the world. Our trillionaires don’t see a world corrupted by authority (because if they aren’t the authority themselves, they certainly rest comfortably above such concerns), but they certainly don’t believe they are living in a perfect world either. With details like remote laser surgery and new internet-based technologies (Imagine! A car run by the disagreements garnered over this review!) already taking center stage, this title is sure to give an equally curious perspective to the DC Universe as its sister book, and one which we’ve not quite seen fully explored to date. An excellent start to a very unique re-envisioning, The Green Team #1 is your look into a much more optimistic vision of youth in our culture, and a great win for expanding the vision of the New 52.