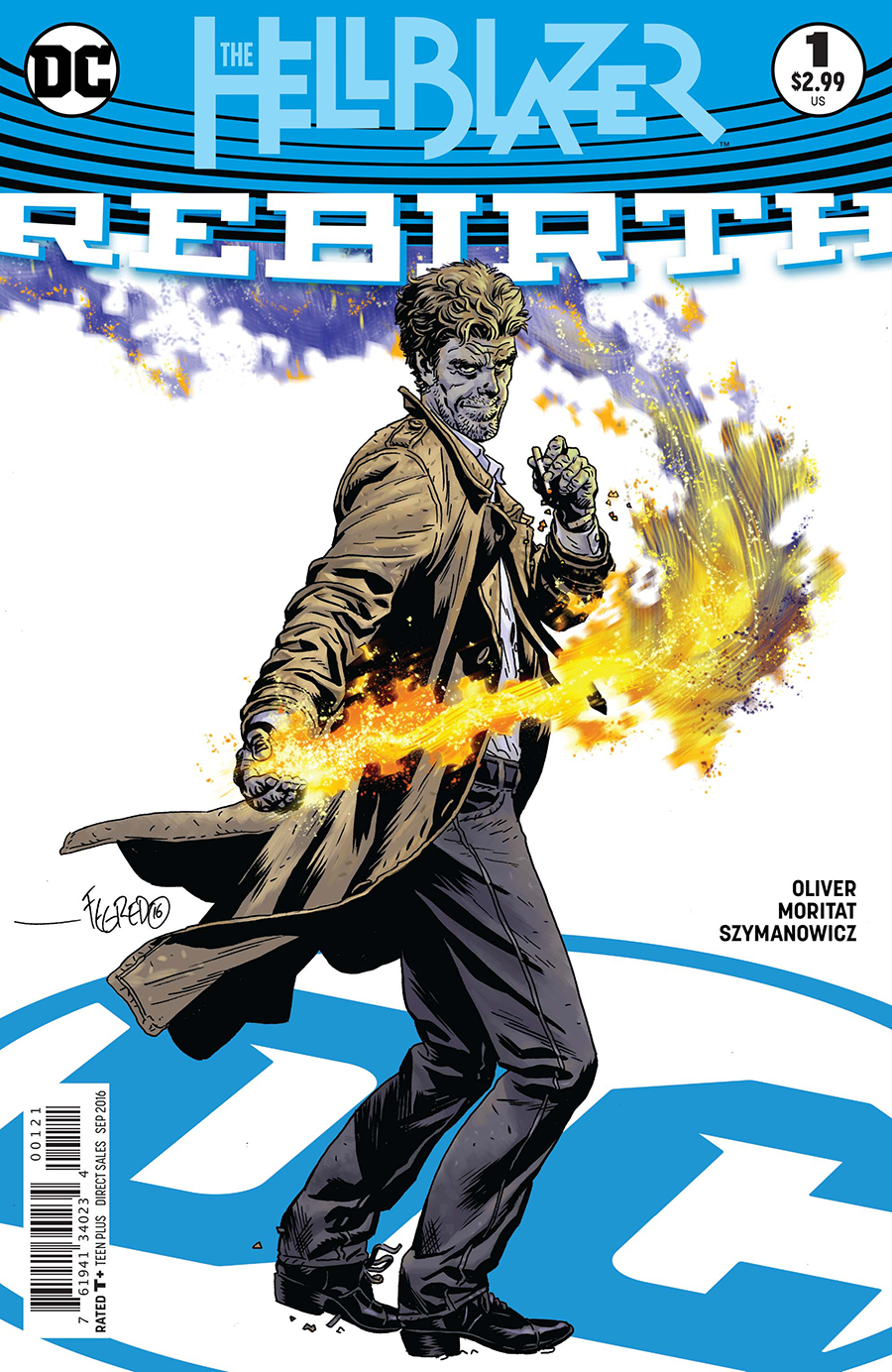 Being glad to have John Constantine back in your life is probably the last reaction he, or anyone else would expect a person to have, but thanks to Simon Oliver and Moritat, that’s exactly where I find myself.

I had a lot of fun with the outgoing team of Ming Doyle, James Tynion IV, and Riley Rossmo on the title. They offered a fresh and lively take on the character at a time when his presence in the DCU was at its weakest, which is a state of affairs that Oliver and Moritat immediately set about rectifying in their debut issue.

Such is the long and winding history of Hellblazer that the idea of nostalgia or a return to form could mean many things, depending on whose run you hitched your star to — whether it’s all the way back to Delano and Ennis, or a latter day run like Azzarello or Carey’s. Oliver casts a wide net in that regard, but some of the issue’s greatest charms wind their way back to Constantine’s earliest days in comics.

Constantine making a reference to owning a Batman toothbrush from the back of Chas’ cab seems like a very small thing indeed, but it’s more or less the first time since the iron curtain between Vertigo and the DCU proper was torn down that we’ve had a proper taste of the cheekily antagonistic relationship he had with conventional superheroes prior to its erection in 1993.

It’s not much more than a footnote now, but Constantine calling Batman “squire” in Crisis on Infinite Earths was a pretty big deal at the time, a particular pleasure withheld from pretty much an entire generation of Hellblazer readers. We don’t see John interact with the Justice League directly this issue, but they’re there hovering skeptically at the fringes right where they ought to be.

The more familiar and explicit joy of the classic approach Oliver and Moritat take this issue comes with an oblique reference to the most iconic Hellblazer arc of all time, Garth Ennis and Will Simpson’s “Dangerous Habits,” in which Constantine more or less dies of lung cancer. The most infamous bit of the arc, however, is how he manages to cheat death by selling his soul to multiple demons, guaranteeing that should he ever die it would instigate a bloody civil war. Truly the Helen of Troy of lost souls, he is.

This issue opens with a similar gambit on John’s part, by suggesting to the demon that had him cornered he’d be liable to foment a revolt in Hell against him if sent there. Constantine escapes with his skin and most of his soul intact, but barred from London by a particularly malicious curse that sent him packing to New York for the weekend.

Upon his return, armed with 200 Silk Cut straight out of the duty free store, he engineers a classic standoff with the demon, using a spell that deflects the curse from himself to the entire city, forcing one of his old “friends” — a psychic named Mercury — into action as Swamp Thing holds Captain Marvel and Wonder Woman back from intervening.

Playing chicken with demons is Constantine’s oldest and most notorious hobby, but what makes “Dangerous Habits” such an anomaly is that the weight rarely threatens to fall on John should he fail. The instance of this that has come to define him in recent years is the Newcastle incident, originally depicted in Hellblazer #11, and referenced here by Constantine’s current nemesis.

The Newcastle incident would, under most circumstances, make for a classic superhero origin story. Constantine and his band Mucous Membrane, upon breaking into a club to get paid for a gig, found a little girl the only survivor of a demon’s massacre. Constantine, in his hubris, attempted to summon another demon to destroy the one responsible for the massacre, but only succeeded in getting the girl sucked into Hell instead.

For many, this would trigger a lifelong journey of redemption, and “Laughing Boy,” as John calls the demon, thinks he can use the prospect of restoring her soul to get the upperhand. But this is John Constantine, and he has no such luck.

It’s intriguing to see the Newcastle incident continue to get used that way, when Constantine never truly had an origin story or an original sin until the lamentably short lived TV series organized itself around the event. It certainly is a key story in the earliest Hellblazer issues that established Constantine’s first major nemesis Nergal, but faded from prominence as the mythos expanded.

It works nicely here though, as it establishes Constantine as an antihero in the truest sense. When Peter Parker’s arrogance cost him his uncle’s life, he martyred himself to it and drew his mantra out of it. With great power, comes great responsibility, as he’s fond of reminding us. Conjob, however, has little interest in power and absolutely no sense of responsibility. So if Constantine is back to lurking at the fringes of the superhero world, it only makes sense to position him with an origin story that completes the inversion.

The great, unintended irony of the issue is that what prompts John to return to London from New York is the prospect of Donald Trump’s candidacy for President (referred to here as a “racist, short-fingered failed meat salesman”), given that the disastrous Brexit vote and the cascade of failed coup attempts within the ruling Tories occurred somewhere between Oliver’s final draft of the issue and its street date.

Welcome home, indeed. To our eyes reading the issue on release, John is returning to a political environment of superheated racist Euroscepticism presided over by a female, Tory PM. Nostalgia for Jamie Delano’s Hellblazer run is proving itself to be quite the monkey’s paw as Oliver and Moritat have seemingly been plunged into a near perfect reconstruction of the trying political times that birthed their wily protagonist.

It’s a sad commentary on the state of affairs that England seems poised on the brink of a return to Thatcherism made even bleaker by the prospective Euro exit, but that is also traditionally where Constantine is at his best. DC, particularly through Karen Berger’s efforts and the nascent Vertigo line, played a willing and eager host to vicious satire of life in the UK at the time and no one, for my money, struck harder and more often than Jamie Delano. I recently took the position in my column for London Graphic Novel Network that we find ourselves with the most acute need for bravely political work in comics since the 1980s, so should they choose to, Oliver and Moritat have the tools to become the standard bearers for a new era.

Allusions to Trump aside, this isn’t an explicitly political issue, but the devil, as they say, is in the details. I’m quite fond of referring back to a Federico Fellini quote Brandon Graham used in the first issue of Island and it takes on a particular import here. “People ask me ‘why do you recreate Venice in a studio instead of using the real one.’ I’ve always been surprised by such questions. I have to recreate it because I have to put myself in it.”

In comics, the option of shooting on location doesn’t exist, artists must always recreate a city in a studio, and as media critic Sean T. Collins recently mused on Twitter, in comics, unlike film and television, every aspect of the imagery is deliberate.

So it says a lot about the kind of London that Oliver and Moritat want to construct for Constantine that he finds himself surrounded by the mundane humanity of it, whether on his flight home or in the crush outside Heathrow. The latter has painstakingly rendered a populace that reflects the true diversity of contemporary London contrasted by a campy advert of the Queen in sunglasses flashing a peace sign with “Laaaaaandan, mate. Laaaaaaandan,” above her.

These are the people that Oliver and Moritat want us thinking about when Laughing Boy threatens what he calls John’s city, and the people that Mercury is forced into action to protect. We’re not talking about anything as revolutionary here as Paul Cornell putting Excalibur into the hands of Faiza Hussein here, but it’s worth ruminating on in considering the racially divisive politics forced to the forefront of contemporary English life by the likes of Brexit champion Nigel Farage.

The gulf between the DC You’s Constantine: The Hellblazer and Rebirth’s The Hellblazer is probably best found and explained in the contrast between Riley Rossmo and Moritat’s approaches to the character. Rossmo’s open faced, impish Constantine that gave him a thin patina of, if not exactly innocence than guilelessness, is what both gave those issues their life and energy as well as what permanently separates them from the original Hellblazer series and what the current title looks to be recapturing. Moritat’s Constantine is aware that we know what he really is and isn’t much bothered by it.

Moritat’s style of cartooning is significantly removed from the hard edged, less kinetic work of the biggest Hellblazer contributors over the years like Sean Phillips, Will Simpson, Steve Dillon, Marcelo Frusin, or Leonardo Manco but he leverages it to provide unmistakable emotion and inflection to the dialogue that makes plain Oliver’s intent to draw on the Constantine of yore.

Moritat’s collaboration with Andre Szymanowicz on colors achieves much the same effect of doing Hellblazer things using tricks more or less new to the title, mostly by using cool blues embedded in London’s grey skies clashing with the warm reds of spell glyphs, demon blood, and dramatic lighting. Beyond just establishing the oppressive atmosphere of Constantine’s London, they further use the clashing tones to make Captain Marvel and Wonder Woman appear especially dissonant in that space by bathing their natural colors in a red hue that pops them out of the grey-blue skies behind them.

While Oliver’s snappy dialogue and various tips of the hat to the thirty plus years of Hellblazer lore are undeniably on point, it’s Moritat and Szymanowicz who do the most to reassert the tone and values that have defined the character from Delano and Ridgeway to Ennis and Dillon through to Azzarello and Frusin.

To say that John Constantine has never felt more relevant or connected to his most iconic self is about as dark a comment on the times as one could make, but that’s exactly what Hellblazer was created to do.