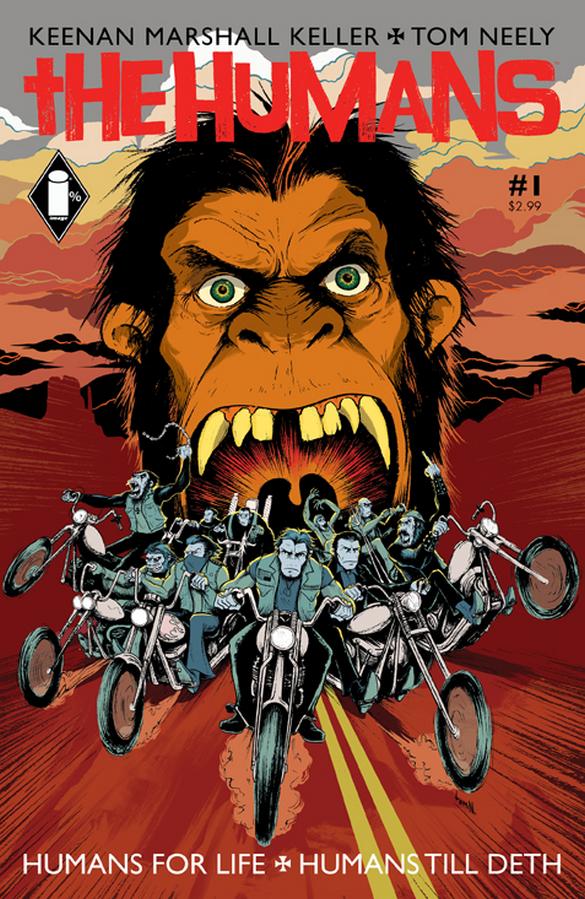 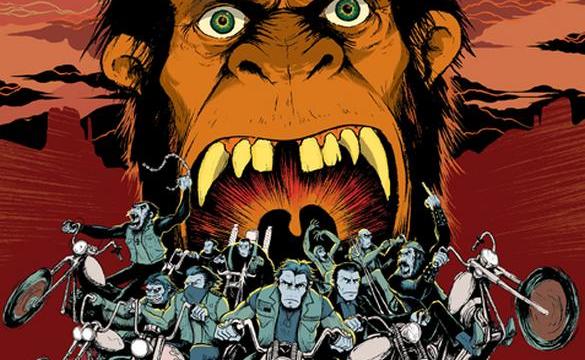 The Humans is a comic that oozes badass.

On the surface, The Humans #1 is a fairly straightforward introduction to a biker gang that also happens to be a group of apes. But this comic is so much more; it’s a tribute to the exploitation biker genre films of the 1960s, a throwback to 1960s comics, and a deeper look at the interpersonal relationships of gang members. When you put these elements together, it makes for a wild read that is sure to hook readers looking for supercharged excitement.

The series opens with the Humans gang on the open road, biking at top speed. The narration text is big and bold, and begs to be read in the voice from the Grindhouse trailer (just search for it on YouTube). “A procession of chrome and raw power!” screams across the pages into what is arguably the best title spread page of the year. In these pages, the reader immediate knows there will be fights, debauchery, partying, fights, and more fights to come. The colors are bold, the scenes crazed, and the big middle finger right in your face confirms what kind of characters we’re dealing with. It brilliantly succeeds at what a debut issue should do: set the scene. In this case, our scene is Bakersfield, California, 1970, a time when drugs, sex, and rock and roll flowed more freely than water.

Somewhat unexpectedly, one of the most effective elements of the issue is its ability to juggle these outrageous biker elements with the softer, more “human” elements of these ape characters. While laying their fallen friend to rest, Brother Marra delivers a speech that feels sincere and will touch anyone who has lost a friend. Of course, this is immediately followed by drugs, sex, and violence, but the two emotional tones flow together in a satisfying natural progression.

The violence contained within this comic is another standout and one of my favorite aspects of the issue – many comics that have come out in recent years have billed themselves on violence, and often deliver buckets upon buckets of blood and guts. The Humans opts for a more modest approach, with a mere two panels featuring blood. Instead, we’re treated to punches, kicks, and slaps accompanied by “WHOMP,” “KRAK,” and “SPOKK”! The whole fight scene feels fun while also maintaining that rebellious nature that the book has built up until this point. The color scheme used by colorist Kristina Collantes reinforces this feeling, with reds, oranges, and yellows that are reminiscent of old comics. Not only does the color scheme help identify who is in what gang, but it evokes the retro coloring of comics that had a much more limited color palette to work with. The “lost in time” effect of the book is in full swing and plays out with furious energy.

Artist Tom Neely admits that he is tackling his largest project yet with The Humans (see my interview up now on this site!), but he handles it like a true veteran. Each scene is crystal clear, and in conjunction with the color work, it really does feel like we’re getting the story out of the pages of a 60s exploitation film. The heavy usage of sound effects contributes to the sensation that you’re watching a movie, with the rumbling of engines, the “BOOM” of a shotgun, and the “POW” of each punch. A favorite panel of mine is the introduction of rival gang The Skabbs – the motorcycle engine sound is palpable, and the reader gets a good look at some ugly faces about to get in trouble. That whole scene is drawn in such a way that it made me want to jump in there and do some fighting myself.

As I wrote earlier, on the surface The Humans #1 is just a violent, drug and sex fueled gang fight. Surprisingly, Keller and Neely are able to inject a lot of humanity into these characters despite any craziness that is thrown their way. I can’t wait for issue two to continue this badass ride into oblivion after seeing what they were capable of here. Just don’t show it to your kids.