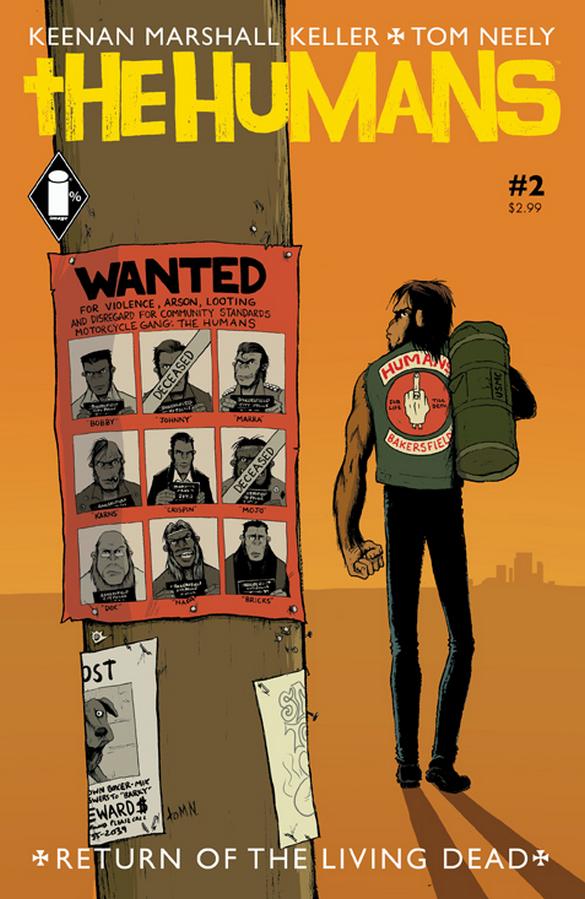 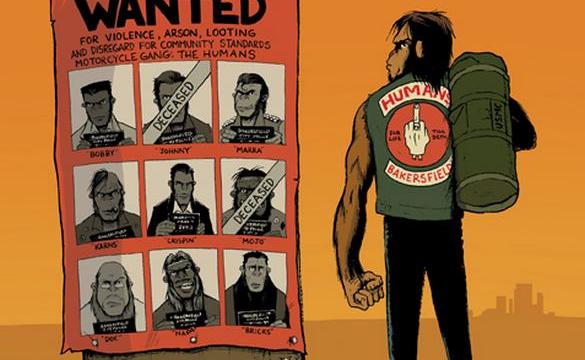 The Humans #2 might not pack the punch to the face that the first issue did, but we’re still treated to some wild moments in this tale of one soldier’s return to his old life.

For those that missed issue one (which I don’t recommend missing), The Humans follows an ape biker gang in Bakersfield, California, 1970. They’re rough, rowdy, and ready to fight! We were treated to debauchery, violence, and an exploitation film vibe that set the stage for a lot of craziness to come. Issue two feels like a departure from this, with the focus shifted to brother Johnny’s return from the battlefield and his reacclimation to his old life. The untamed insanity is less pronounced here, but the story still finds ways to inject edginess at the right moments to keep readers interested.

The strongest element of the issue is the depiction of Johnny’s struggle to restore some semblance of his old life. He finds no solace in religion or the law, but instead finds himself shouting “Hoo-rah!!!” and saluting the desert during intense flashbacks of training camp on his walk home. Later, these flashbacks will provoke the rage that stems from his inability to find a place away from war and his need to suppress a lust for violence. The scene where Johnny and his brother Bobby reconnect is among the best in the issue, as Johnny questions his past and destroys his own memorial in a ferocious fit. The reader can’t help but feel sympathy for the man (er, ape) that feels lost in space, especially with the knowledge that he will channel this pain through extreme gang violence.

Tom Neely and Kristina Collantes’ art plays a huge factor in emphasizing Johnny’s internal fight and add extreme flavor to the issue. There are times when his face is full of fury, and others where he is clearly disgusted with himself. The powerful red and orange coloring contribute to this angry mood and accentuate the growing evil within the character.

On the topic of the book’s art, it’s impossible not to touch on the two stellar double-page spreads in the issue. The first of Johnny’s flashback to the battlefield illustrates his transformation into a “Commie-killing, Douc-crushing war machine!” complete with a merciless drill sergeant baring his ape teeth and yelling. In these two pages, the reader is thrown through the frenzy of boot camp and shown how Johnny came to possess his personal demons. The second double-page spread features Johnny’s escape from his pain in the form of a wild drug and sex trip. Here he is stretched and torn by the gods themselves in a representation of exorcising his suffering. Whether or not this drug and booze-fueled extravaganza is successful will have to wait until next issue, of course!

Though it may not be as over the top as the first issue, The Humans #2 is very successful in introducing new, strong characters into the mix without going too deep into the realm of complete absurdity. The humanity of the characters shines through at all times, whether it is the representation of Johnny’s own struggle or the other gang members just happy to see their friend back home. It’s clear that Keller and Neely are building up the foundations for an impending storm of violence, and this issue goes a long way in making the reader better understand the pain and motivation of what’s to come.