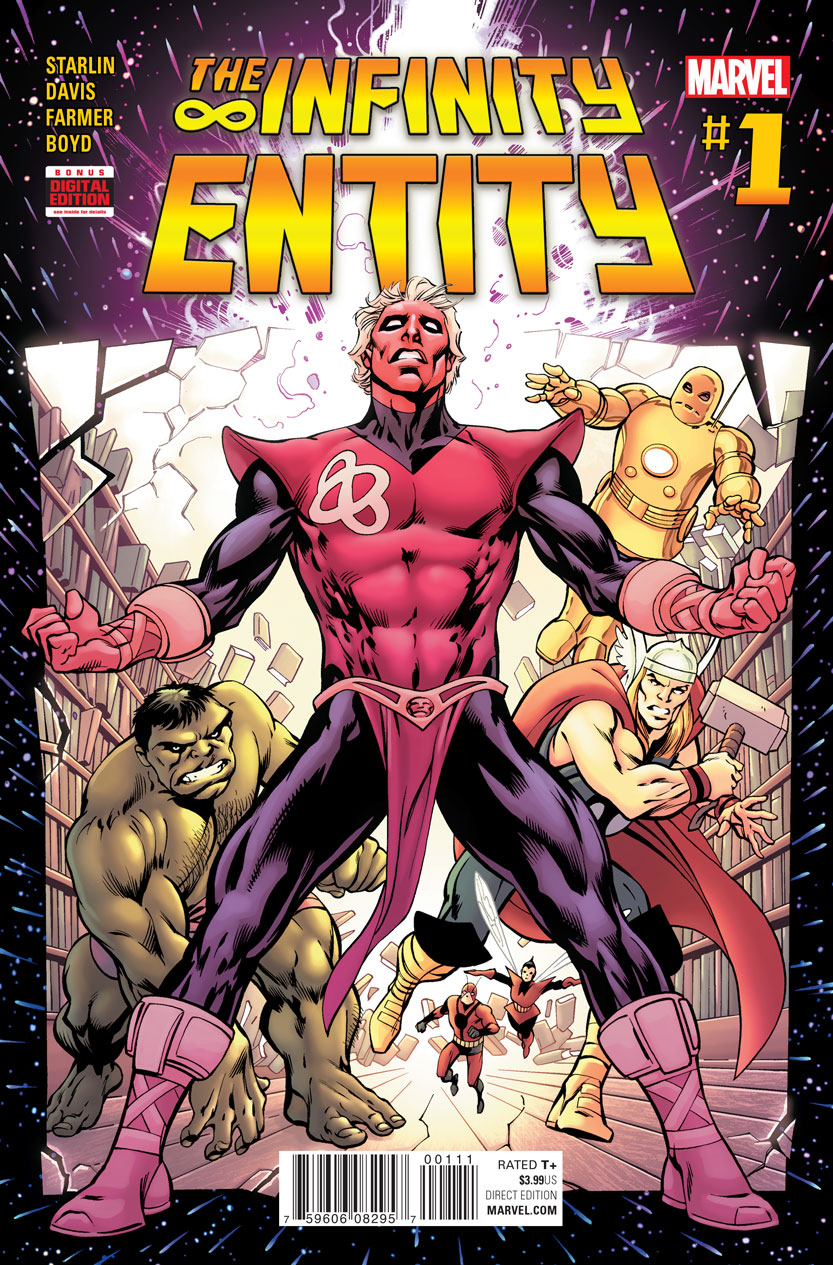 Any time Alan Davis draws a comic, it’s worth looking at. When he draws the Avengers, it’s worth buying. When he draws the ORIGINAL Avengers, it’s worth sharing. Or, at the very least telling people, “GO! Pick up the pretty comic and look at the pretty pictures!” Those pretty pictures range from the Big Bang to Giant-Man crashing through the floors of Avengers Mansion. Davis owns every panel and gives readers a lot to marvel at. Davis doesn’t stop with the Avengers, however, as Starlin’s story spans time and space.

With Jordan Boyd’s bold colors and Mark Farmer’s organic ink work, Davis’ work in The Infinity Entity #1 is memorable and iconic. Boyd and letterer Joe Sabino put a nice polish on the comic, helping lock the visuals of The Infinity Entity #1 down. With Avengers of yesteryear, Warlock snatched from time and hopping through the timeline, and Alan Davis on art, the reliably solid work from Boyd and Sabino help make this comic timeless.

Fairly light, or rather self-contained on continuity, the plot of Warlock’s quest for identity drives the story and it seemingly haphazardly darts from one point to another. The as-needed nature of Warlock’s powers gives the character the ability to do whatever the story needs, from healing allies to transporting himself. Yes, it’s convenient and it empowers Starlin to include the original Avengers alongside the once and (future?) member of the Guardians of the Galaxy. Without boundaries, Starlin is able to get creative and (apparently) write for his artist. At the story checkpoints, however, Starlin delivers. He uses Warlock as the narrator and point-of-view character, but he doesn’t dictate the plot through a Warlock filter. Readers may have a shade more of a clue than the cast of this comic, but Starlin helps immerse the readers in the adventure at hand.

The issue leaves readers with an eyebrow-raising confrontation on the final page. It’s not an edge-of-your-seat-clutching-the-armrests cliffhanger, but it is an opportunity for this galaxy-spanning adventure to get even more cosmic. Starlin is spinning new yarns in his corner of the Marvel Universe. The light connection to continuity and the surrounding evergreen graphic novels make this (projected) weekly story not a necessity, but a nicety. This comic is an entertaining read that is certain to please fans of Adam Warlock, Jim Starlin, Alan Davis, or any combination of those three. Davis is what drew me in, but the story has convinced me to come back for more, despite me never being overly invested in Warlock beyond his role in the Dan Abnett and Andy Lanning Guardians of the Galaxy series.