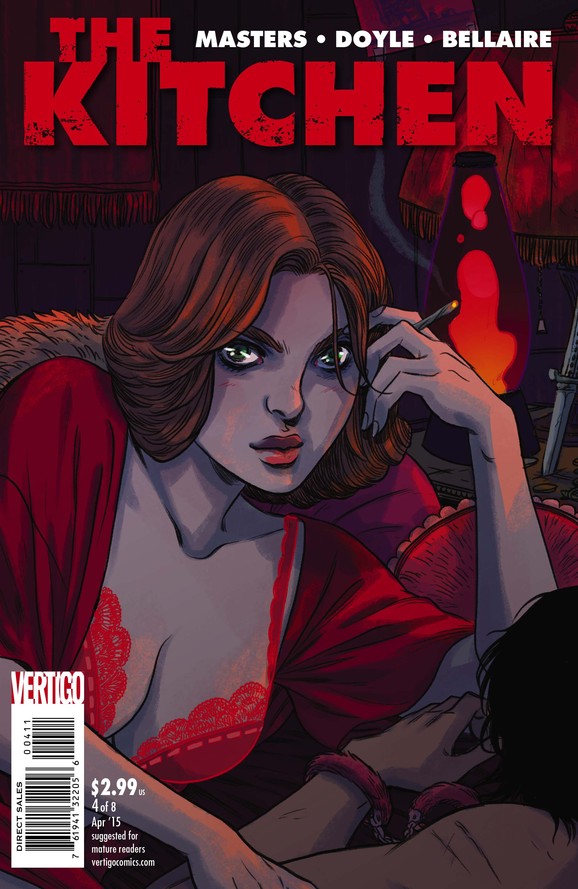 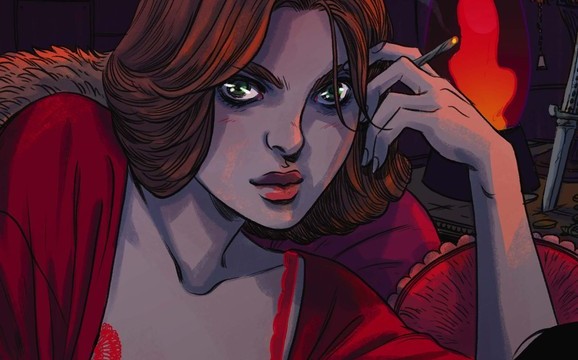 We’re back with this month’s installment of The Kitchen. Last issue, we were left with the news that Angie, Kath, and Raven’s husbands were being released from prison and would be returning to Hell’s Kitchen. Because that could spell the end of their operation, what fallout from this new twist stood to determine the direction of the rest of the miniseries.

Some of you may remember that the last issue disappointed me for a few reasons, but this latest installment completely corrects those things and has returned it to the brilliant path on which it started.

The opening features Angie and her reaction to the return of her husband Rob. Angie in particular has really come into her own. Given where the character started, it’s amazing to see her as the heavy-hitter. She wears the role of gangster muscle very well and her trajectory has been very, very satisfying. If you have any doubts about who Angie has become, the creative team puts them to rest within the first two scene. However, there’s still some great emotional depth to her that we see in both the opening scene and a single fleeting panel later in the issue.

The team does a great job of making all of their protagonists three-dimensional; they don’t stray into the stereotypical Irish mafia roles because of their emotional complexities. I think the structure of the issue says it all. Not only are we given scenes with each woman dealing with their husbands coming back into their lives, but we are also shown scenes in which they’re doing their gangster thing.

It would be so easy to write an issue about either of those things on their own, but instead both are handled at the same time and given equal weight. The emotional content is just as important as the wheeling and dealing that comes with earning money in Hell’s Kitchen. By the very organization of this issue, the creative team is demonstrating equal validity to these typically feminine and masculine narratives.

I mean, what I’m really trying to say here is that the creative team is proving that gangs would be much more effective if they were run by women. A character almost makes this exactly this argument during a very well-crafted expositional scene about how Angie, Kath, and Raven have been so successful, while catching you up on the story thus far. He’s also making a point to flesh out all three of the protagonists, rather than just making one the star of the show. Because Kath dominated the narrative in the first two issues, Angie and Raven become the focus in this issue. It’s possible that Raven might even be running the show now, which is definitely an interesting turn.

In fact, I would remark that the biggest misstep of this issue is the very very end. We get just a small scene with Kath and her husband and it’s just a little bit more ambiguous than I think really worked. I felt as though I was meant to understand something that I wasn’t fully getting through the character’s interchange. Whether I really did miss something will be revealed in the next issue, though, so this is a very minor complaint.

I also want to take a step back here and re-iterate how much I appreciate a story driven by women, in case that wasn’t obvious already. That was what was lacking for me in the last issue and has been made up for in spades this time around. I love that the overwhelming message is that these women can and will stand on their own, that they are the best people for this job and they know it. There’s a tenacity to these women that is to be admired.

Now, if any of you guys follow my reviews, you know that I love seeing fashionable, appropriately-dressed women in my comics and The Kitchen delivers, especially with Angie. I know I said that I love that she’s a heavy hitter, but I also love that she’s a heavy hitter in high-waisted shorts and cork wedges. Guys, she’s a gangster in cork wedges. Come on.

Also, once again, I think Ming Doyle’s heavily-lined style does a great service to the dirty feeling of Hell’s Kitchen and the work these women are doing. Nothing is ever clean and in some scenes you can almost smell the city in summertime. It’s fully appropriate to the genre and sets the mood very, very nicely. I can tell what kind of book I’m reading just by Doyle’s technique

Meanwhile, Jordie Bellaire continues to do some solid work with colors. As is fitting in a gangster book, we see some blood, which Bellaire noticeably well. It’s eye-catching enough that it means something when you see it, but it never strays into the farcical. The colors also do a great job at dictating time and place. It is immediately clear when we are in a flashback or a darkened room. I’m especially into a particular scene with Raven that was done in almost completely in very calm, soothing blues—only to be interrupted by her husband, who bursts into the environment with some oranges and browns.

If you like a good read and you are not reading this book, you are making a mistake.