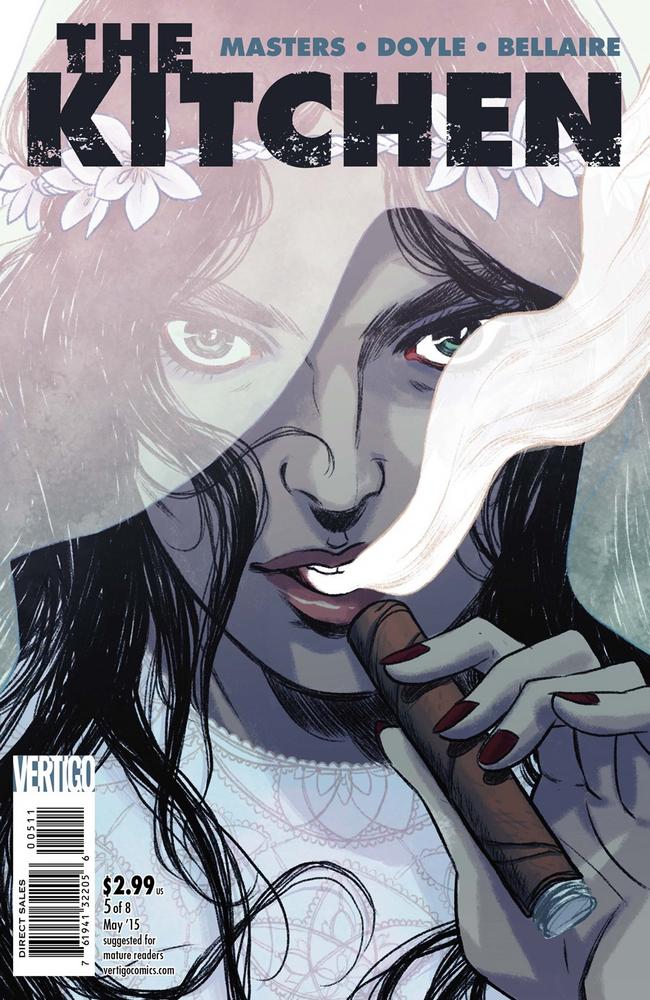 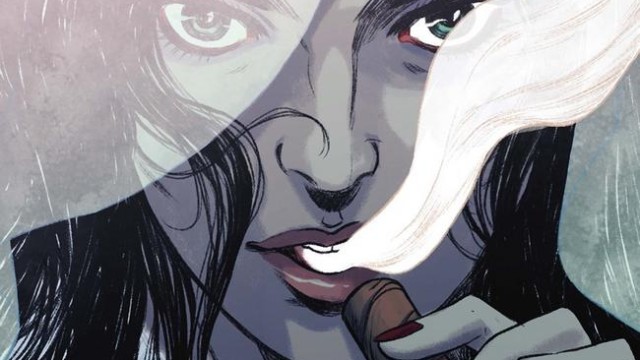 The Kitchen #5 finds us picking up with the consequences of Angie, Kath, and Raven’s new decisions. We learn how their husbands take the decision to continue to collect for themselves as well as what exactly needs to be done in order to solidify their alliance with the Italians.

Before I go on to talk about the actual interiors, I want to drop something really quickly about Becky Cloonan’s covers because she’s been doing a phenomenal job. Every cover has been great thus far, but the one for this issue in particular really struck me. It encapsulates everything that’s great about the comic, celebrating the feminine while taking on a traditionally male narrative. I love that Raven is shown smoking a cigar (typically male) and that the smoke is made into the veil for a wedding dress.

I’ve been thinking a lot about body types in this issue of The Kitchen and how much I appreciate the way that Ming Doyle draws women. I like how she draws men too, but the stakes are higher for the ladies.

(If you’ve been within 50 feet of Twitter this week, you’ll know what I’m talking about. If you haven’t, bless you, and stay far far away.)

Anyway, I’m particularly looking at the way she draws breasts. On page 3, Kath and Raven are both depicted as being decently endowed—but in a refreshingly realistic way. There’s a satisfying amount of space between Kath’s breasts; she has some amount of cleavage but hardly enough to qualify as being male-gaze-y. They also sag somewhat! Which is great!

Am I turning you off right now by discussing sagging breasts? Good, because that’s not the point of this comic in any capacity and the artist is much more committed to drawing real women than she is women that men may or may not want to look at. Though, let’s be real here: Kath is gorgeous, as is Raven and Angie. That those two things are both true is part of what makes this comic great.

And, of course, I’ll say again as I’ve said each time that I’ve written about this comic: the art style really serves the content well. Lots of lines and lots of grain seem to really fit the 1970s aesthetic. The outfits definitely help too. If you ever wondered what 3 women would wear to a mafia hold-up, well, Ming Doyle is here to tell you.

Jordie Bellaire is also doing the work, as usual. This go round, I’m noticing the way that she does lighting and how things often seem to glow just the way that they’re supposed to. A lot takes place in the dark in this issue, though I have to say my favorite panel in terms of coloring is probably the one where a character is being dragged into an alley—you can see, just by the way he’s lit, that his body is being turned slightly upwards at the light is hitting it more directly than it would be if he were upright.

In this issue, I have to say that Tommy was my favorite. I can’t be specific about why since I’d like to let you guys find out for yourselves, but suffice it to say that I really appreciate male characters like him and what it seems as though he stands for. Back in issue #3, I was a little dismayed by how much the narrative seemed to focus on him, but I think this installment strikes a much better balance. We get just a little taste of Tommy, enough to further the plot, hint at character development, and even strike a few emotional chords—but he doesn’t dominate the story like he did previously.

We also continue with the balanced male and female narratives. We get forward motion in terms of their gangster activities as well as the ladies’ personal lives, this time with the focus largely on Raven. I also appreciate how much we get of Kath and Raven simply talking to each other about these issues. Their plans for the Italians and how to go forward are as much on the table as Raven’s ongoing affair with one of the Italian gangsters. It’s incredibly silly, but two women talking about things with that amount of breadth is relatively hard to find in mainstream comics.

Also? Angie is a boss. For real. I think she’s got the least attention of the three women but she’s also turned out to be the most interesting of them. She makes some rather astute observations about their situation and pulls off some impressive shooting in this issue. As much as Raven seems to be running things, it’s Angie who seems to be the born gangster and the heavy-hitter.

My main critique of the narrative for this issue is that there wasn’t as much forward plot motion as there has been previously. This is a minor qualm, since quiet moments are important in storytelling, but it is something that kept this at a ‘good’ issue rather than a ‘great’ one. In fact, it’s the quiet moments that seemed more significant to the big picture than the big action scene. Some of it I think could have been told in fewer pages in exchange for moving things along to the newest development,.

All in all, The Kitchen #5 is yet another solid read from the Masters/Doyle/Bellaire team-up, with a particularly killer cover by Cloonan. Beautiful art, amazing story—all wholly badass and feminist, which is exactly the kind of thing I’m here for.

Love yourself. Read The Kitchen. You won’t regret it.