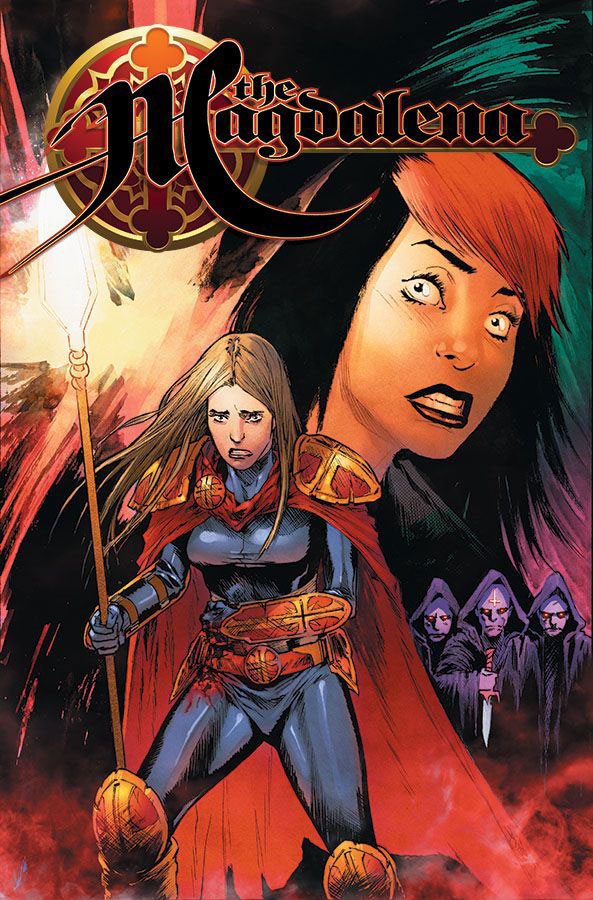 It might be going too far to say that the Magdalena is the strangest concept to come out of Image’s first decade of publication because if we’re keeping it real, there was some really bizarre stuff in the early days, but it would definitely make the top ten.

When the character first appeared in The Darkness way back in 1998, the idea of a nun who was also the direct descendant of Jesus via Mary Magdalene fighting evil as a secret agent was about as out there as you could get, even before taking in the fact that she was doing so in a skin tight crop top and bikini bottoms.

Despite the costume, The Magdalena was oddly ahead of its time in other ways, introducing readers to an idiosyncratic spin on conspiracy theories and fringe theology that wouldn’t hit the mainstream in a big way until five years later when Dan Brown published The Da Vinci Code. Such was the fixation on conspiracy and the occult that drove The Magdalena’s creation, not only was her origin a superhero riff on The Holy Blood and The Holy Grail, she was introduced mowing down Nazis to get the Spear of Destiny back from them.

For long time Top Cow readers like me, it’s a fun trip down memory lane but as the new creative team demonstrates, it doesn’t have to be anything more than academic. Writers Tini Howard and Ryan Cady aren’t looking to serve up winding history lessons or spin wild conspiracy theories just yet, they want to connect us with the abstract ideas they’re making manifest, which is the aspect of their debut that pays the most dividends.

The biggest weakness of prior incarnations of The Magdalena, aside from the bikini battle armor was that everything occurred in a surreal demimonde of demons and shadowy cardinals that made it nearly impossible to connect with the character in a meaningful way. How Howard and Cady seem to address that limitation is by separating the world of the comic into the secular world that views evil as an abstract idea and the religious deep state that knows all too well evil can reach out and touch you.

It’s an outlook consistent with other occult driven series like Hellblazer with the distinction that The Magdalena builds that division along the lines of the structure of the Catholic church itself: the clergy and lay people. It’s a dynamic that also extends into the current Magdalena Patience and her protege Maya. Patience, struck by the possibility that at age 32 her powers are beginning to wane, begins the process of passing the torch to Maya, a teen girl with little faith in the church who nevertheless is able to wield the spear more effectively than Patience.

It also demonstrates how easy it really is for a sufficiently motivated creative team to make even the strangest premises into compelling stories of the kind that mainstream comics consistently struggle and fail to deliver. A heroine over the age of thirty that reads as such both visually and textually, a teen heroine with a female mentor, and a comic committed to exploring religious faith not named Ms. Marvel is a bingo card you aren’t going to fill up anywhere else right now and The Magdalena has served it up in a single issue.

Add in Christian DiBari’s kinetic, scratchy style that moves from the precise and visceral to murky and indistinct as needed, and you’ve got a promising debut. Especially when DiBari seems to be having the most fun making characters emote through their hair above and beyond their faces. Patience has by far the most active and emotional hair of the cast, swirling out around her and disappearing into the background when she’s the most in her element and hanging forlornly around her face when she’s downcast, but Maya’s bangs float and sharpen to points along with her moods too.

Where The Magdalena intends to go from here is anyone’s guess, but it already has the most important piece of the puzzle in place: heroines that reflect the world we live in and the women who read comics.