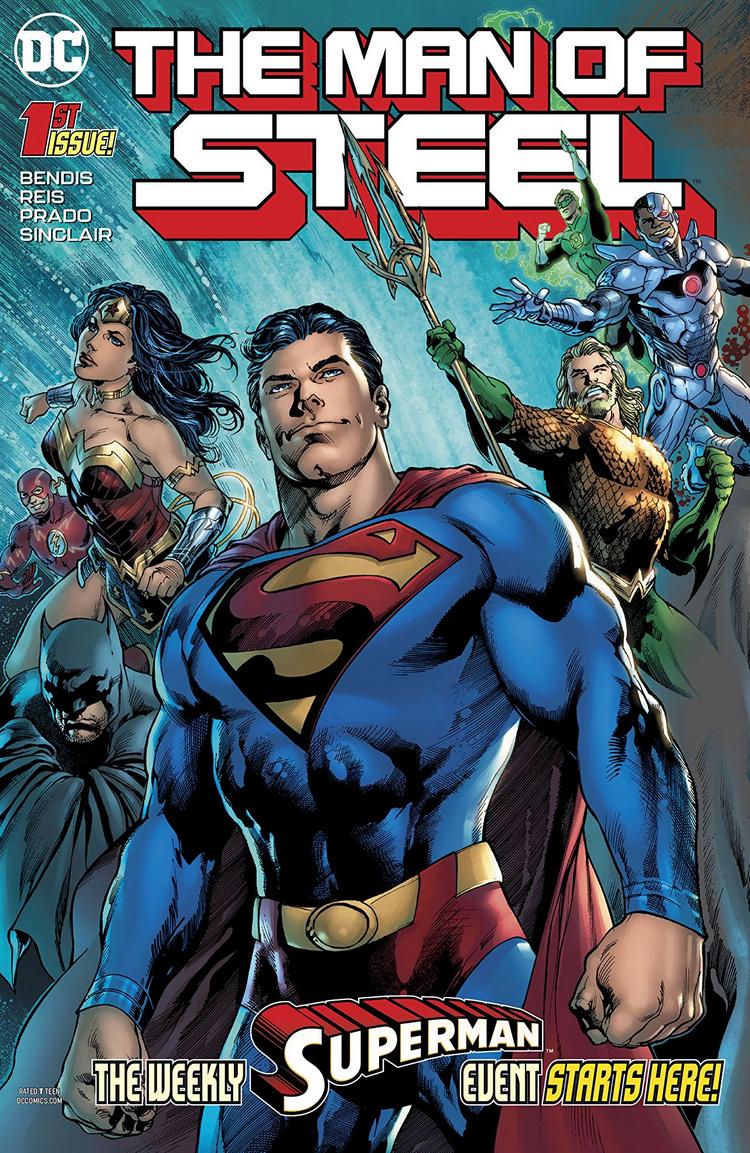 Superman is back. Of course, he wasn’t gone but there is something special about this issue that signals a return to something that was missing (and I don’t mean just his red trunks). Although we are presented with many classic facets to the mythos there is also a new twist to the story that we know and love. It’s too early to say whether it’s successful or not but it will be divisive to fans if nothing else. This issue by itself, though, is beautifully done and is the perfect start for a new creative team.

Brian Michael Bendis’ The Man Of Steel is more man than steel. This first issue tackles one of the major problems that many people both fictional and real-life claim to have with DC superheroes in general and Superman to be specific. A common complaint about the DC pantheon is that they are more like, and in some cases actual, gods that are unrelatable to us mere mortals. What about the life of a “god” can we find that mirrors our own? To counter this way of thinking The Man Of Steel #1 focuses on the human side of Kal-El instead of starting off with lots of super powered bravado. Yes, we do get to see Superman being super but Bendis brings the reader’s on “god’s” humanity. Through his thoughts and his dialogue with others we are exposed to moments that you or I might experience in any given day. We also see Superman being more than just a bunch of muscles pounding problems into a solution. We are presented with a thoughtful and deliberate man that is concerned with getting to the bottom of things. In some ways this is a new aspect to Kal-el that we haven’t or very rarely ever see. It’s understandable both from a creative and reader’s perspective. You have this cool character that has all these powers so of course you want to see and use them as often as possible. We see the same thing happen with Batman who was once known as the “World’s Greatest Detective” but now is the world greatest fighter. Bendis seems to have caught this and is working to deepen Superman’s character. This is absolutely how it should be, because without his humanity Superman becomes a very dangerous being.

Another aspect, besides the trunks, that seems to be brought back to Superman is the original Clark Kent. In recent years Clark has often times been indiscernible from Kal-el. The Clark in this issue though is more classic in the sense that he is meeker. His hair is slicked back and he seems to have a quieter tone. This is a good direction and place for Clark to be in: in public. Just as Christopher Reeves portrayed Clark versus Superman, this opposite façade just helps to sell that people don’t recognize him. Of course it wouldn’t be a debut issue of Superman without experiencing those moments that remind us that he is a super man. We get to experience some really cool visuals of him using his classic powers to prevent everyday disasters. We are also introduced to the newest villain to the Superman universe and a change to the mythos. Though we don’t find out the extent of the change quite yet it is always concerning when something like this is done. It is hard to say yet whether it is successful or not. Also, considering that something very similar to this was done recently in Action Comics the change being made here may not go over well. The introduction to this series, however, is fairly flawless. There is a strong feel of balance in the flow of the story and the first issue, of course, leaves you wanting more.

Just as the story wraps itself in Superman’s humanity Ivan Reis’ artwork also projects this mood. We are presented with a comforting classic representation of the Man of Steel. Yes, his trunks are back but it is more than that. Ivan Reis has captured Kal-El’s humanity perfectly in his line work and this is especially noticeable in the rendering of his face. There is a vulnerability to his facial features that keep him grounded and familiar. His eyes are friendly and his smile warm. He looks like a friend. Just as Superman is drawn friendly and approachable his new enemy is drawn equally vicious and deadly. It’s a perfect contrast to really give depth to both moods in this issue. There is also complexity to the scenes with the new villain that the reader’s eyes want to take in excitedly everything that is going on. Whereas the scenes with Superman are full of the tenderness, innocence and wonder. Joe Prado does an excellent job on the inks for Reis’ art and maintains the feelings of both complexity for the foe and humanity for Superman.  The last couple of pages of the issue are drawn and inked by Jason Fabok and he, as always, gives the characters a feeling of epic-ness. The lines are clean, sharp, and powerful and bring in an appropriate complexity that these characters deserve. The switch leads into something big happening over the next issues and it is done very well.

Alex Sinclair does a beautiful job on the colors for The Man Of Steel. For scenes with Superman and Earth he uses lots of bright colors that have an organic tone to them. It again communicates the message of Superman’s humanity. Scenes with the new bad guy are very cold and almost metallic feel to them. Rendering of the lighting looks beautiful throughout and give the scenes an added depth to them. There are a few scenes with fire in them that are particularly beautifully down. Cory Petit takes care of the lettering for this issue and does a great job. The text flows very smoothly and very easy to read. It keeps the reader in the story and in the world that the rest of the creative team works so hard to create.

Overall as a single issue, The Man Of Steel #1 is a success. It is the first step in the right direction by Bendis and shows that he has an excellent understanding of the property he is working on. Instead of trying to do something cool and flashy he is reinforcing what many may have forgotten about Superman. It is Superman’s humanity that makes him the hero that he has become.