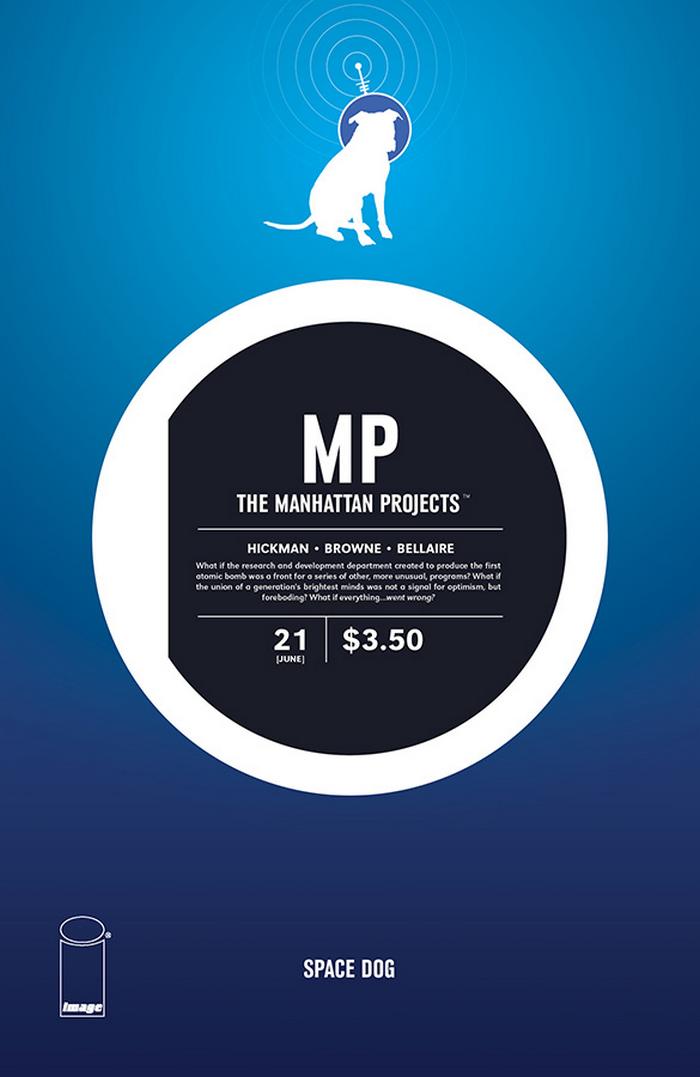 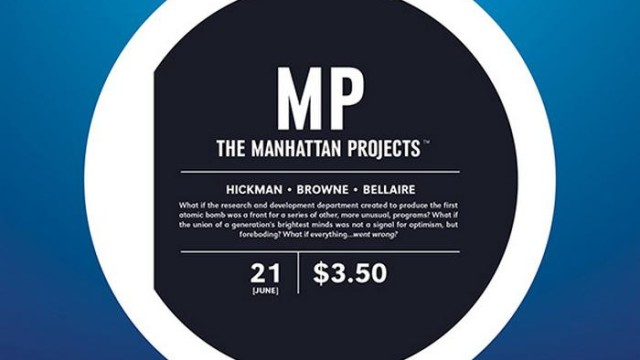 After experiencing a month delay, the unconventionally twisted brainchild from creators Jonathan Hickman and Nick Pitarra known as The Manhattan Projects finally returns. For this issue, artist Ryan Browne takes the helm on art duties as the story takes a detour from its usual, maniacal exploits of scientists and their survival in (and out of) alternate realities to indulge curious fans on the whereabouts of Laika –the talking, machine gun-wielding, cosmonaut dog.

When last we left Laika, she was forcibly tasked with the responsibility of outer space exploration. This was at the behest of her comrade and fellow Russian cosmonaut, Yuri Gagarin –who has a very deep appreciation for Laika that openly borders on inappropriate. If you’re familiar with your Russian events from the 1950’s and 1960’s, these names may seem familiar to you because these characters are fictional representations of their respective names in history. If you’re familiar with the comic book The Manhattan Projects, then you’re well aware of these fictional representations push the limits of about as far as fictional representations can go –not unlike experiencing an acid trip while a drunk, bitter history professor and a evil, robotic version of Neil De Grasse Tyson simultaneously tell you the story of mankind.

Jonathan Hickman obliges readers for this issue by unabashedly telling a story where Laika, the space dog, is captured by an alien species of scientists. It’s your basic science-fiction, space captive, style of story, but still told with that modern surreal and self-awareness gag that we’ve come to expect from this series. Hickman introduces us more fun and new characters to expand the repertoire of players at his disposal. We get a glimpse of the over-confidence and arrogance of alien scientists of the Sionnu Science Union, as well as a counter species of villainous alien conquerers known as the D’hri. There is humor and sardonicisms peppered throughout the book. This is evident in Laika’s cell mates and reluctant allies, UNa and Rys. UNa is a droid that specializes in espionage, infiltration, and lying and Rys is reincarnated space twins that can only communicate via the word “Blarg!” There’s an obvious comedy about this combination of characters and it’s sure to continue the tradition of violence, betrayal, and humor in The Manhattan Projects.

What helps with the art for this book is that artist Ryan Browne has been a regular back-up for this series and he shares some small aesthetics with main artist Nick Pitarra. He’s able to sustain the ambiance and feeling that was established in The Manhattan Projects and still maintains a style entirely his own. Browne’s detail in panels isn’t skimped as he intelligently renders a translucent prison cells stacked on top of each other, while effectively maintaining perspective and keeping the aliens in the background relevant and interesting. The premise and his style feature heavy inks that make it seem cartoonish, but the details within those heavy borderline are what bring the expression and seriousness to the panels. Colorist Jordie Bellaire showcases her coloring talents in revealing panels and successfully balances and holds together the consistencies in panels. Even with the challenge of absurd characters being held captive within yellow or pink diaphanous walls, the physics and nuances are admirably sustained.

After all is said and done, we have a comic book that chronicles a quick and fun space adventure. Fans of The Manhattan Projects, will be enriched as we follow the exploits of Laika –the space dog that made an impression by talking, firing machine guns, and pissing on their enemies –and there’s a surprise at the end that makes you wonder where the hell Jonathan Hickman is going to take plot line. New readers could pick this issue up as a one-shot and still get substantial enjoyment from it. This issue and story doesn’t try to pioneer any new story-telling techniques or wear you down with overbearing character sentiment. What it does do is offer boisterous entertainment. If you’re into zany, science fiction then this series will always be your bread and butter.