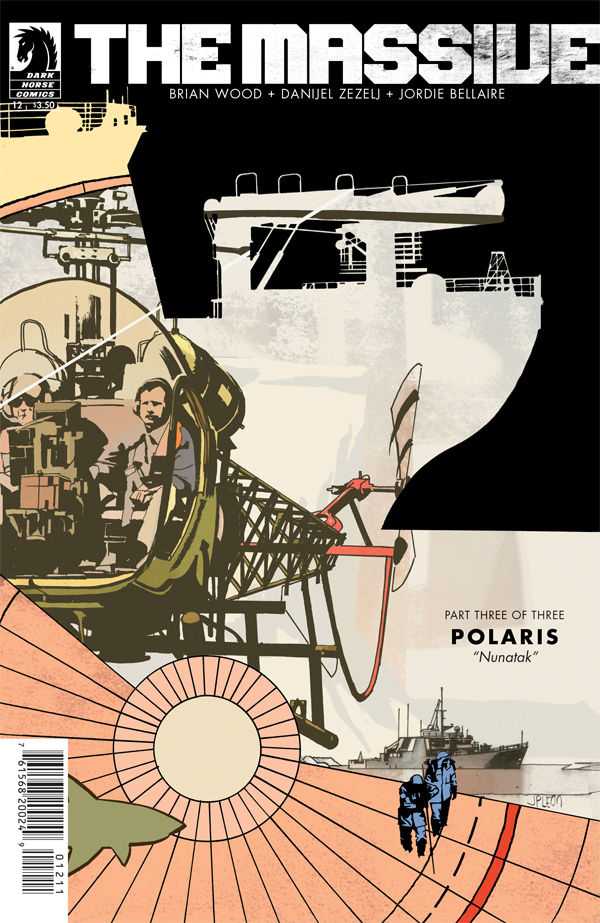 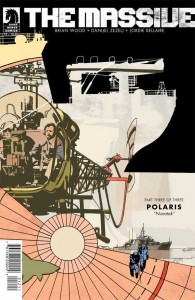 The Kapital heads all the way north in search of her sister ship The Massive, as reality begins to set in for Callum and the crew about the futility of their mission. As things seem to be at their most desperate, we learn about the specific path Cal took to get to his current state, and how much of himself he lost along the way. The past, like the ice of their surroundings, is closing in and threatens to sink everyone into oblivion.

For a series that’s to date been so much about mystery — from the missing ship, to the crew, to that of the Crash itself — issue #12 seems to collapse in on itself (in a good way, mind you) through revelation. We get Wood’s straightforward delivery of Cal’s time in the Middle East, working as private security, instigating violence, as at least one obscure history is finally laid bare. However, it’s not just the narrative as a whole that finally buckles poignantly under the weight of suspended silence, but we get to see Cal reach his physical and mental breaking point in quite possibly the most barren place on earth: The North Pole. It’s a beautifully frightening metaphor for a mission the team continues to relentlessly pursue, following a phantom into desolation until the world itself rises up to crush the life and spirit out of those foolish enough to stay on track.

Not everyone is as destroyed as Cal, although not nearly as many crew members still remain after #10’s grand exodus. Those that do, however, come together to literally dig out of the danger Cal has put them through. His retreat seems sudden, but that’s a fair reflection of how quickly life can wear through a person under both extreme leadership pressure and the pain of a physical deterioration. What Wood begins to set in motion, though, is a real sense of Mary’s takeover, and it makes me wonder how much trust I should be placing in her. Call me paranoid, but her motivations clearly remain a mystery greater than Cal’s history ever was, and I have to question how much of their current situation was no accident after all.

Danijel Zezelj comes on for a single issue stint here with a very different style of inking than we’re used to seeing in the series. Much heavier with a greater emphasis on contrast than previous series artists, Zezelj’s work seems tailor-made for a story set in the Arctic, where detail is not as critical as depicting a true sense of isolation amongst the snow and ice. His double page spread of Cal walking away from the Kapital is glourious in its simplicity, but overall, I’m not sure how well his work fits in with the other artists in the series. Once collected, this issue may feel somewhat out of place. While it seems to mesh stylistically with the more revelatory narrative, the overall illustration of #12 feels a little awkward by comparison to the usual thinner, more controlled line of the previous 11 issues.

Overall, The Massive #12 gives us a lot of information, but definitely steps away from previous issues in tone and content. Only 40% through the complete story, we seem to have reached an end to the first act where some books would be wrapping up in their entirety. Full of plenty more mysteries to come, The Massive appears ready to take another turn next issue, as the team arrives in New York, and where that leads them emotionally is anyone’s guess. I for one am eager to find out.