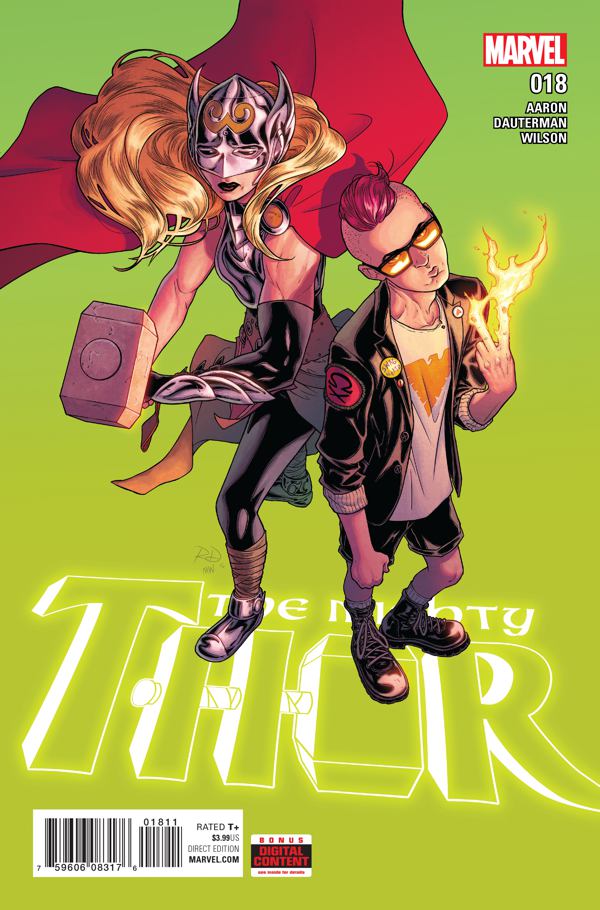 Smooth move, Shi’ar gods. Releasing the goddamn Phoenix? Yeah, that’s real smart. Cause that’s gone so well in the past….but there’s a new wrench in the mix the spiteful gods didn’t count on: the ever surly Quentin Quire.

I loved this comic. I loved every freakin’ page of this comic. Jason Aaron still has his Quentin Quire mojo and I can say, without hesitation, that I have never read a better take on the Asgardians than his throughout this epic Thor run. I don’t just mean Thor, the banter between Sif and Cul is fabulous, and when you throw the Shi’ar gods into the mix….it’s just freakin’ awesome. Jason Aaron’s writing is on point (can you tell I’m running out of ways to say it’s good?) I’m telling you, and I know you’re listening, The Mighty Thor #18 is as good as comics get.

So, we’ve established that Jason Aaron can write. Russell Dauterman and Matt Wilson can art the ever loving hell out of whatever story they are looking to tell. Dauterman is, simply, one of the best artists in comics and the way he captures the arrogance of the Shi’ar gods, and the surly, utterly unique personality of Quentin Quire is phenomenal. He tackles massive, sprawling brawls in the cosmos, the Phoenix is blazing and amazing and the moments with Quentin chilling with Krakoa are as impressive as any others. Dauterman is a modern day master, and his work is worth the price of admission on its own.

Matt Wilson’s colour work is as exceptional as ever, taking Dauterman’s pencils and electrifying them. The art leaps from the page, and where the Phoenix is involved…oh my god. I’m in awe of his work with each issue that has his name on it, and The Mighty Thor #18 is no exception.

The Mighty Thor #18 takes what has been a fantastic story and blows it up to an even bigger tale with huge consequences and even more fun than ever. Quentin Quire + Asgard = win.