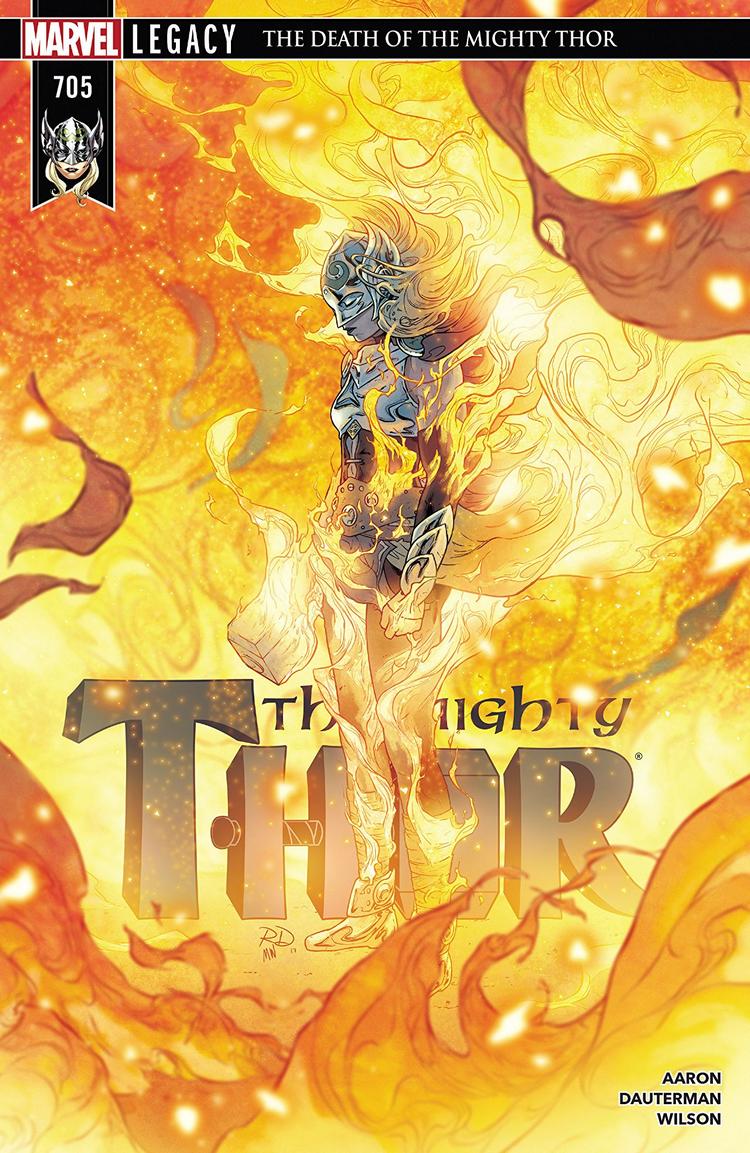 Jane. The Hammer. Mangog. The death of all Gods. Destruction. Mayhem. She picked up Mjolnir. We all know where this is going.

…and it fucking hurts.

Jason Aaron, Russell Dauterman and Matt Wilson continue to execute their brilliant tale, putting readers hearts through the ringer as they bring the greatest Thor story ever told to a conclusion. While this issue does not give readers a true finale to the tale of Jane, it slams us with a never ending assault of thunderous blows to the soul not unlike the Mangog unleashing upon Asgardians.

The action in this issue is intense. Dauterman and Wilson capture the fury and power of the Mangog in a way that left me awestruck. The Hulk knows nothing about rage. Imagine the most intense, angry character you have ever seen….they are nothing compared to this Mangog. In this story of She Who Be Worthy, Thor has gone toe-to-toe with Shi’ar Gods, the Phoenix and countless other foes, but Dauterman and Wilson found a way to make Mangog reasonably outclass everything. I actually buy this God-killer being able to push Thor to limits nobody has been able to push her to up to this point. In a sense, they’ve managed to literally outdo themselves, all the way to the penultimate chapter of this tale. Their work is, in a word, brilliant.

That Jason Aaron guy doesn’t suck, either. He is fully cognizant of what is happening here. He gives readers the biggest brawl we’ve seen yet, but he is also fully aware that he’s bringing home one of the most powerful stories he’s ever written, and that’s saying something. He brings humour into this issue to diffuse the pain, and he gives Jane some absolutely amazing moments that capture everything a God of Thunder should be. Aaron had me on the edge of my seat for every damn panel of this comic, and despite the pain I know will be inflicted upon me with the next issue, in Aaron I trust so I will soldier on.

The Mighty Thor #705 is a damn good chapter to transition into the finale of Jane’s story. It hit me like a Mjolnir in the feels, and I kind of hate the creative team for that, but I also have to thank them for crafting the greatest Thor story ever told (thus far, I’ve still got a #706 to read). If you haven’t been reading this thunderous epic, go find the trades/hardcovers/singles and prepare yourself to experience an adventure that is the pinnacle of what superhero comics can be.