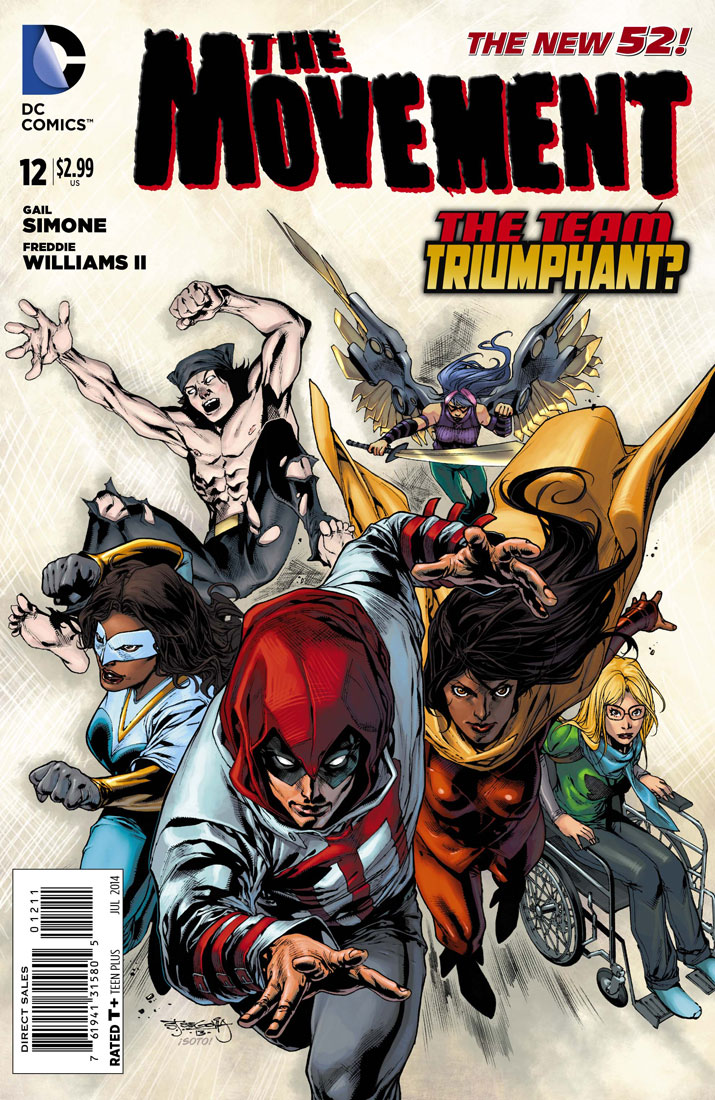 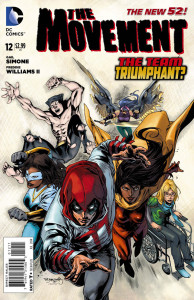 Diversity is a funny thing. A lot of fans talk about it, pro and con, as strictly a numbers game. How many black teen heroines are there in the DC Universe? Is that new super-team 50/50 male/female? Better? Worse? And there’s nothing wrong with those questions. They are a gut check for starting a conversation that needs to be second nature if we are going to see the genre we love grow into something that reflects its readers and the world at large in a more significant way.

But, there is a deeper level of engagement necessary in comic book narrative to defend against arguments of tokenism (nothing drives me more crazy) and to keep the reader interested. It’s not enough to have LGBT characters. Those characters need to have unique stories that speak to the plurality (not just diversity) of how we live our lives.

And The Movement has been a master class in that development.

That #12 is the series’ last issue is a conundrum I will reserve for another time. Suffice to say, the sales weren’t there, but the quality of work and support of the publisher certainly was. What this series’ creators did better than any other in recent memory is create a group of characters out of whole cloth that didn’t rely on membership in the Bat-family or having a “JL” in front of their name. And those characters had deeply unique backgrounds to shore up their surface identities, detailed across the series with Virtue taking the spotlight in this issue.

It doesn’t hurt that Virtue is my favorite character on the team, of course. Brash and confident, but with a deep well of compassion driving her motivations, Virtue was the character I immediately latched onto from issue #1 onward. Simone’s history for the team leader, involving Holly knowing she was gay from a very early age, resonates deeply with me, as someone who knew that about himself even younger than 10, but didn’t have the confidence Virtue did to accept myself. There is no coming out story here, in contrast to Burden’s growth path throughout the series, and that’s part of what makes this book so compelling. Every character is treated individually, letting their histories build their character (and not the other way around), and it is a testament to Simone’s deft commitment to character (not even just diversity) that it is so.

Freddie Williams started this series with art I didn’t love, but liked well enough and could see the strong match of a scratchier style to a concept that needed that sort of raw rendering to work. By #12, I can’t help but marvel at every page, particularly the glorious two page spread and full page team shot that begin this issue (seen in the preview exclusive to Comicosity) and grow out of Virtue’s imagination. This is not just The Movement’s potential as a team idealized in their leader’s head, but the group’s ultimate potential in the minds of readers. It’s time for new heroes to stand up and be counted among the luminaries of the DC Universe, and the foundation Williams and Simone has laid gives these characters a fighting chance to be that new wave.

Last issues are always sad, and second guessing about what could have made a difference for a title is natural. But I’d rather focus on what’s next for these characters, and where their unique potential and deep construction will lead in the coming years. If you loved The Movement like I did, stay vocal. Ask about Virtue at conventions. Cosplay as Burden at events. Tumble your feels about Mouse and his love for cheese. Or Margaret. Or Tremor. Or dirt.

Let these characters into your heart and demand they show back up on the page. Too much work has gone into them to see them fade away, and to that point, I’m not sure they could anyway. They will be demanding a presence for themselves — that’s how well they were built.

If you haven’t picked up The Movement #12 yet, head over and check out our exclusive preview. Then run to your store or Comixology! You won’t be sorry.