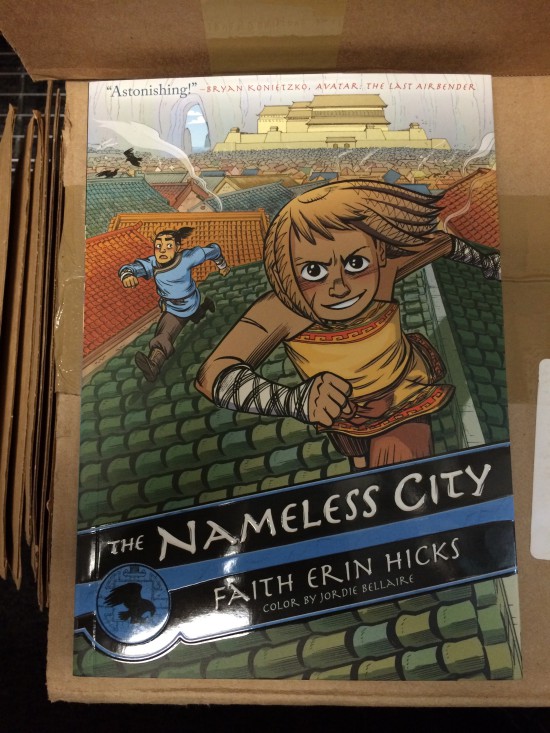 The Nameless City is the first volume in a series focusing on two youths from very different backgrounds living in an economically strategic city that has been conquered countless times during its existence. Readers see the city, the major players and politics of the area through two main characters, Rat & Kaidu. These charming characters will grab your attention and keep it, and Hicks does a masterful job with them.

Kaidu is a fish out of water, coming to the city to be trained as a soldier for the current rulers of the city, the Dao. His father is a General but violence & training are not his forte, which brings him in contact with Rat. A homeless orphan who is native to the city, Rat is a character full of spunk and attitude, the right amount of moxie that you just can’t help but root for her. The differences between the two make their relationship work, and their interactions and races are some of the highlights of the volume. Hicks does a great job of keeping both characters strong while highlighting how naive they are in some ways. Both characters are intelligent, but their pasts and headstrong natures get them in trouble sometimes. The trouble is very entertaining, and both of these characters are filled with an amazing amount of energy and life.

Hicks builds her two primary characters very well and also plants the seeds for some very strong characters around them. The Nameless City itself is a character that she builds well, it’s perseverance and vastness on display at all times. I found myself wanting to see more of this majestic city with every page and by the end of the volume I found myself revisiting several parts just to see the metropolis Hicks has built. How the setting continues to grow as the volumes in this series progress will surely be a big part of the story going forward, and I can’t wait to see more of this Nameless City.

Hicks’ artwork is phenomenal through the entire volume. Her characters are expressive and energetic, their brilliant personalities brought to life well by her vivid pencil work. The world of The Nameless City is immersive and enchanting, with the city bustling with a unique energy from the detailed pencils that you can’t help but fall into. You can feel the commotion of daily life in these pages and the characters fit into this world perfectly. Hicks captures the awkwardness of these kids well, at times showing their uncertainties very well through their facial expressions alone. She knows how to time an action sequence well, letting her artwork tell the tale and letting the action breathe when it needs to, utilizing the format of an original graphic novel well.

Hicks’ pencils are coloured by colourist extraordinaire Jordie Bellaire and her brilliant work rounds out the artwork perfectly. The palette she works with enriches the pencils so well, bringing a vibrance to the artwork when needed, and a grounding feeling at other points. I’ve said often of her work on The Autumnlands that she elevates good pencil work to a new level and the same is true about her work on The Nameless City. This is, simply, flawless colour work by a modern master.

The collected format is a smaller, almost digest-sized trade paperback that is often associated with “young adult” graphic novels. While The Nameless City is definitely in the YA wheelhouse, I’d argue it’s really a YA+ book, with the “+” being anyone who likes a good story. It’s been a long time since I was considered “YA” and I enjoyed this story immensely and I’ll be waiting with baited breath to get my hands on volume 2. The print quality of this volume is excellent, which will not be surprise to anyone who has read any First Second books in the past, and it is a great tome to have on your bookshelf.

The Nameless City is a fantastic read that I heartily recommend to anyone who likes a well told story featuring a diverse cast and strong, well crafted lead characters. Rat will be a favourite of many readers immediately after they meet her, and I can’t wait to see where Faith Erin Hicks is taking this story. This first volume is perfectly crafted and I can’t wait to see what she has in store for this world going forward.