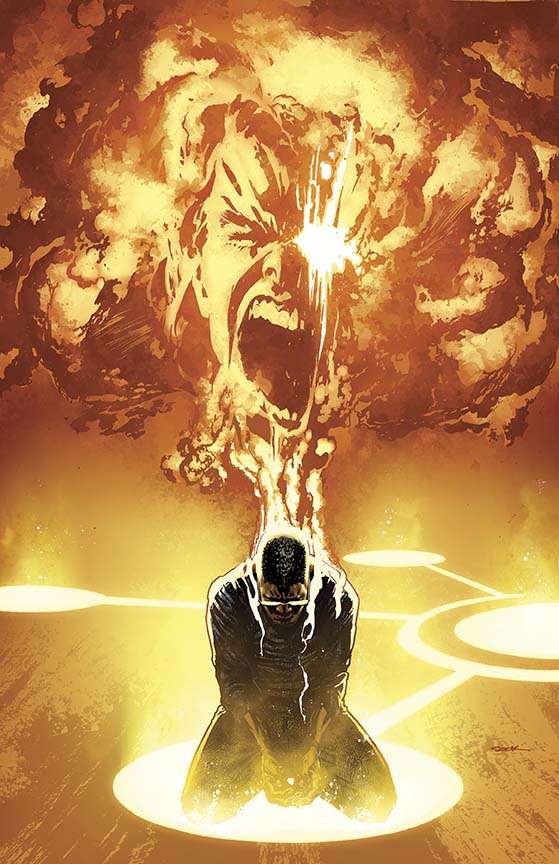 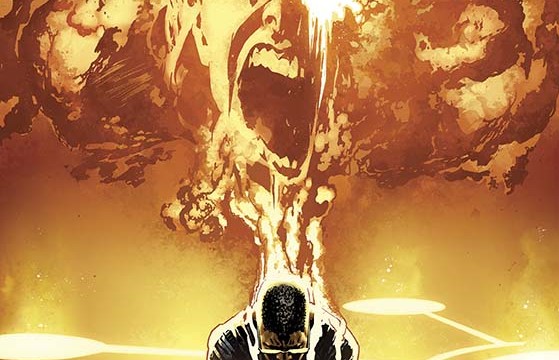 TerrifiTech launches a revolutionary new product, the future of Firestorm is in jeopardy, and a new ominous threat looms in Futures End #5.

The writing team continues to keep a ton of balls in play in this series, with this issue checking in on the Grifter situation, advances at TerrifiTech, and the status of Firestorm. Grifter’s status has taken an interesting turn in this series, and that is one of the strongest storylines in this issue. The current confusion as to whether or not Grifter is on a crusade or just a maniacal serial killer adds a great dynamic to his character. This is definitely the most interesting Grifter has been in the New 52 and I find myself curious about what is happening to him in this storyline. That alone is a win for the writing team as up to this point if Grifter had vanished forever I never would have noticed. In this issue readers get the equivalent of an Apple launch event from TerrifiTech, a storyline that paled in comparison to the rest of the issue. Like a hollow launch event, TerrifiTech’s announcement really did nothing to pique my interest and the status quo is maintained for this version of Mister Terrific in this issue. This issue features the brewing conflict between Ronnie and Jason, and I found Firestorm to be better served by the characters not uniting to create the powerhouse. The torment of Jason within the Firestorm matrix had gone on long enough and it was refreshing to read the end of it. The writing team brings a new element into play near the end of the issue, though I do worry there may be too many plot lines going on at once to get much payoff from any of them. This issue is lacking any involvement from Red Robin, Terry McGinnis, Frankenstein and other players that are intriguing, which makes the addition of yet another plotline feel like there is too much going on here. Weekly releases can be dynamic due to their release schedule, but if it takes more than two weeks to circle back on any storyline the power of the release schedule is a moot point. This issue is a solid example of how the right storylines make an issue pop, and Futures End #5 definitely could have used some Terry McGinnis to light a spark in these pages.

Jesus Merino is on art duties, providing consistent, yet generic, artwork in this issue. His pencils are not poor, per se, but there is no flash in this issue. These pages tell the story adequately, but this issue is lacking big reveals and any jaw-dropping moments. Suspenseful reveals don’t hit maximum impact this issue, but Merino’s work does not hinder the story. This is very average work from Merino that fits the style of Futures End crew thus far, and while it isn’t the best artwork in the series that we’ve seen, it is far from the worst as well. Merino’s work shows potential, and as the series ramps up he definitely could be a strong member of this art stable.

The New 52: Futures End #5 is one of the slower issues in the series so far, but the writing maintains it’s strength. New story angles are introduced while others become more complex and while the artwork isn’t jaw dropping, the storylines do progress in this issue. A different blend of storylines may make for more dynamic issues down the road but issue #5 does an adequate job of moving the story along while giving readers who are interested in these particular arcs some more to chew on.