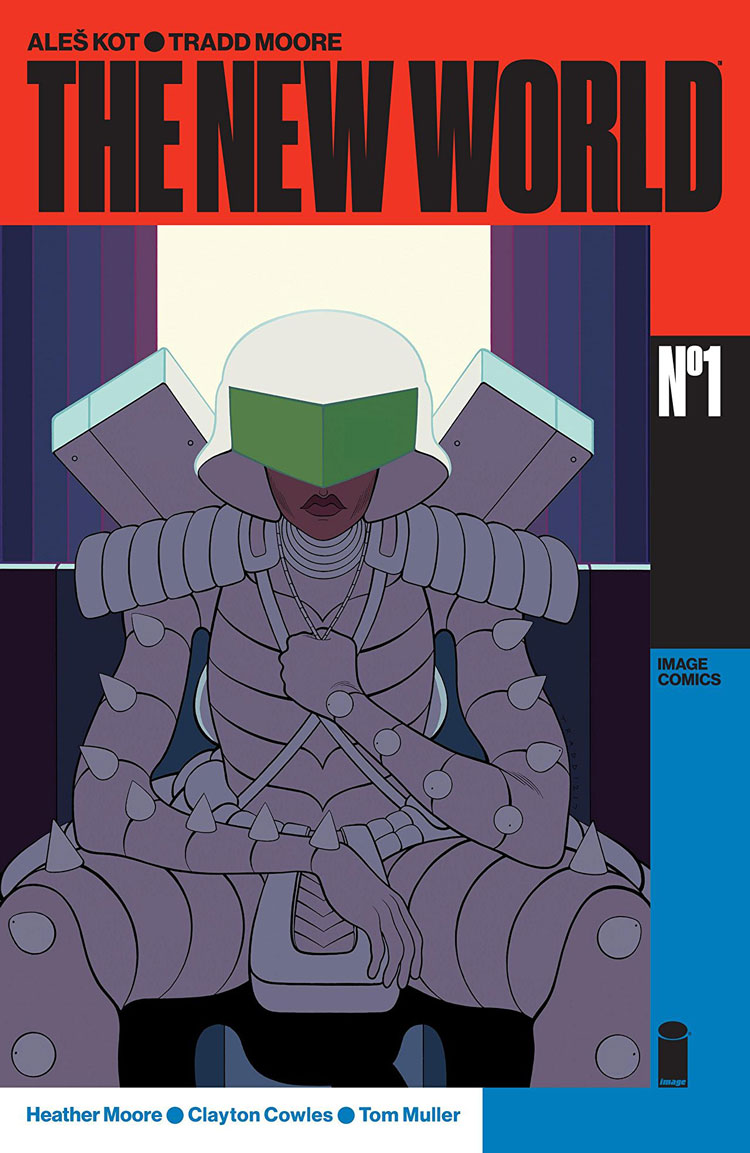 The most representative sequence of Ales Kot and Tradd Moore’s new day-glo dystopian work The New World arrives about two thirds of the way through the first issue. Kirby Shakaku Miyazaki, the “gluten-free militant atheist” protagonist of the comic, saunters up to the bar at a trippy New California club. The bartender asks him if he wants a drink and Miyazaki can’t help but declare he’s straight edge. “Good for you, dipshit! A ‘no’ would have done just fine!”

Like its kombucha-chugging technoanarchist terrorist hero, The New World has a lot of style and charm, but at every turn, Kot seemingly can’t help himself from sabotaging it. Every single dialogue exchange is twisted into a never-ending run of hamfisted soapbox rants where each character lays out exactly who they are, what they consume, and what they hate. Where a “no” would have done just fine, The New World’s population lecture and verbally contort themselves — and not because it makes sense for their characters, but out of some admiration for how hip and knowing the narrative can be. Or as Miyazaki’s dad embarrassingly puts it when asking if he has been on a date with a girl or a boy lately “I’m a progressive dad, you know I don’t care.”

For longtime detractors of Kot’s work, The New World must seem like a gift, an ideal distillation of all the writer’s habits, from the barrage of references to whatever Wired covered last year to the clumsy monologuing to the conversations that only exist to hit you over the head with progressivism (it’s not just Miyazaki’s dad who asks if he’s dating a girl or ::wink wink:: a boy yet and points out how open minded they are, it’s more or less everyone he encounters). Which is a pity because Kot’s collaborators have otherwise created one of the most entrancing and appealing visual works to hit comics in quite some time.

Kot’s rough concept is admittedly nothing special: in the near future, five American metropolitan regions are wiped out by nukes and no one knows how or why it happened, but it propels the country towards civil war and invasion. In the aftermath, only The New California pulls its shit together, and in part only because of the success of things like a reality show called “The Guardians,” where stars, such as New California royalty Stella Maris, hunt down enemies of the state and let viewers determine whether they live to stand trial or get “erased.”

There’s a bit of the recent Black Mask series Calexit in The New World’s DNA, and a lot more Scout, and Kot tries to switch it up by grafting on elements of The Running Man (the film, unfortunately, rather than the far more Ballardian novel) and William Gibson’s cyberpunk novels. But the lack of originality in the narrative is almost made up for by Moore’s career best art.

While Kot does his best to cram every panel full of dialogue that borders self-parody, Tradd Moore, colorist Heather Moore, flatter Yesflat, and letterer Clayton Cowles set about constructing the most gonzo reimagining of LA since Kathryn Bigelow’s Strange Days. Though Bigelow’s work stuck to her then patent urban grime palette, The New World is a vision of LA projected straight from the MDMA saturated floor of The Hacienda at its late ‘80s peak, with designer Tom Muller even bringing a decidedly Pete Saville aesthetic to the layout.

Admirably, The New World aesthetically strives not to be yet another Blade Runner-indebted dystopia but something refreshingly vivacious, the kind of kaleidoscopic, drug-fueled refusal to recognize harsh reality you’d expect hip Americans to indulge in rather than the po-faced stoic blockading books and film and tv usually foist upon us.

That mania-in-the-face-of-certain-doom quality goes far beyond just the backgrounds and details, too. The Moores bring it to Miyazaki and romantic and criminal foil Stella Maris’ costumes — both while at “work” and at play. On “The Guardians,” Maris is a future shock cop, a cybersamurai clad all in white. Off the job, she’s Grace Jones on the serengeti, decked out in Ndebele neck rings and face paint. Miyazaki’s actual job is up for debate but his wardrobe reflects the anarchy of his beliefs, a mish-mosh of ironic patriotism and fluorescent Madchester bagginess.

The designs don’t avoid the influence of super-hero attire, but what matters more is that they’re open to other influences, like samurai armor and Vivienne Westwood and Suicide’s dalliance with freak Americana. And they move with the grace of the free flow of ideas, too. My god, how they move, in the shoot-outs and the stabbings and the moments where they are just bodies together on a bike, on a couch, on a dance floor, living their days the best that they can underneath the nuclear haze.

Yet whatever magic the Moores are channeling to visually bring these characters to such intense life, Kot’s writing has acquired none of it. On some level, Kot must recognize the story he has written is a brazen pastiche of the influences he has peppered throughout his works — the main character is named Kirby Miyazaki, for chrissakes — so he leans into the platforming his detractors always claim his work is solely comprised of while retaining none of the heart or humanity that those same detractors always overlook in Kot’s best material, such as Change, itself an LA love letter of sorts.

Were the writer to restrain his performative impulses and let his visual collaborators just do their fucking thing, The New World could easily propel itself into the pantheon of vital Californian dystopias like Tupac’s “California Love,” the first two Fallout games and — dare I say it? — Demolition Man. But instead what Kot delivers is the dystopian reimagining of Johnny Rotten’s infamous California stage banter “Ever get the feeling you’ve been cheated?” in that it feels like self-sabotage.

Of course, Rotten came back stronger with Public Image Ltd, so maybe Kot’s on to something after all.