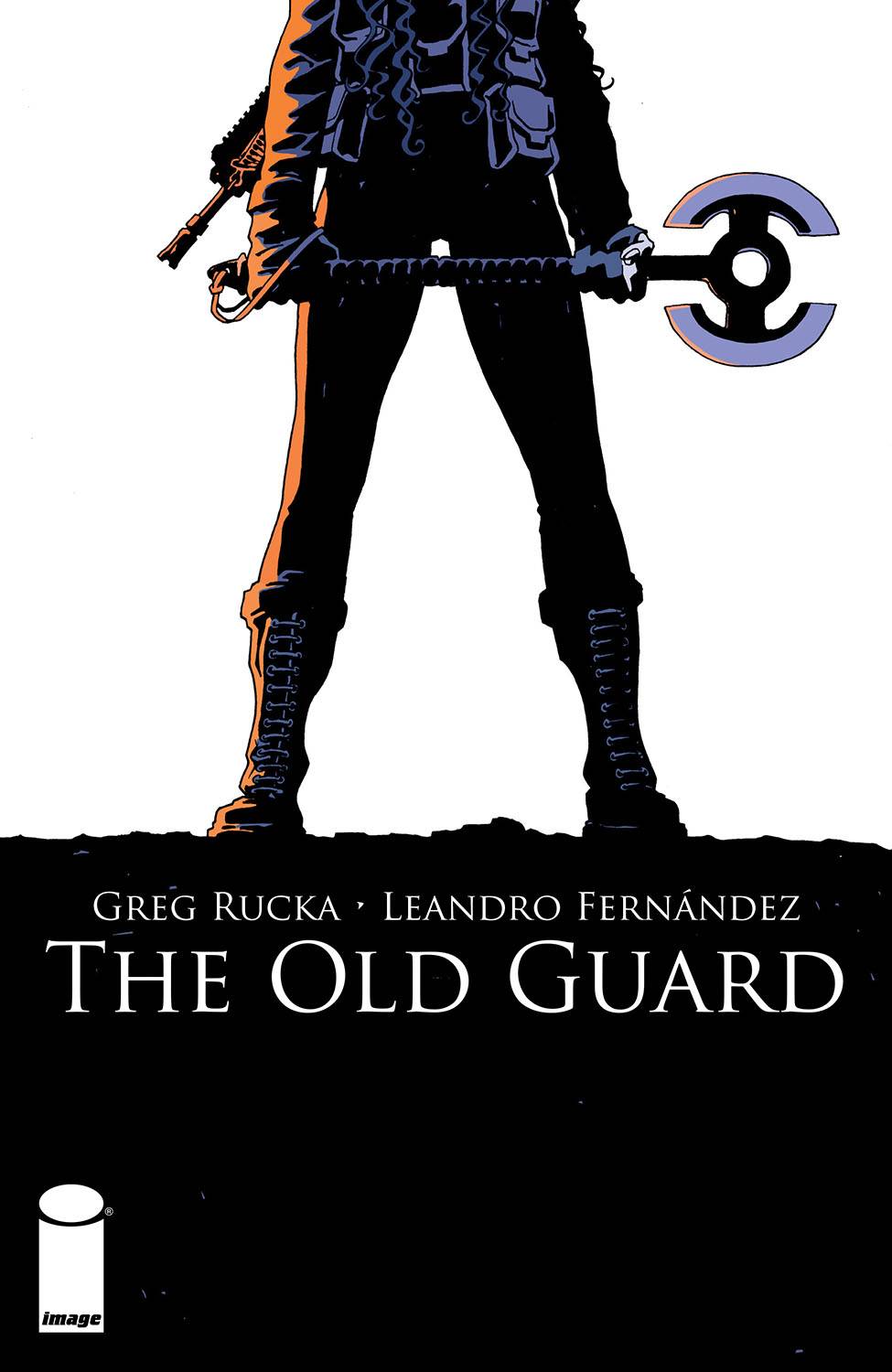 Writer Greg Rucka brings along artist Leandro Fernández to give readers another visceral visual explosion in The Old Guard #1. It opens with the following:

“This is a fairy tale of blood and bullets.”

The creative duo, with Daniela Miwa on colors and letters from Jodi Wynne deliver on the blood and bullets, so much so that at one point, the background for an entire page is sound effects depicting a firefight: “TCHOOM!”, “CHK-CHK”, “BANG! BANG! BANG!”, “ZAPZAPZAP”, ”CRACK!”, ”BANG!”, ”BOOM!” and more.

As a result of that battle, Rucka, Fernández, Miwa, and Wynne introduce us – truly introduce the readers – to Andy, Nicky, Joe, and Booker. A side trip through a scene in Afghanistan brings in another player, and an antagonist is given panel time early, defining the world and everything readers need to know to move forward.

Part video game, part fantasy, part mythology, The Old Guard #1 is filled with violence, sex, deceit, war, and all the emotional turmoil that accompanies that gamut. Rucka gives readers a fully developed world, and slowly exposes connections, personalities, and conflicts as fits his plan. He doesn’t rush any exposition, nor does he linger on any one point in this thirty-six-page epic debut. As a matter of fact, between Rucka’s pacing and Fernández’s storytelling, I had to go back and double-check that this was, indeed, longer than today’s standard comic.

This comic is not for the squeamish or the easily offended. With scenes in Afghanistan, Paris, Barcelona, and the South Sudan, a body count in the dozens (hundreds?) and a healthy dose of swearing, Rucka and Fernández are carving a new legend. Battleaxes, swords, and guns. Beheadings, disembowelments, and headshots. There is no measure of violence not shown, but Rucka makes it all work in the theater of war. Andy and crew are fighting for what they believe is right, and God help whoever gets in their way.

And that terror and carnage is at least partially why Fernández describes every scene with heavy shadow and Miwa favors pastels and brighter Art Nouveau favored tones. There are plenty of bold, saturated tones too, but in a comic filled with war, pale yellows and oranges seafoam green and magenta aren’t the most expected hues. But Miwa makes them work, augmenting the harsh shadows and playing along nicely with the more experimental fades Fernández uses throughout The Old Guard #1.

Jodi Wynne makes the lettering sing in this comic. From the aforementioned sound effects background (which may be just as attributable to Fernández as Wynne) to Andy’s opening lament, each scene requires its own treatment and gets exactly that. The Afghanistan raid, however, takes it all a step further, visually describing the change in languages without any unnecessary “translated from. . .” or parenthetical dialog. Mixed case works nicely, giving The Old Guard #1 less of a “traditional” comic book appearance.

Since I discovered his writing in the No Man’s Land novel adaptation of the Batman saga by the same name, Greg Rucka has been a must-read for me. Occasionally, time or financial budget has precluded me from getting everything (looking at you, Lazarus, but that gives me one for 52 in 52 later), but I have read and enjoyed more of his work than not.

The Old Guard is a bizarre mix of his Wonder Woman work, with his Jad Bell tales, and smatterings of early Atticus Kodiak. It’s not even by any means, nor does it stop with that approximation, but that’s the best way I can describe The Old Guard to Rucka readers. What might be better still, is if you just sample it for yourself. Rucka, Fernández, Miwa, and Wynne are already giving you one hell of a bargain by today’s standards for page count alone, but the story in The Old Guard #1 is darn near priceless.