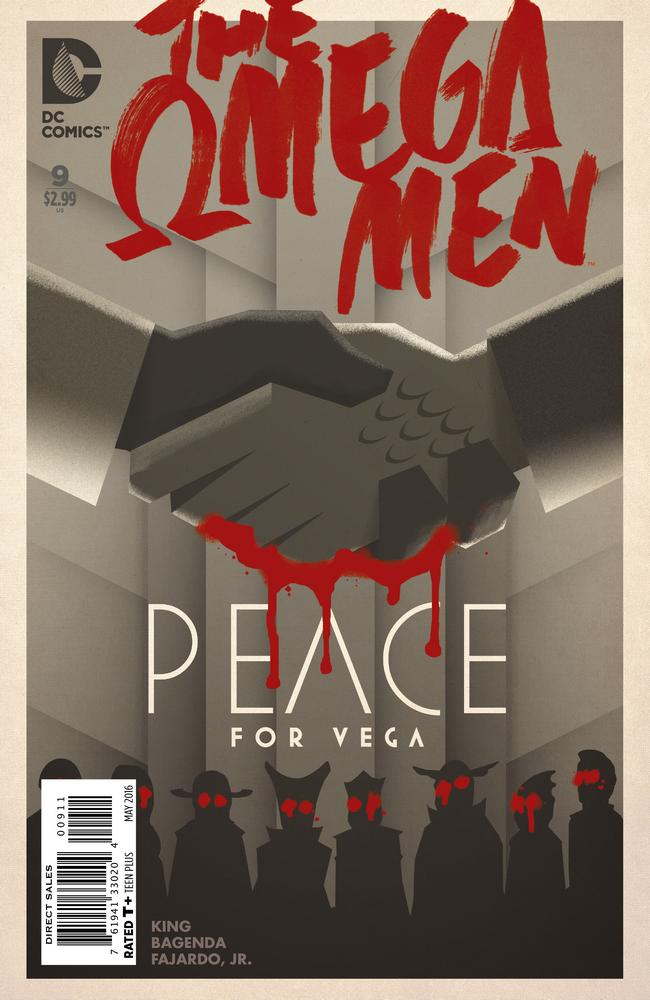 The saga of The Omega Men is coming to a head as King, Bagenda and Fajardo continue to take this title in directions that are unpredictable and fun.

King’s work on this series has been masterful thus far and that continues with issue #9. The conflict comes to a head here, with Kyle delivering a speech that precedes all kinds of anarchy, leading to one of the more intriguing moments for Kyle Rayner that I have read in quite a long time. What impresses me most about King’s scripts for this series is the skill with which he paces these stories. Like someone with an intriguing speech cadence that grabs your ear, King’s slow burn storytelling style with Omega Men is so different from most Big Two comics that I can’t help but be drawn further into this world. The lack of obvious, clear cut “good vs. bad” and the ever present question of “what the hell is exactly happening here” makes this series dynamic and entertaining and as some answers start to unfold and mysteries are revealed it is only getting better. King’s dialogue work in this issue is exceptional and DC made a damn smart move locking this skilled storyteller down with an exclusive contract.

Barnaby Bagenda and Romulo Fajardo Jr. are integral to the unique look and feel of this world of the Omega Men, and they are responsible for a huge amount of the unique pacing I mentioned earlier, as well. Their work is brooding, foreboding and reeks of darkness and dirty deeds. A single panel featuring a character that is just standing there can be as ominous and compelling as an action sequence with punches, lasers and mayhem and visual tone this pair can set is amazing. Bagenda’s pencil work is very strong and Fajardo’s colours are on point, and I found myself wondering what this pair could do with a Batman tale. A Gotham with the visual tone of The Omega Men could be an amazing thing…

The Omega Men #9 is a fantastic comic. These storytellers are firing on all cylinders and the master plan they have been executing since the beginning of the series is paying dividends now for readers as the mayhem kicks into the next gear. This title is a sure bet every month and issue #9 is no exception to that rule. One can only hope that Rebirth features something as unique in tone as Omega Men, because this series is something special in DC’s lineup.