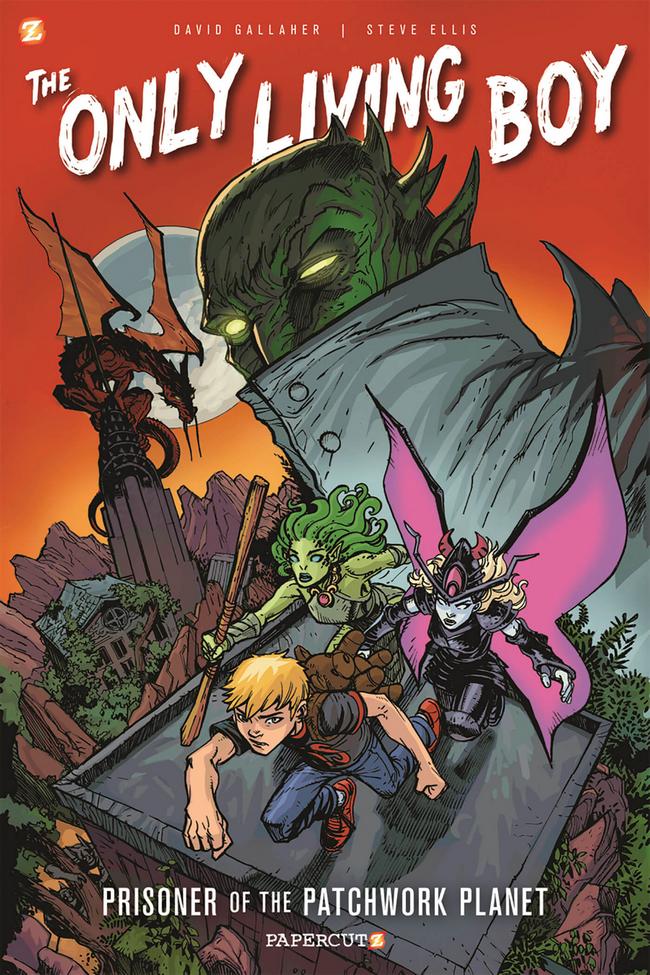 “At my age, everything feels like the wrong choice.”

Erik Farrell, a twelve-year-old boy is the center of The Only Living Boy: Prisoner of the Patchwork Planet #1. Originally serialized as a webcomic, The Only Living Boy is collected into book form by Papercutz for all of us readers who are a little more touchy-feely, available in both hardcover and paperback editions at comic shops and bookstores everywhere.

Co-creators David Gallaher and Steve Ellis have made the book available in limited edition and quantity at past convention appearances, but thanks to this new edition, the farthest you’ll have to go is your local comic shop. Or maybe your keyboard, if your only source of acquiring hardcopies is from an online retailer. However you choose to get it, purchase it knowing that this is, indeed, an all-ages friendly comic. Yes, there’s some violence and precarious situations, but it works within the story and it isn’t so severe as to displace the all-ages tag.

Gallaher and Ellis dedicate this to “anyone who has felt lost and longed for greater adventures.” And let’s be honest, that is every single one of us reading this review. And it’s every single one of those people we know who read comics, but maybe don’t read reviews. And it’s anyone who has doodled in the margins of a notebook, cried into a pillow because they just don’t belong, or ran away without no clear destination in mind and no shoes on their feet. This is the story of an everyday boy in a world that is anything but every day.

From the start, this book is unpredictable and chaotic, but in a fun, entertaining way. The Only Living Boy opens with a full-page splash of Erik’s face, a bit bloodied, but mostly intact, lying on a bed of foliage. From there, letterers Scott O. Brown and Christy Sawyer don’t follow normal conventions with the lettering of this book. Captions are rough and jagged, straining against symmetry to live organically and to breathe the story upon the reader, word balloons contain italicized text that challenges the borders of those balloons, infusing every word with urgency and energy.

The story hits the ground running. Gallaher and Ellis divulge that Erik is running away, but spare readers the details of why or from what. All we need to know if Erik is not looking back. He has made a decision and he is now going to have to live with the ramifications. And in that decision, Erik invites the readers to join him.

I started out thinking The Only Living Boy was part Jungle Book, part Kamandi, part Peter Pan, and part Huck Finn, but I realized, while this book clearly nabs inspiration from all of those sources, it really isn’t any of those. It’s not even close. It has obvious attributes inherited from those tales and packs in similar tones to Abadazad and Weirdworld, but this is a unique tale that cuts through to stand on its own. Gallaher and Ellis have crafted a strange new world for us readers and dropped us right alongside Erik. We know as much as he does, but he has enough tenacity to make the journey enticing.

Ellis’ art is gritty and rough, heavy on shadows and filled with lively energy, like Mike Ploog crossed with E. H. Shepard. New encounters are shrouded in darkness, easing into the spotlight to facilitate synchronized experiences between reader and Erik. Spindly and animated, with disproportionate – but mostly accurate – hands and feet, eyes and hair, Erik isn’t a mini adult rescued from a dryer, he’s a tween. He’s on the cusp of being a teenager and discovering way too soon that he doesn’t know as much as he thought he did. He’s awkward and forced to deal with a situation he’d rather run from. Around him is a mysterious, but achingly familiar world that Ellis gives just enough detail to, but more than detail, he fills the world with peril. Each panel has so much to offer the reader, but the story keeps the reader from lingering.

That story has Doctor Once as the villain of the piece. A calculating scientist more curious than sinister, but curious enough to be sinister, his disfigured body may or may not be the direct result of experiments he boasts about and seeks to continue. Once’s supporting cast is mysterious and ominous, providing Erik with allies simply through common opposition.

All of this and so much more, like Raj Nod and the Groundlings, Mermidonians, and Baalikar make The Only Living Boy: Prisoner of the Patchwork Planet a brilliant first taste of a world that offers peril and excitement. Readers are given just enough to begin to perceive the world alongside Erik, as Gallaher and Ellis provide a textbook example of both all ages storycraft and worldbuilding. This is a frightening and electrifying new world, and with Erik Farrell at the center, we’re ready to explore it all. Bring it on, I say.