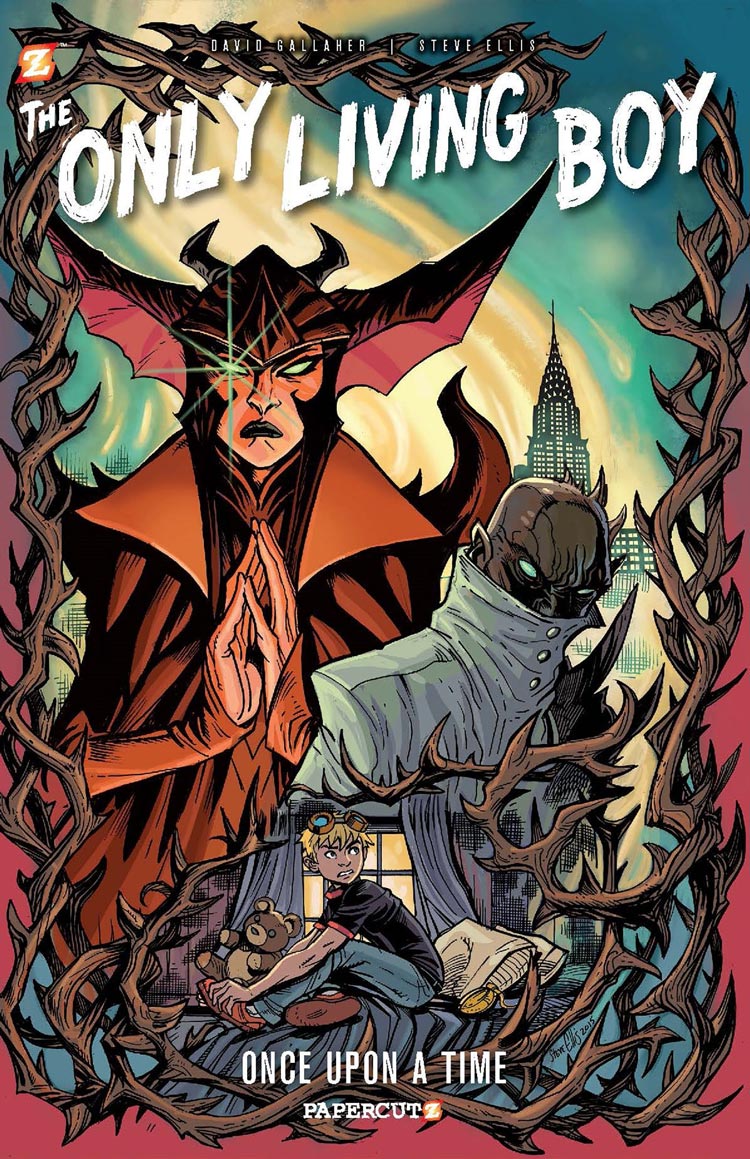 THE ONLY LIVING BOY Volume 3: ONCE UPON A TIME
Written by David Gallaher
Art by Steve Ellis, Holly McKend, and Melanie Ujomori
Published by Papercutz
Release Date: October 18, 2016

“Some days, your bad decisions will stare you right in the face.”

That’s the dialog writer and Only Living Boy co-creator David Gallaher uses to open The Only Living Boy: Once Upon a Time. Artist and co-creator Steve Ellis matches that with a plate of sunny-side-up eggs and bacon staring back at Erik Farrell, our protagonist and the titular Only Living Boy.

The Only Living Boy: Once Upon a Time opens with Erik at home in his kitchen, talking to his mom. The conversation focuses on the day ahead and Erik’s challenge of adapting to a new school. The visuals are packed boxes, shadowy corners, and bits that tug at memories Erik has not been able to access to this point in the series.

Ellis and Gallaher meld nicely together, with the shadowy, crosshatch heavy art mirroring the mystery of the story – how did Erik get back home? Was everything else a dream? Why does his mom not quite seem invested in their conversation? All of this piles on the anxiety until, finally, Erik’s mood alters the story and propels The Only Living Boy: Once Upon a Time into conflagration.

The rest of the issue plunges into the shadows of conflict, doubt, and suppressed memories. Baalikar takes center stage for a bit, giving readers a measure of his abilities, personality, and ferocity. The ruler of the world has Erik in his clutches, which then brings about the dramatic return of Doctor Once, whom Erik had hoped to never see again.

As readers might surmise from the title of this issue, however, Once is critical to this installment, as revelations abound in the pages of The Only Living Boy: Once Upon a Time. Gallaher and Ellis provide some background on the Doctor, and further fuse the fates of Erik and Once.

Visually, Ellis pushes the limits a bit more in The Only Living Boy: Once Upon a Time. The flashback or “home”-based scenes are a bit more traditional in their layouts and page design, with gutters and rectangular panels delivering the story, but anything on the world of Baalikar’s rule is jagged and edgy, pitched at an angle that does as much to pinch the art as it does to add urgency and uncertainty to the page.

Home has calmer tones and trends towards pastels, while the world at the center of the story is filled with sickly, saturated tones and frequently pushes the colors out of the shadows, rather than shading the colored planes. Chaos rules the visuals of the other world, amplifying the message present in the words of the story.

Ellis takes one particular memory and etches it onto the page with disturbing cross-hatching and rich, dark blacks that would make Bill Sienkiewicz proud. That memory serves to turn the story, define Erik, and give the readers new information to move forward with.

The Only Living Boy: Once Upon a Time is a turning point in this series, as old allies return, flashbacks peek into what was and what happened, new, unexpected allies materialize, and the origins of the enemy and the predicament that brought about the world at the core of this series become clear.

This is a payoff installment for readers who have been aboard since the beginning. Gallaher and Ellis do a great job of buttoning up some questions in this third installment (Chapters Five and Six) while opening up the possibilities for the next and future installments. I’m as stoked to continue reading this series as I was at the start, and, now that I have three books together, it seems like a great time to make one long read of it all.