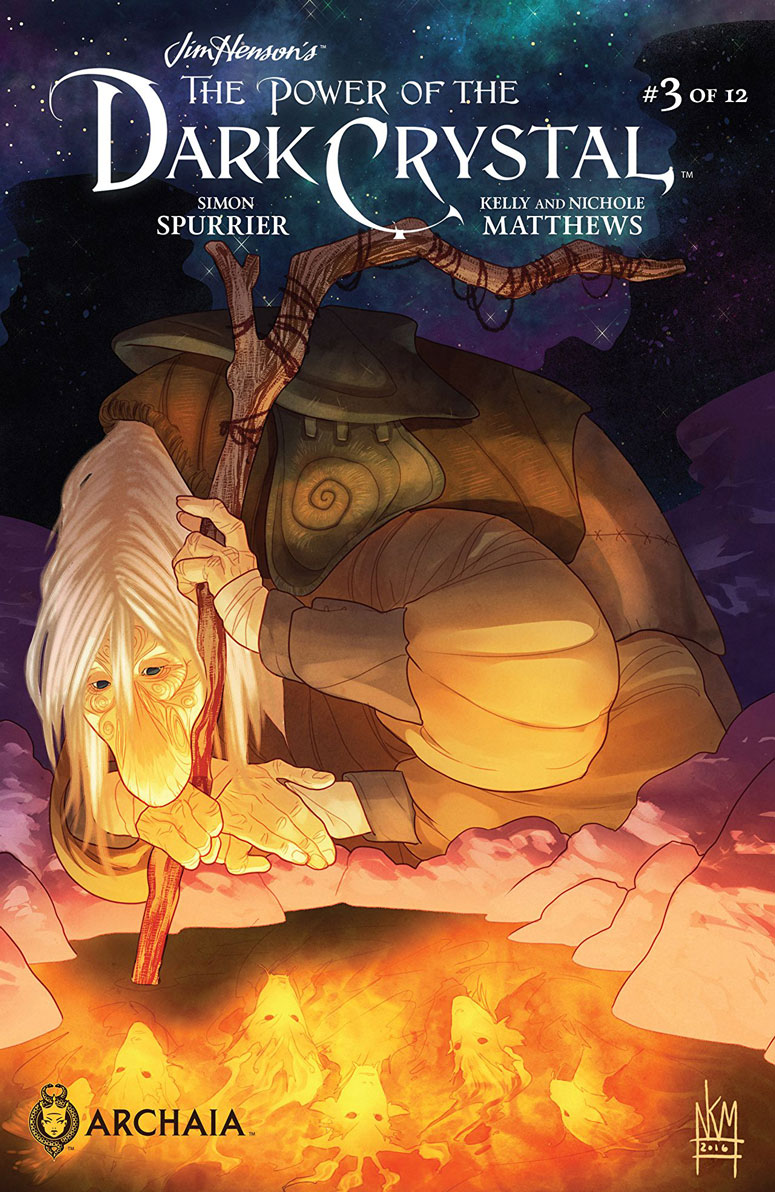 THE POWER OF THE DARK CRYSTAL #3
Story by Simon Spurrier
Art by Kelly Matthews and Nicole Matthews
Published by BOOM! Studios
Release Date: May 24, 2017

“She is part of you, as we all are part of each other,” reveals the oracle Aughra in the 1982 cult classic movie The Dark Crystal. Over the past 30 years the Jim Henson movie has become a part of us all as a fond memory.

Finally a sequel has been made, but as a comic book. The story picks up many years later and reveals that it is not only the Gelflings that rely on the Crystal but all inhabitants of the planet of Thra.

The writing in The Power of the Dark Crystal #3 picks up the pace from the story that has happened so far in the first couple of issues. The story so far has been largely different from the world of the movie that we know and love. Simon Spurrier presents us with a new world where zealotry has turned the ideal civilization into a world of peace but prosperity is only for a privileged few.

With the return of the Skesis the story turns to chaos for the characters but flows well for the reader. Spurrier has done an excellent job of capturing the behavior of the evil creatures as the movie portrayed them. For example the simple minded but conniving Chamberlain is brought to life on the page both in his actions and his whimpering words.

Although they are evil, readers who have seen the movie before will get a big nostalgia kick from seeing them again. If you are a new reader, though, parts of the story may be a little confusing to you. Some form of narration would have been a great help throughout the series since it has been so many years since the movie. Nonetheless it is still an enthralling story that will keep the reader coming back for more.

The Matthews’ artwork is lovely. It gives the sequel its own vibe leaving behind the more textured feel of the original story. The original story had a more lived in feel to it and showed the viewer that there was a history to this world. The style of art for this sequel sets the stage for it being a whole new world that has been remade in the Crystal’s image.

The Matthews’ design is influenced heavily by a Utopian fairy tale look akin to a Maxfield Parrish illustration. It will be interesting to see how this changes though as the world is begins to become corrupted. The use of pastel colors fits well for the Gelflings but not quite as good for the Skesis who don’t look as menacing as they did in the movie. The Matthews’ style fits Kensho the Fireling very well, though, as she is a completely new race. The art is beautiful throughout, though, it doesn’t always fit the entire story.

Overall this is a good book. If you are a fan of the Dark Crystal world then you should definitely pick this issue up. It has had a little bit of a slow start but it is coming into its own with this issue. The artwork is gorgeous to take in and the story gives fans what they have wanted for many years. It will feel good to return to a world that has been a part of our imaginations for so long.