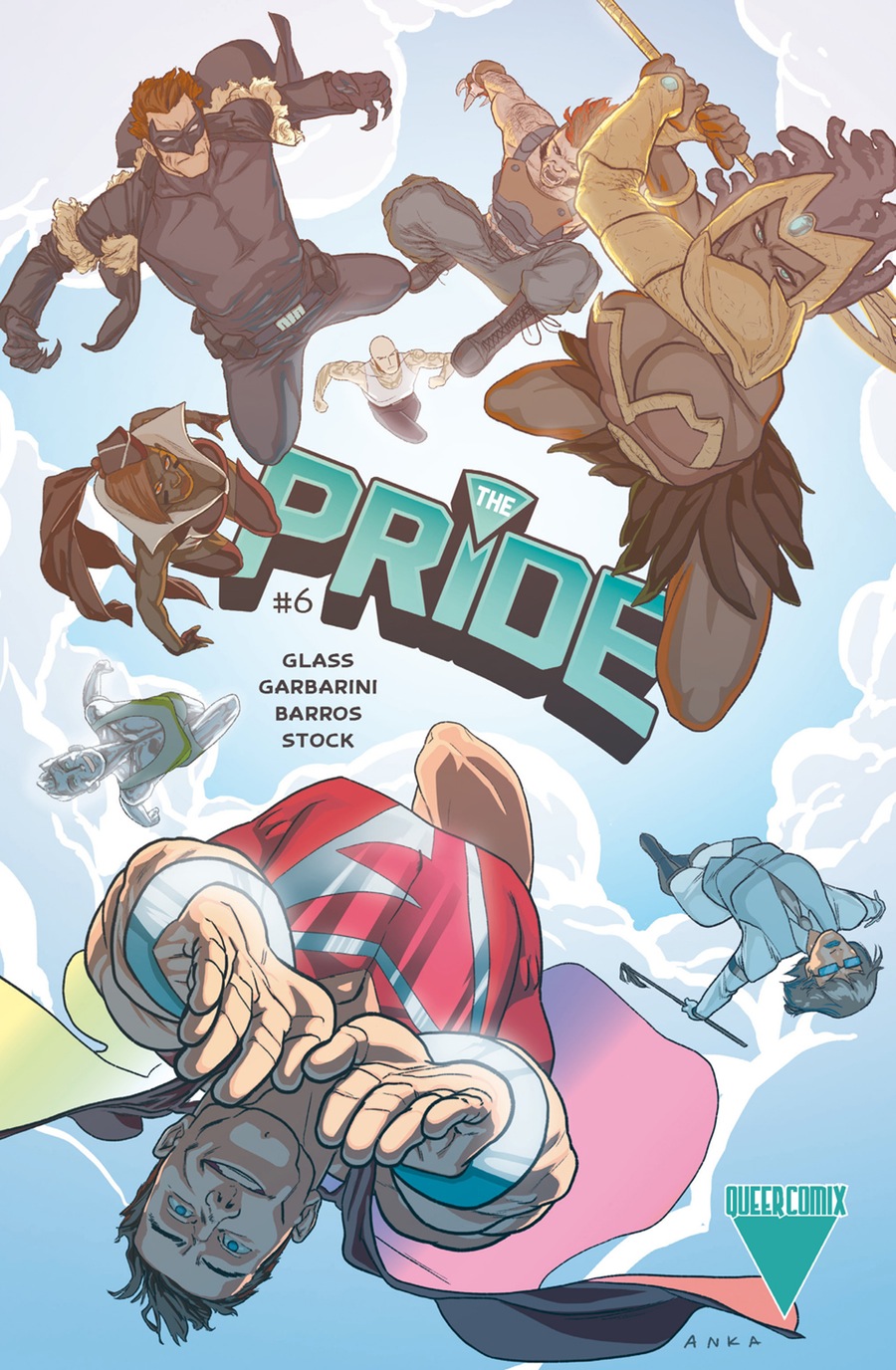 Tired of super-hero teams with 6 white guys, a single woman, a Black dude, and MAYBE a lesbian? Over subtext driving your representation on the four-color page? Time to up the ante on queer comics and check out The Pride.

It’s no secret I want to see more LGBTA content in today’s comic market — and specifically in super-hero comics. I grew up on a steady diet of capes and cowls, and it never ceases to touch me deeply when one of them, hero or villain, reflects back my experience as a gay man, as an outsider to the overriding sexual culture that permeates media still today. It has become so frustrating, in fact, that I feel compelled to boycott spending on an entire company’s line until a self-described LGBTA comic lead is presented. And I’m not holding my breath, sadly.

But when I pick up a book like The Pride, or Secret Six, or Midnighter, or Catwoman, I get something powerful that resonates like heroes did to me as a child. It’s more than recognition, more than celebration. It’s seeing my value as a human being amplified on the page. That’s damn important stuff to me. And I’m not alone.

The Pride #1-6 begins to tell a story about the diversity of the LGBTA community, and it, like all media, has a way to go to represent it most fully. But it is a valiant beginning of what I hope will be a long tenure of publishing some fun characters that have the potential to touch readers who need the validation it provides. Writer Joe Glass has assembled a group of characters that still feel dominated by gay and white cultural concerns, but strive to expand their ranks like any other forward thinking queer organization would. 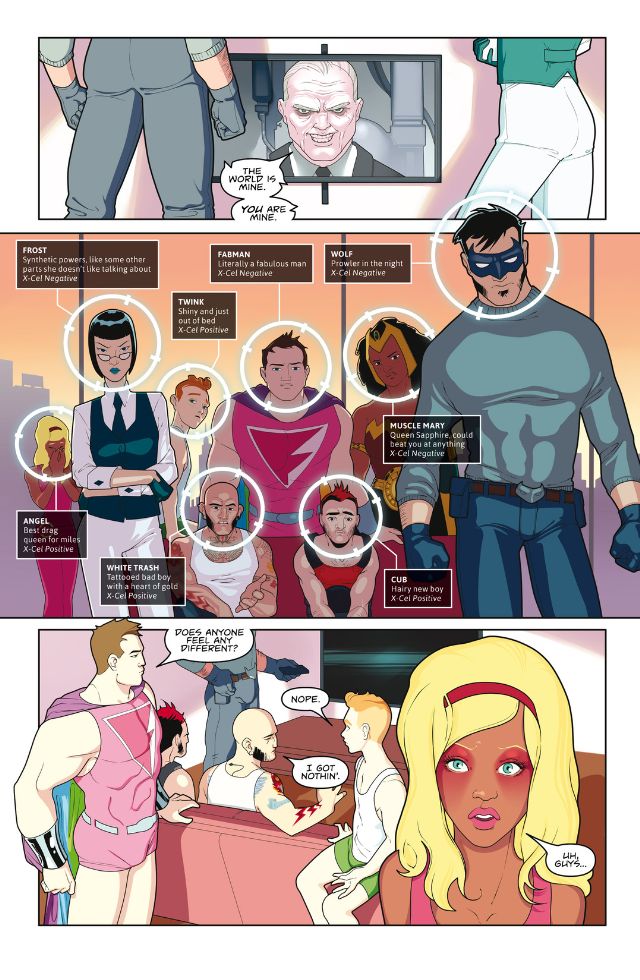 Depicting a brand new super-hero team founded on the idea that positive queer representation will lead to more acceptance, Glass is delivering a pretty straightforward narrative that we see play out in the media and our own discussions as comic readers fairly frequently. But it’s in the smaller moments throughout the six-issue mini-series (and accompanying three-issue title, The Pride Adventures) that starts to break the mold for the first all-LGBTA hero team. Romance developing without overly sexualizing the interactions is something we’ve only recently seen in comics, but there are a few other sophisticated developments that pricked up my ears as I was reading.

The introduction of trans character Angel and the subsequent revelation of her sexuality is a nice nod to the complications and assumptions that come along with mixing sex assignment, gender performance, and orientation. But the storyline involving Bear and his son, Cub, that dominates the latter half of the series is the one that touched me the most. It is very rare to see stories about men who come out later in life, post-marriage, post-children, and even more rare to see one with Bear’s circumstances. Both he and his loving son (straight, but still ultimately a member of the Pride) are greatly unmined territory for a plethora of stories that I hope get followed up on in later books.

While the art on the series starts out a little rough in early issues with Gavin Mitchell’s pencils and inks, The Pride blossoms with the introduction of artists Hector Barros (issue #4 pencils, issue #6 inks), JD Faith (issue #5 pencils), and Maxime Garbarini (issue #6 pencils). Barros in particular adds a lush, textural vibe to the issue’s focus on Bear, giving both a ferocious and highly sexualizing rendering to almost all of the characters. The action is fast and compelling, with panel construction making the most of moving the readers’ eyes across the page. 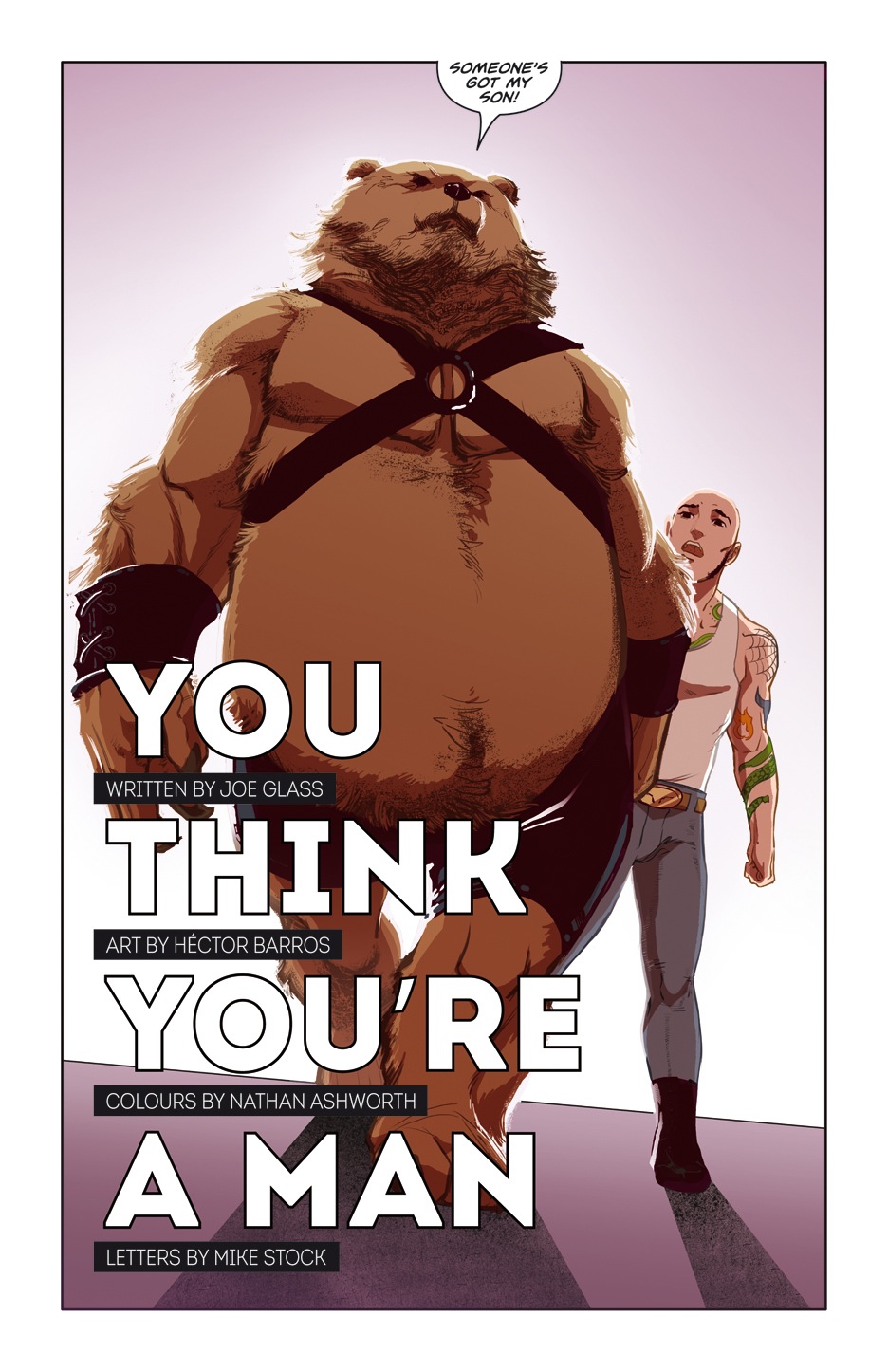 Garbarini’s illustrations of the team in issue #6 is much more standard super-hero fare, but picks up on that “Crisis of Two Worlds” vibe in the Pride’s standoff against the prevailing super-hero team of their universe. His work is most eloquent, however, in the book’s final scenes, depicting perhaps my least favorite character in one of the most powerful moments. It’s a true example of how much of a difference the right artist can make to a scene, and how much that choice makes me want to come back for more.

A fun romp through a new universe is never going to feel as cohesive and grounded as stories told in books we’ve read since childhood, but for building from the ground up (and pinching some of the better tropes of DC and Marvel characterizations), The Pride manages to deliver a lot of enjoyment with a lot of potential to soothe the queer soul. If you’re looking for the kind of old school adventure featuring characters you don’t need to project quite as hard onto to see your own experience — particularly at a time over 30% of the market refuses to do so — this is definitely the book for you.