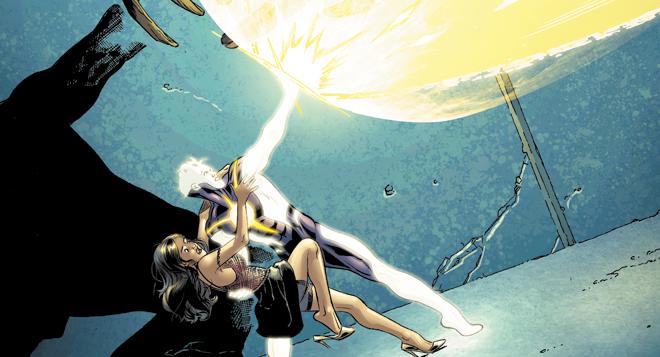 The Ray, even though it is just a mini-series, embodies everything that the New 52 is doing right. This is going to sound cheesy, but it really is a shining ray of light in the New 52. Justin Gray and Jimmy Palmiotti have done a great job with issue #3 of progressing the story while keeping it light and entertaining. The Ray is not bogged down in woe and sadness, and unlike 50+% of the titles DC is putting out, we aren’t in the depressed shadow of Gotham. The world The Ray is fighting in has some hope, some humour, heart, and, now, some fantastic action to go along with it. There are points where the villain in this issue is laughable, but in a good way: this guy is bonkers and Gray and Palmiotti temper his whackiness by making him a credible threat and a viable villain for the young Ray. The Ray shouldn’t be going toe to toe with a Mongul or Doomsday, he’s too new to the superhero game, but there are some great moments in the issue where our title character realizes how new he is and the ramifications of having powers. The serious moments blend masterfully with the humorous to create a book with drama and some heart. Gray and Palmiotti have certainly made a case with this issue and it’s predecessors for this to be an ongoing in the DC Universe at some point.

In keeping with the quality of the past two issues, Jamal Igle adds a unique flair to the book with his sharp pencils. This book is as visually bright as it should be, the title character is a living being of light, and the art does that fact justice. The Ray #3 is a great example of excellent superhero art and is one of the most visually impressive books I’ve seen from DC this month.