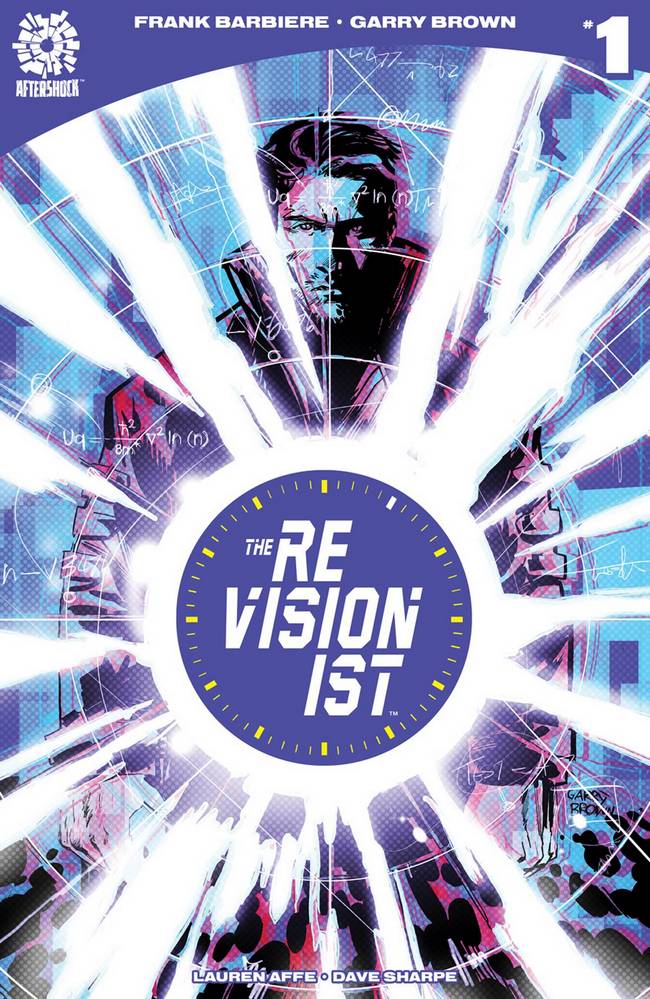 Boom. That is how you create a comic. The Revisionist #1 from co-creators Frank Barbiere and Garry Brown is one of the best first issues I’ve read. From cover to cover, this issue is packed with action, intrigue, and beauty. Barbiere, Brown, colorist Lauren Affe and letterer Dave Sharpe have put together the full package here, and I strongly urge you to sign yourself up for the fun that’s in store with this series.

Though this issue doesn’t necessarily set up the big picture stakes of this series, it does drive you headfirst into the craziness to come. Martin Monroe, a former model inmate current Revisionist, finds himself bestowed with a gift from his father. This gift comes in the form of reality-bending powers and super-tech of the highly explosive variety. When the prison life turns extra sour for Martin, he finds himself launching his body off a building, followed by a gang of unseemly and dangerous men. But how he gets there? That’s for you to unravel.

What Garry Brown has achieved in this book is nothing short of full-blown kinetic beauty. His energetic style fills each and every corner with the most gorgeous frenzy you can feast your eyes upon. While action is high, emotions run higher and every line perfectly depicts the story in an easy-to-discern forward-moving manner. Backgrounds are detailed, but not overly busy. Characters have souls in their eyes. Simply put, Brown’s art makes you feel in the best of ways. Lauren Affe is a truly talented colorist, boosting the sci-fi elements with bright hues. The color schemes move each page forward, approaching neon bliss in moments of high-energy, but calmly progressing the story in moments of exposition. Dave Sharpe’s lettering is clean, carefully narrating the story in the least obtrusive, but still pleasantly readable way possible. I’d be hard-pressed to find someone that doesn’t think this is a damn good-looking book.

Frank Barbiere has managed to take a sci-fi subject that is not exactly untouched and turn it into something bright, shiny, and new. I couldn’t believe how fast I was hooked into the story, how quickly I cared for Martin and his world. Barbiere gives readers a glorious taste of what’s to come as the story progresses, but skillfully leads us there with an extended flashback that gives root to the players in the game and the nuance of the plot. Right away, the world feels lived in; Barbiere is clearly confident in his characters, as he should be. I really enjoyed each bit of narration, bringing me closer to the nugget of wisdom at the heart of this story, and I enjoyed it right alongside the whip-fast dialogue and character development. It’s not often that I find myself grasping each word on the page, yet feeling as though I’ve arrived at the end in no time at all. The only thing I found myself wanting for was a formidable antagonist, so far. While Herschel certainly seems like a man worth Martin’s time, he’s almost too small as a foe for Martin to handle. Perhaps the secrets uncovered in this first issue are but the tip of the iceberg, and, ultimately, I trust Barbiere to provide a compelling enemy in the future.

While I generally seek to highlight the positive in books I’ve read that I’m excited about, I can’t say that I found many reasons not to read this book. This promises to be a solid sci-fi story with a great leading character and plot. This is a book that will make you excited about comics. Barbiere, Brown, Affe, and Sharpe delivered one of my favorite issues of the year, and I’m chomping at the bit for more.